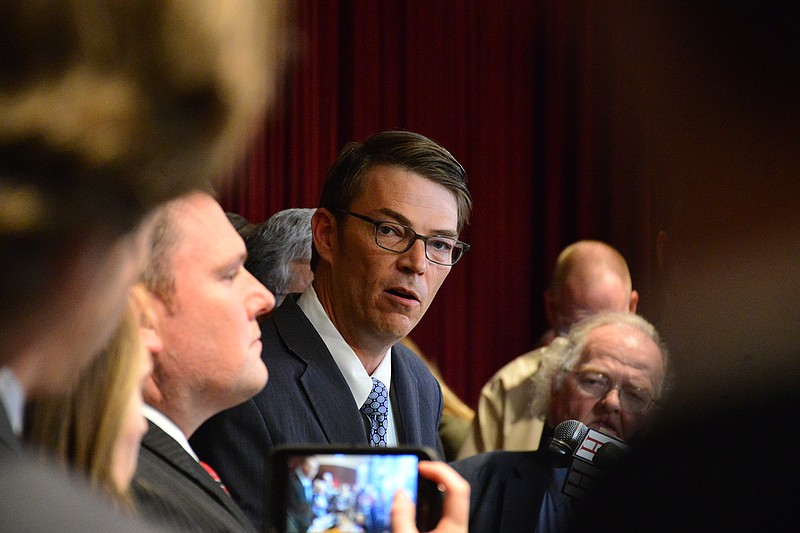 House Speaker Todd Richardson, as well as members of House Republican leadership and members of the House Special Investigative Committee on Oversight, hold a news conference Wednesday in the House Chamber to release a report on Gov. Eric Greitens' legal situation.

The News Tribune has been following the investigations into Gov. Eric Greitens for months as they have developed. For a full look at coverage of the House committee's investigation and other related issues, go to newstribune.com/greitensinvestigation/.

And the Legislature's leaders said they are considering calling themselves into special session to deal with Greitens' legal situation.

Hawley, a Republican in his second year as the state's top lawyer, is considered to be the GOP frontrunner in this year's elections to challenge McCaskill, a Democrat seeking her third six-year term in the U.S. Senate.

Both commented after reading the 25-page special House report on Greitens' affair that began in March 2015 and included some activities that led a St. Louis grand jury to charge him with felony invasion of privacy.

McCaskill said: "It is clearly time to put the interests of the people of Missouri first. The governor should resign."

Hawley said: "The House Investigative Committee's report contains shocking, substantial, and corroborated evidence of wrongdoing by Gov. Greitens. The conduct the report details is certainly impeachable, in my judgment, and the House is well within its rights to proceed on that front. But the people of Missouri should not be put through that ordeal. Gov. Greitens should resign immediately."

In a five-minute statement delivered to reporters packed into his Capitol office, about 45 minutes before the House report was to be released, Greitens said he expected the report "will include lies and falsehoods.

"This is a political witch hunt. In just 33 days, a court of law - and a jury of my peers - will let every person in the state of Missouri know the truth and prove my innocence."

House Speaker Todd Richardson, R-Poplar Bluff, countered later: "Let me be very clear about this - This is not a witch hunt, and the committee had no political agenda. Their job was not to make their own conclusions, but to hear testimony and to judge the credibility of witnesses."

At a news conference Wednesday evening, Richardson noted the Special Investigative Committee on Oversight has extended its work through the end of the session on May 18.

"Chairman (Jay) Barnes and the members of the committee have work remaining," Richardson noted, "and they have informed me that they will not be in a position to provide recommendations to the members of the Missouri General Assembly before the end of our regular session.

"So, in order for the General Assembly to remain focused specifically on the tasks that Missourians count on us to complete, (we) will begin the process of calling a special session so that the Legislature has the opportunity to consider any recommendations of the committee."

"I think that's possible but probably about five weeks premature," she said. "We still have five weeks to do the work that we are here to do - and this is probably the most important thing that we could do, at this point."

McCann Beatty renewed her call for Greitens to step down.

"It is clear to me that this governor must resign and, if he fails to do so, I believe that we should begin impeachment proceedings," she said.

The governor took no questions from reporters after making his statement, which again admitted to having an affair.

"It was a private mistake that I regret every day," Greitens said. "This has nothing to do with government, and shouldn't be about politics. But people are turning that personal mistake into a political spectacle and telling you lies about it."

Greitens told reporters he expects the report to include "tabloid trash" and compared news coverage of his affair and the legal issues it's raised with "the witch hunts in Washington, D.C. - smearing, lying and attacking people who want to change how things are done is wrong in Washington and it's wrong in Missouri."

But Richardson said: "I completely disagree. This was a report prepared by some of the most respected members of the General Assembly who, I will note, did not make value judgments about the conduct. They simply looked and heard the testimony and did their best job to collect that testimony, and made judgments about what they thought of witness credibility."

While special sessions generally are called by the governor and can last up to 60 days, voters in 1988 approved a process for lawmakers to call themselves into a special session for up to 30 days - if three-fourths of the members in each chamber sign a petition seeking that special session.

Senate President Pro Tem Ron Richard, R-Joplin, told reporters that process likely would begin next week and - if they collect at least 123 signatures in the House and 26 in the Senate - he expects the special session officially would begin at 6:05 p.m. May 18, five minutes after the regular session must end.