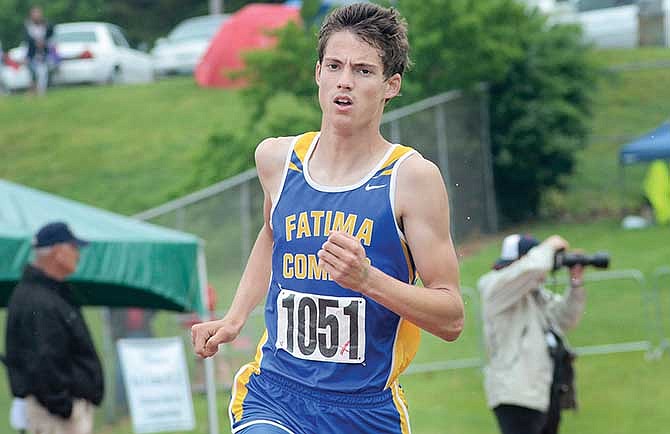 Fatima senior Tom Zeilman competes in the 1,600-meter run during the Missouri Class 2 track and field championships Saturday at Dwight T. Reed Stadium. Zeilman finished second in the event and won the title in the 800-meter run Saturday.

After securing a third-place finish Friday in the 800-meter relay with a race-best 1:54 leg and finishing second in the 1600-meter run Saturday morning, he put himself atop the podium with his final run at the Missouri State High School Activities Association Class 1-2 Track and Field Championships. He didn't match his relay split, but his sub-2-minute mark was still fast enough to win the state title in the Class 2 boys 800-meter run.

Zeilman said he started too slowly to finish in front during his 1600-meter run, so he made sure to start out fast in his final run, a strategy that catapulted him forward seven spots in yesterday's relay.

"I ran the 800 a little bit more aggresively to try to take the lead from the beginning and just keep it through," he said. "I felt like my speed had enough to carry me."

Zeilman led Fatima to 24 points in the Class 2 boys competition, putting the Comets in seventh. That's best among area schools, with South Callaway coming in 14th (15 points), Eugene placing 20th (11 points), Russellville in 47th (2) and Vienna sitting in 52nd with one point.

Eugene's scoring all came from Garrett Crouse, who finished fourth in the boys 100-meter hurdles and third in the 300-meter hurdles. He was the lone Eugene representative.

"I feel proud that I can represent our school and show that Eugene is on the map," he said. "It honestly does feel like one of the best feelings in the world, just being able to be out here, and hopefully it will encourage the rest of the people when Eugene gets a bigger track team."

South Callaway tallied points in the 4x200-meter relay (eighth place) and the 4x100-meter relay (sixth). Cory Hanger earned a point for the Bulldogs when he finished eighth in the 400-meter dash. Josh Brooks came up one inch short of a medal with his ninth-place finish in the discus throw. Terry Miles failed to add to South Callaway's score with his 12th-place finish in the 800-meter run.

Alan Murphy finished seventh in the pole vault for Russellville, earning the Indians' only points in the Class 2 boys competition.

A day after finishing eighth in the 3200-meter run, Vienna's Chandler Harker finished 11th in the 1600-meter run.

Linn's Arik Cockrum, Linn's only state competitor of the weekend, finished ninth in the pole vault.