Press Box: No more waffling, Lawrence and the Jaguars finally have things covered 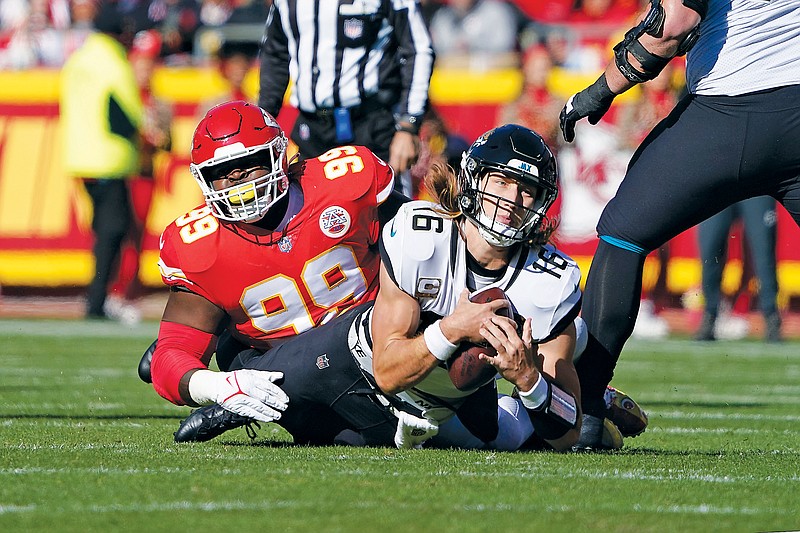 We can’t give credit to the scattered and covered hash browns, because Trevor Lawrence didn’t place his order until he was done with one of the greatest comebacks in NFL playoff history.

Still, a late-night trip to Waffle House after an improbable victory is a striking metaphor of just how far the Jacksonville Jaguars have come from the Urban Chop House.

The menu may not be as swanky, but the grub is sure a lot more comforting.

Yep, the team that not-so-long ago made a strong case for the worst franchise in all of professional sports is now prepping for today’s AFC divisional playoff game against the top-seeded Kansas City Chiefs.

And if the Jaguars somehow pull off another upset -- the Chiefs are a hefty 8½-point favorite -- they might want to start checking on possible dinner spots in Arizona, site of this year’s Super Bowl.

(Not to worry, Trevor, we’ve counted up 10 Waffle Houses around the Phoenix area.)

Lawrence, the young quarterback with the Fabio hair and all the swagger of a romance novel Lothario, has steered one of the most remarkable turnarounds in NFL history -- especially when you consider where this franchise was roughly 13 months ago.

Meyer’s missteps in a brief-but-not-nearly-brief-enough reign are too numerous to document, but he’ll forever be remembered for ditching his team to stay behind in Ohio after a loss -- supposedly to spend time with family heading into an off week, only to turn up on social media snuggling with a woman who was not his wife at the bar next door to his Urban Chop House restaurant.

After reaching the nadir of their long-bumbling existence, it was hard to envision the Jaguars reversing course so quickly.

But here they are, getting ready for another playoff game a week after rallying from 27 points down against the Los Angeles Chargers.

“I will say that being 27 down, you’re scratching your head going, ‘OK, can we do this?’” coach Doug Pederson conceded. “There was a lot of belief at halftime that we could. The guys felt it and it just showed me again how close this group is, how tight this group is. No matter what adversity or challenges that face us, we’re willing to take them on, to tackle them and overcome them.”

That comeback against the Chargers, which produced a field goal on the final play of the game for a 31-30 victory, is just the tip of what’s becoming The Jacksonville Miracle.

A franchise that had made the playoffs only three times since the turn of the millennium endured a five-game losing streak that wiped out all of October, and seemed down and out with a 4-8 record at the beginning of December.

Sure, it helped to be in the AFC South, where the favored Tennessee Titans totally collapsed and no other team posted a winning record.

But let’s not diminish what the Jaguars have done, and especially the Coach of the Year job by Pederson.

A Super Bowl winner in Philadelphia, he picked up the pieces after the Meyer debacle and taught his youthful team how to win.

Beyond the Xs and Os, Pederson has demonstrated just how much he cares about his players by treating them with respect, which has meant so much after they were talked down to like children by Meyer.

When Pederson asks more from his players than they even know they have, there is no resistance.

Most important, the Jaguars -- after the lost years of quarterbacks such as David Garrard and Blaine Gabbert and Blake Bortles and Nick Foles and Gardner Minshew -- finally have the signal-caller who can lead them to the promised land.

Lawrence, the top pick in the 2021 draft, never wavered after throwing four interceptions in the first half against the Chargers, stunningly bouncing back to throw four TD passes like it was nothing more than flipping a switch.

“I think quarterbacks, coaches, we’re measured on championships,” Pederson said. “Trevor is 1-0 in the postseason. That’s a start. Not where he, obviously, or myself, where we need to be or want to be, but it’s a start in the right direction, much like this season has been for us.”

Lawrence already knows how to take a group to Waffle House, introducing several of his teammate to the iconic diner in the giddy aftermath of their win against the Chargers.

Even though he threw another pick while ordering -- he asked for cheese on his hash browns, when every Waffle House aficionado knows that’s not how it’s done -- he rallied at the end with a pecan waffle.

“Is it smothered?” Lawrence asked, when someone posed if he knew the official Waffle House term for hash browns with cheese. “I just say cheese. I probably should say …”

Trevor, we’re gonna stop you right there. The correct term for cheese is “covered.” If you ask for smothered, you’ll get hash browns sautéed with onions, though that’s not a bad audible.

Amid all the full bellies, this seems an appropriate time to issue a word of warning.

Just five seasons ago, the Jaguars made a fluky run to the AFC championship game and were literally one stop away against Tom Brady and the New England Patriots from advancing to their first Super Bowl.

This tastes different, however.

The Jaguars, it seems, finally have things covered.

Paul Newberry is the national sports columnist for the Associated Press. Write to him at [email protected].