Lawrence’s 37-0 record on Saturdays at stake vs. Chiefs 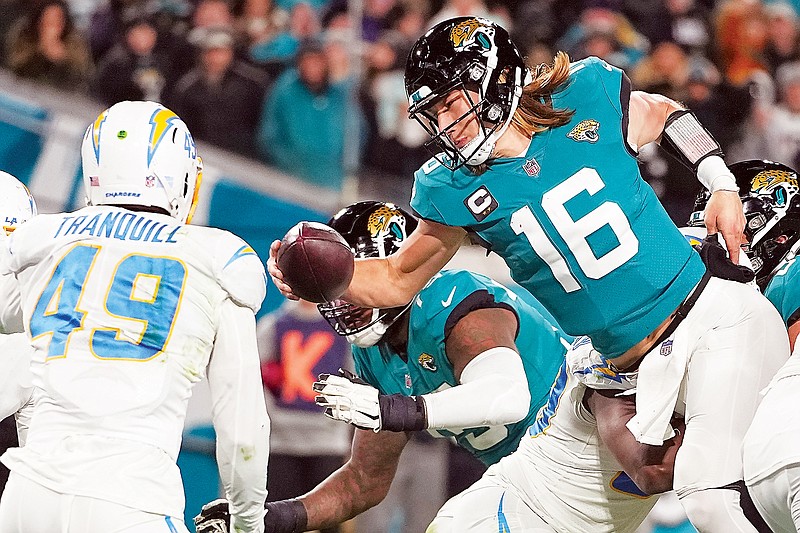 JACKSONVILLE, Fla. -- Doug Pederson turned away from the question, stopping just short of shaking his head in disappointment, and then tapped the lectern in front of him three times to mimic knocking on wood.

The coach refused to acknowledge or weigh in on Trevor Lawrence’s near-decade-long winning streak. Lawrence improved to 37-0 as a starting quarterback on Saturdays when the Jacksonville Jaguars rallied from 27 points down to stun the Los Angeles Chargers 31-30 in an AFC wild-card game. Lawrence’s undefeated stretch spans high school, college and the past two Saturday nights in Jacksonville.

He can make it 38 in a row when the Jaguars (10-8) play at Kansas City (14-3) in the divisional round Saturday. The Chiefs are 8.5-point favorites, according to FanDuel Sportsbook.

“I take a lot of pride in it ‘cause we play on a Saturday again,” Lawrence said. “It is what it is. I don’t really think about that. I think about we got to win this game to keep going, to keep playing, to keep our season alive. So that’s what I think about.

“Trying to go 38-0, if you want to put it that way. But about that streak or whatever, just honestly kind of a coincidence that I’ve had Saturday games on all three levels. But, yeah, let’s keep that going. That means we’re playing again next week. That’s the plan.”

Lawrence has no recollection of his most recent Saturday loss. He mentioned possibly a championship game in middle school before quickly following up with “but I think we won that.”

“I’m sure I’ve lost on a Saturday at some point,” he added.

Not one that Lawrence can remember.

His streak started as a sophomore at Cartersville High, about an hour’s drive northwest of Atlanta. He went 3-0 on Saturdays with the Hurricanes, winning state title games in 2015 and 2016 and then winning a road game near Jacksonville in 2017.

The streak remained intact throughout Lawrence’s three years at Clemson, perhaps the most impressive part of 37 in a row. The No. 1 overall pick in the 2021 draft went 34-2 as the Tigers’ starter, including 32-0 on Saturdays.

His two losses: Against Joe Burrow and top-ranked LSU in the 2019 national championship game in New Orleans; and against Justin Fields and third-ranked Ohio State in a 2020 semifinal game, also in New Orleans. Neither of those games was played on a Saturday.

His Saturday success was back in the spotlight the past two weeks with Jacksonville. Lawrence and the Jaguars beat Tennessee on Jan. 7 to clinch the AFC South and get the franchise to the playoffs for the first time in five years.

And then his most memorable Saturday victory came last weekend against the Los Angeles Chargers, a game in which Lawrence followed four interceptions with four touchdown passes and led the third-largest comeback in NFL postseason history.

Lawrence, nearly a dozen teammates and their wives or girlfriends celebrated with a late-night visit to Waffle House. Marissa Lawrence called ahead to get enough tables set aside.

Another Saturday victory -- Lawrence’s 38th straight -- would require a much bigger party once the Jaguars return from Kansas City.