Experts weigh in on cardiac arrest after Damar Hamlin’s collapse 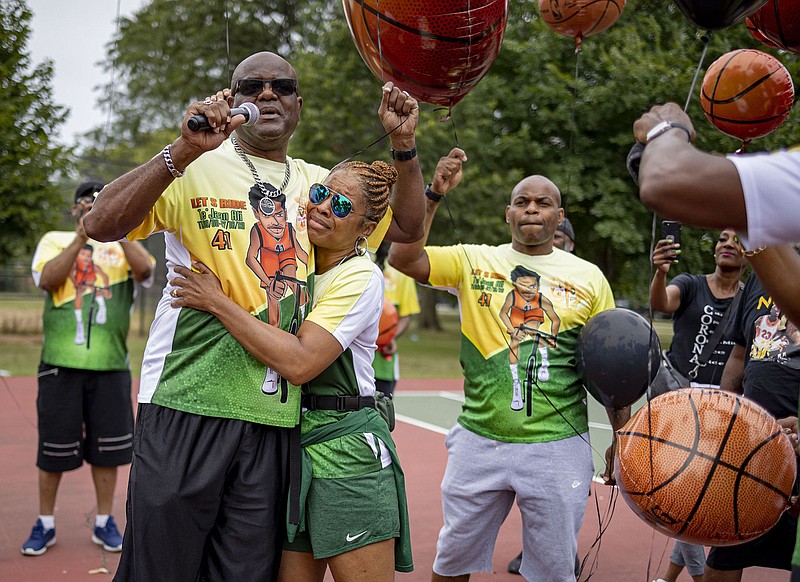 David and Janet Ali embrace during a balloon release in honor of their son, Te'Jaan Ali, on Aug. 14, 2022, at Ellis Park in Bronzeville during the third annual Let's Ride memorial event. Te'Jaan, 19, died in 2020 after collapsing during a basketball game at Emmett Till Math and Science Academy. (Brian Cassella/Chicago Tribune/TNS)

CHICAGO -- Te'Jaan Ali was playing basketball in a school gym on the South Side of Chicago when he started feeling hot. The heat in the gym -- which didn't have air conditioning -- was likely just as bad as the sweltering temperatures outside, which reached 90 degrees on July 18, 2020.

Ali, 19, stood in front of a fan and collapsed. Less than two hours later, he died in a hospital emergency room of a heart condition.

On Monday, football fans across the country watched in shock as a similar scene played out during an NFL game: Buffalo Bills safety Damar Hamlin collapsed during a game against the Cincinnati Bengals when he went into cardiac arrest after colliding with another player. Hamlin, 24, was in critical condition after receiving lifesaving measures on the field and being transported to a Cincinnati hospital.

The distressing situation only emphasized that sudden cardiac arrest in young people, while not common, can still occur. And, in the past few years, this grim reality has cut the lives of at least two Chicago-area young adults short -- including Ali.

"For the average young adult, this is rare, and even for the average athlete, this is very, very unusual. But we do see -- and we have to be very careful -- because we do know there are certain kinds of heart muscle disorders," such as cardiomyopathy or coronary artery disease, said Clyde Yancy, chief of cardiology at Northwestern University Feinberg School of Medicine and past president of the American Heart Association.

In Hamlin's case, experts believe the cardiac arrest to be the result of commotio cordis, which is a disruption of the heart rhythm caused by blunt force trauma to the chest at a specific moment of the cardiac cycle.

"It is the exact time point in the cardiac cycle in between heartbeats. There's a several milliseconds-wide window where that contact has to occur in order to create this heart arrhythmia, which eventually leads to a cardiac arrest," said Sean Swearingen, a sports cardiologist from Rush University Medical Center.

"The heart arrhythmia is a problem because it takes over from the heart's normal rhythm and it causes the heart to squeeze chaotically in a nature that does not allow it to generate enough blood pressure the rest of the body to keep normal organ function," Swearingen added.

It was a hot summer day in 2020 when Ali collapsed at a gym in Emmett Louis Till Math and Science Academy while playing basketball. Cook County medical examiner's office records showed that the 19-year-old died of hypertrophic cardiomyopathy, or HCM.

Tony Broadous, head coach of the men's basketball team at Portland Community College, coached Ali during his freshman year at the school. The coach and teacher remembered him for being a supportive teammate and "well-liked" by his peers.

Ali had moved back home to Chicago after a difficult first year. He had suffered a significant foot injury, which affected his training. Despite the setback, Broadous said Ali still showed up to practices and games to encourage his teammates from the sidelines.

"He broke a bone in his foot so he couldn't play for a while," Broadous said. "He was still at every practice and all the games cheering his teammates."

Broadous found out about the tragic incident from a text from one of Ali's closest friends. Knowing the energetic athlete he was, the news was shocking. He said he was unaware that Ali had any health problems other than asthma.

"Without a doubt it was totally, totally out of nowhere," Broadous said. "Just total shock and not knowing he had any health issues. We knew he had asthma, but we didn't know we had any kind of serious health issues like that."

HCM is a disease characterized by the thickening of the heart muscle. The heart is forced to work harder to pump blood. About 1 in 500 people are estimated to have the condition, but a "large percentage" of patients are undiagnosed, according to the American Heart Association. HCM is the leading cause associated with sudden unexpected cardiac death in the United States.

The medical examiner's report for Ali's death said hypertrophic cardiomyopathy is a major risk factor for sudden cardiac death in the young, especially during exercise.

Learning about Ali's death was especially painful for Broadous after seeing one of his past players die of cardiomyopathy in 2005. To see another athlete die too soon was "gut-wrenching," he said.

"When you lose a kid, it changes your philosophy," Broadous said. "More than anything, I just try to keep the memories alive. The young men who passed in both situations, they're just really wonderful guys."

Ali was the kind of player who was eager to take on a challenge.

"He was more suited to be an inside post type player, but he wanted to shoot the 3s, which made us laugh," Broadous said. "He was just a real fun guy, got along with everybody."

He remembers Ali as a "fun, silly guy" and a "gentle giant," as he stood nearly 6-foot-9. He said Ali was also an "outgoing" person, a friend to everyone. Broadous said he went outside of the typical cliques that student-athletes can exist in and always made an effort to treat everyone as "special."

"People looked up to him," Broadous said. "He was on the basketball team so people thought he's somebody special, so he would treat people special. It's because he knew that he was in a privileged situation, so he would make sure that he would try to make other people smile and say nice things to people who didn't have the connections that he had by being on the team."

Less than two years later, on Feb. 8, 2022, Cameran Wheatley, 17, a senior from Bremen High School in Midlothian, died after collapsing while playing basketball against the Chicago Agricultural High School. The school's principal remembered him as a hardworking, "great young man" and "a great role model in every sense."

What to look out for -- and what to do

"I think in situations where (hypertrophic cardiomyopathy) has been identified in the past, with some younger athletes who had suffered a cardiac arrest, there has been some discussion retroactively that that individual may have been experiencing chest pain or shortness of breath or lightheadedness with activity," Swearingen said. "And I think if at any time somebody is having those with regular physical activity, that warrants being evaluated by a cardiologist in order to prevent a cardiac arrest from happening."

"But also, patients are all of a sudden very dizzy and lightheaded and need to sit down," Smith said. "So if somebody who is otherwise very healthy is looking clammy, is looking very fatigued, has shortness of breath or chest pain, and specifically if they pass out or have a syncopal episode, that's likely indication that they're having a cardiac arrest."

Ali's medical examiner report said he reported feeling hot before going to stand in front of a fan and collapsing.

"Witnesses called 911 and (were) told to perform CPR, however, upon arrival of Chicago Fire Department Ambulance #55, the paramedics did not see anyone performing CPR," the report read.

Yancy said that the response time when someone suffers from cardiac arrest is crucial.

"I think what rises to the top of every conversation was the response, the benefit of cardiopulmonary resuscitation -- of CPR -- clearly it was of value, immensely so," in the case of the Bills' Hamlin, he said.

From a parental standpoint, as they worry about their kids playing high school or college sports, Swearingen said, they can make sure there is an action plan in place in case someone collapses.

"Really just the best way to protect kids playing sports is to have well-trained individuals, to have a good emergency action plan," he said. "And that it's not just the coaches and trainers, it's the players that should be trained in this as well, because a lot of times they're closest to the individual who collapsed."

Performing CPR, calling 911 and using an automated external defibrillator, or AED, in a timely manner can be the key to saving a life, Yancy said.

"Every citizen has the opportunity to save a life by becoming adept and understanding how best to deploy CPR," he said. "You can learn this today. If what you saw last night gives you anxiety of fear, you can learn CPR today." 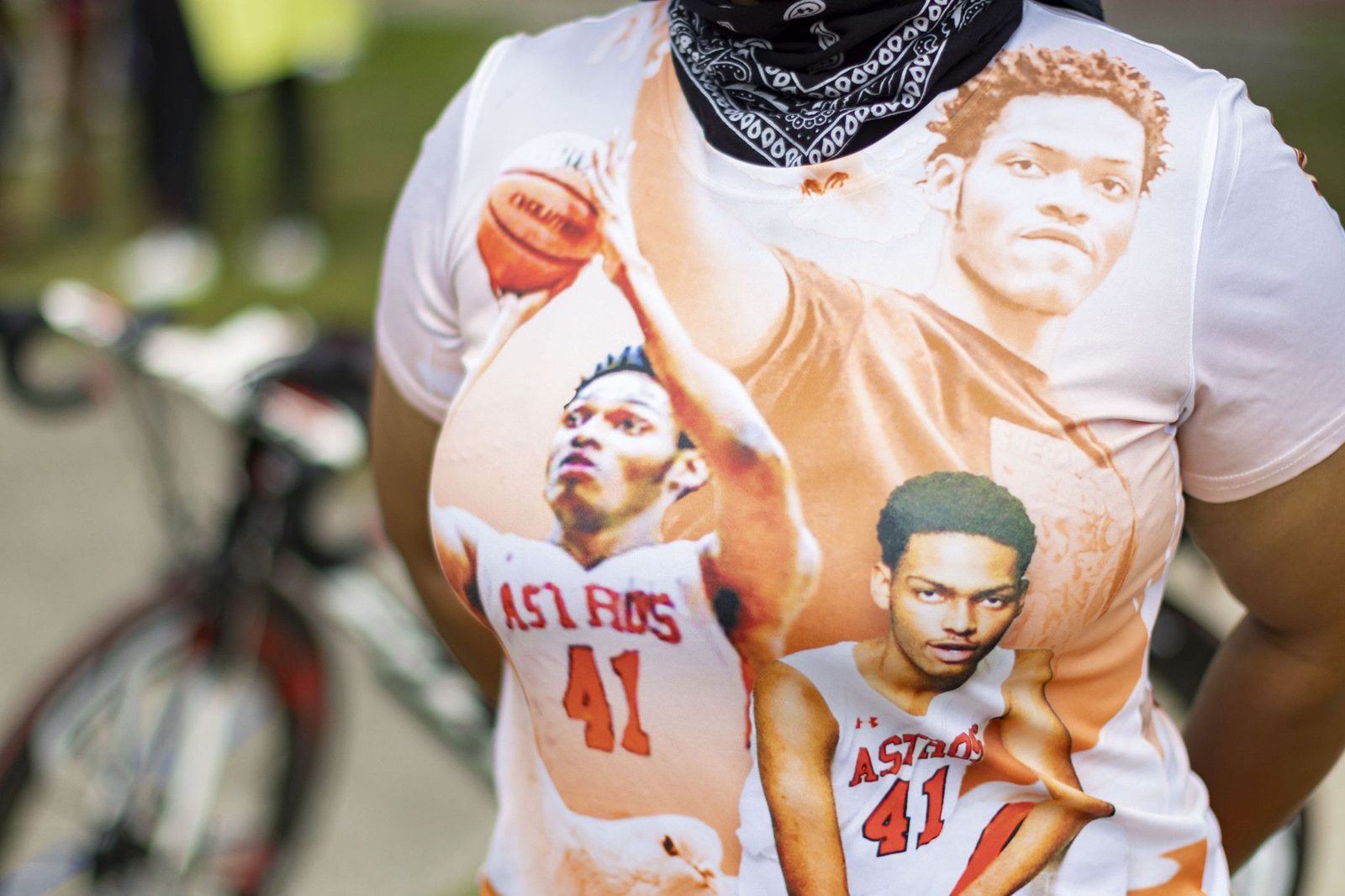 Friends and family wear shirts with photos of Te'Jaan Ali on Aug. 14, 2022, at Ellis Park in Bronzeville. (Brian Cassella/Chicago Tribune/TNS) 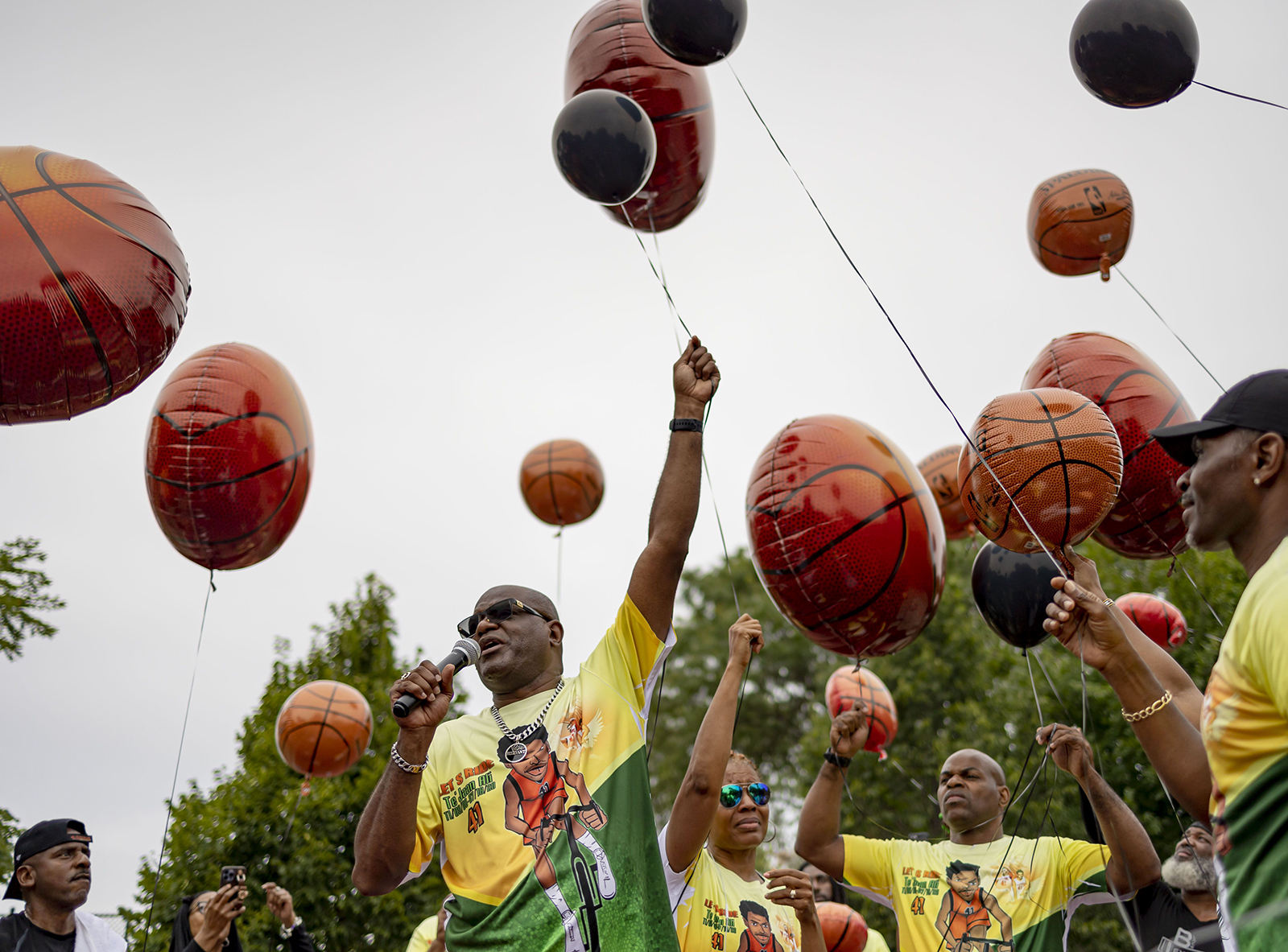 David Ali speaks during a balloon release in honor of his son, Te'Jaan Ali, on Aug. 14, 2022, in Bronzeville. (Brian Cassella/Chicago Tribune/TNS)