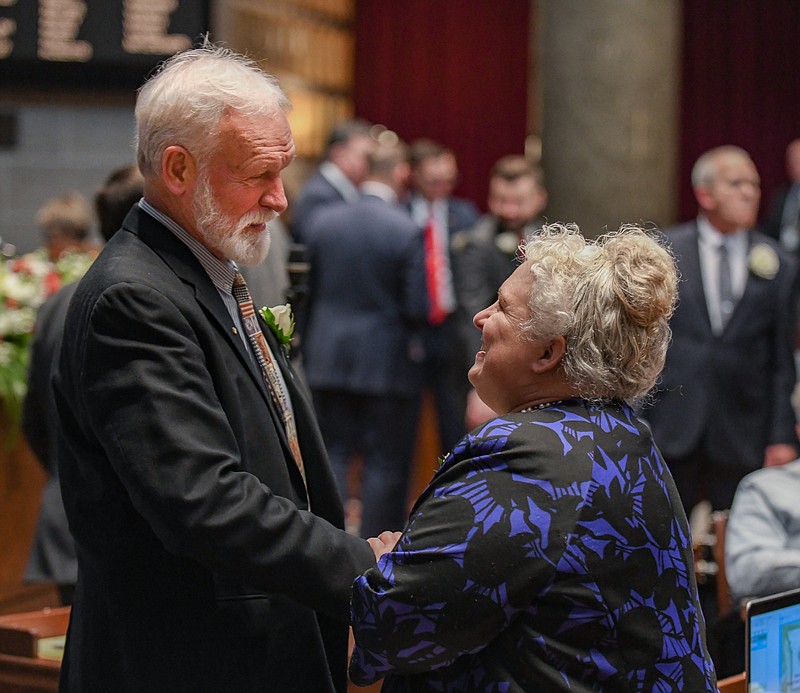 Julie Smith/News Tribune photo: Before the start of opening session Wednesday, Jan. 4, 2023, legislators greeted each other as Rep. Jim Schulte and Renee Reuter, both freshman representatives in the Missouri House, are shown doing here. Schulte represents the 49th District in Callaway County while Reuter represents the 112th District which takes in Jefferson County.

Missouri legislators celebrated new additions to their ranks and offered a glimpse into legislative priorities as the first day of the 2023 legislative session got under way.

The 102nd General Assembly gaveled in around noon Wednesday at the Capitol. New lawmakers voted into office in November were sworn in and leadership in both the House and Senate laid out expectations for the session.

Mid-Missouri lawmakers said the first day, while mostly ceremonial, sets the tone for the year. Members of the House of Representatives officially selected the chamber's leadership, including Rep. Dean Plocher, R-St. Louis, as the speaker, and Rep. Mike Henderson, R-Desloge, as the speaker pro tempore.

Rep. Willard Haley, a Republican who was elected to his second term representing Miller and Moniteau counties in the House, said he was looking forward to the opportunity to collaborate with his fellow lawmakers.

"I'm actually very optimistic about this session. We have some fantastic leadership, and I think we're going to work well together across both sides of the aisle," Haley said. "I have several personal goals, but it's great to see that we have some overall House goals as well. I'm feeling very good about this year."

Haley pointed to personal legislative priorities, like naming a portion of Highway 50 after James Shipley, a Tuskegee airman who called Moniteau County home, and changes to land survey regulations.

New Rep. Jim Schulte, a fellow Republican elected to represent the Callaway County area, was sworn in for his first session as a lawmaker Wednesday. He said much of his first year in office would be spent learning the ropes of the legislative process.

"It's an interesting day, and I'm looking forward to getting started and getting some business taken care of," he said. "We'll get to know in the next week or two what committees we're assigned to, and I'm taking the time to listen and learn. I'm not going to be presumptuous and say I'm pushing for anything big right off of the bat."

From a political standpoint, very little is accomplished on the first day of the session, according to Rep. Rudy Veit, R-Wardsville.

"We get sworn in. We begin to get to know each other," Veit said. "And, at least this year, we're starting on a positive note -- that we're going to accomplish something and not sit around and argue."

If you start on a negative note, it can get worse, he said.

The goal Wednesday was to get through the day, and let families enjoy the event and its significance.

A prayer service early Wednesday morning at Concord Baptist Church reminded lawmakers that once they are elected and begin to experience power, they need to be brought back down to earth every now and then, he said.

"These prayer services start you out with who you are, what you are and what to do," Veit said.

Rep. Dave Griffith, R-Jefferson City, spent much of the morning escorting family members around inside the Capitol. He, like other lawmakers who have been in the Legislature for several terms (this is Griffith's third), understands the importance of the event to those around him, he said.

"It's my third swearing-in," Griffith said. "It's a whole lot different now that I am a junior. I kind of know what it is all about."

He said it's really nice to have family come into town and be witnesses to ceremonies.

In the Senate, lawmakers celebrated new members and maintained a united front on the procedural measures typically done on the first day of session.

After prayer, the Pledge of Allegiance and the national anthem, the upper chamber selected temporary officers and introduced members elected in November. Missouri Supreme Court Chief Justice Paul Wilson then administered the oath of office to the 17 newly elected members -- eight of whom are completely new to the chamber.

Sen. Travis Fitzwater, R-Holts Summit, is one of those eight. He said the first day of the session was "pretty cool."

"It feels like a much more relational situation," he said. "The House is very relational also but this is a tighter knit, smaller group, and I think there's more influence in each individual senator so I just have to learn my way around that."

Bernskoetter said love was gushing from the Senate chamber Wednesday but suggested to "come back tomorrow."

With new members sworn in, the Senate adopted temporary rules to operate under and then officially elected its leader, President Pro Tem Caleb Rowden.

Rowden addressed the chamber after taking the oath to lay out expectations and legislative priorities for the majority party.

"The Missouri Senate is an incredible place," he said. "Thirty-four uniquely different individuals representing 34 uniquely different parts of the state. Among the senators sitting in front of me we have educators and attorneys, business owners and farmers and everything in between. Twenty-two men and 12 women. Some with beautiful heads of hair and, as we have seen, some with no hair at all."

He said each lawmaker stands in the Senate for a reason.

"We must do everything in our power to meet this challenge," he said. "That means we care more about the policy than the personality. That means we work toward retiring revenge and not recycling it. And that means we break the cycle of governing by fear and half-truths."

"The weight of 6 million-plus Missourians is on our shoulders," he added. "And my question is, how will we respond?"

Legislation was often stalled in the Senate last year as the chamber was bogged down with filibustering and Republican in-fighting. The chamber got little passed as congressional redistricting became the only topic of consideration for weeks.

After talking with other freshmen senators, Fitzwater said there's a goal to get things done this year. Part of the energy comes from a lack of progress last session, he said, but the mandate given from voters in November is also a driving force.

"I'm cautiously optimistic," he continued. "We just have to get to work."

In accepting the gavel for the House, Plocher pointed out highlights over the past few years -- cutting taxes, strengthening the agriculture industry, ensuring patients had the right to have an advocate at their sides in a hospital and preserving the integrity of elections.

But he also said the state has much work to do. He said Missouri has "experienced unprecedented challenges, such as COVID and a greater, almost suffocating influence from our federal government, threatening the very concept of federalism."

He also said Missouri has to combat violent crime.

"We cannot be bystanders as unchecked crime causes the systematic destruction of our proud state," Plocher said.

Asked later during a news conference to expand on his comments, he said, "Violent crime is violent crime. It's murder. It's rape. It's pillaging, essentially. It's robbery," he said. "It's occurring all over the state. We just witnessed a violent crime in Jefferson City, literally a block away from where I live when I'm visiting down here."

He added his permanent home is in St. Louis -- a city that has been in the news often during the past couple of years because of a crime wave.

"Violent crime has plagued that city," Plocher said. "I think it's demoralizing to our state."

He said lawmakers are pulling the state forward in "very positive ways," but violent crime is the one thing dragging it back.

Bernskoetter said the Senate is reducing the number of committees it has this session. He said he's hoping to stay on the committees he's previously served on, such as those dealing with agriculture and economic development.

"I like the committees I've been on in the past, so we'll find out here shortly what committees I'm on," he said, adding that full committee assignments will likely be announced Monday.

The House must pass rules for the new General Assembly before the lower chamber begins assigning committees, outside of the House Consent and House Procedures Committee which helps set those rules. 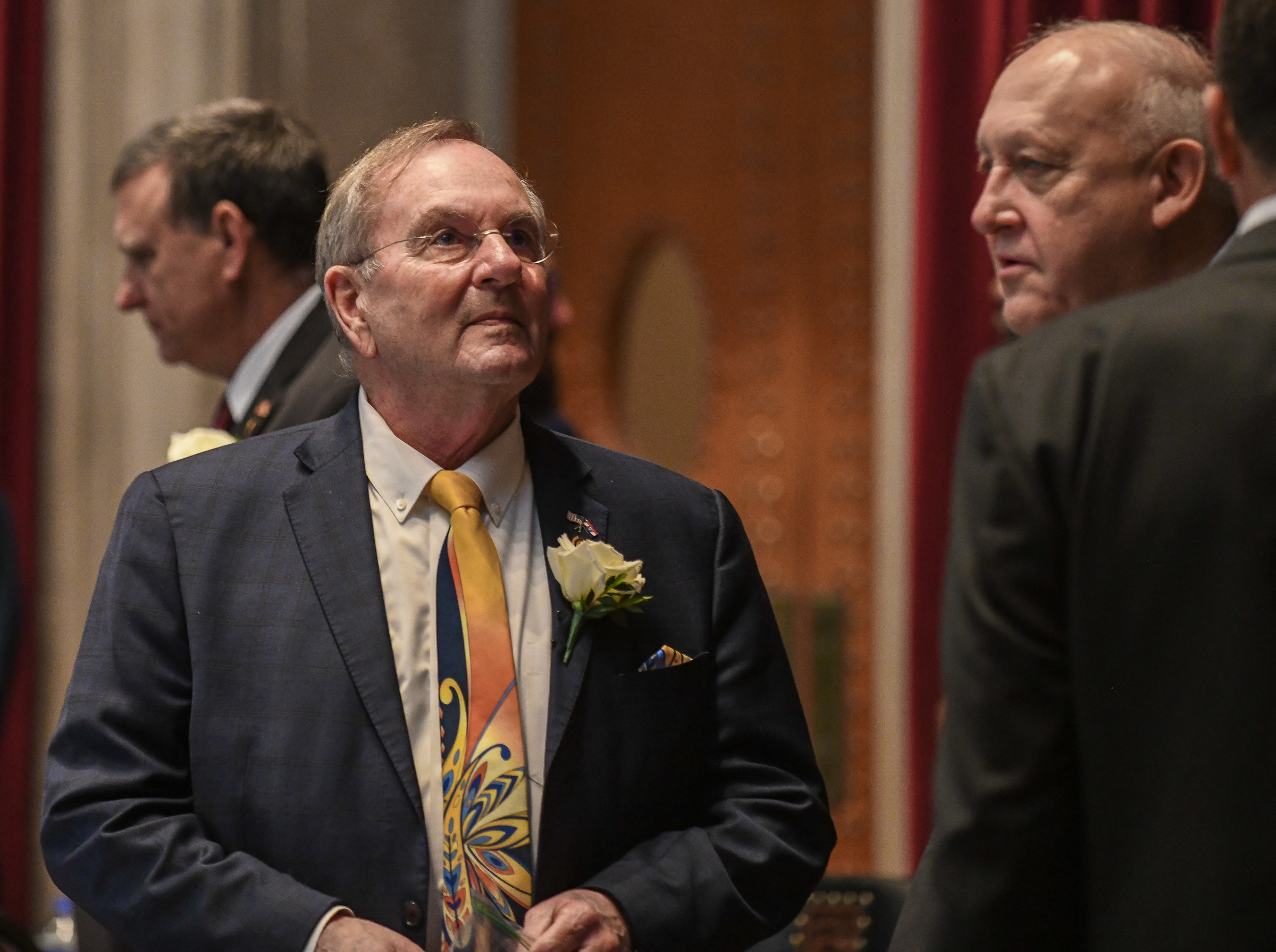 Julie Smith/News Tribune Rep. Dave Griffith, R-Jefferson City, looks to the gallery to respond Wednesday prior to the official start of the day's legislative activities in the Missouri House of Representatives. 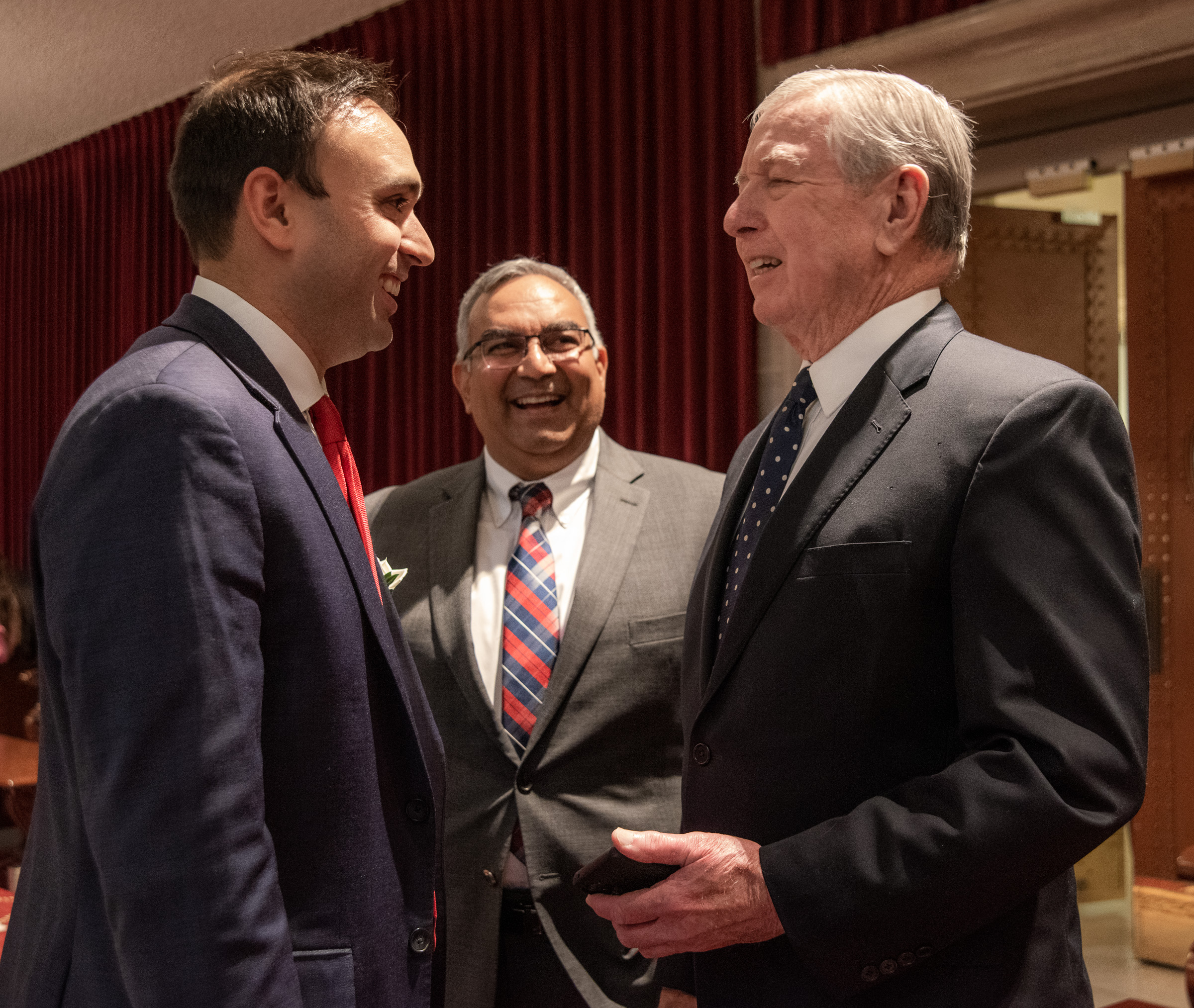 Julie Smith/News Tribune Former Missouri Governor John Ashcroft, at right, visits with freshman representative, Ben Keathley, at left, just prior to the bell to ring in the start of a new legislative session. Keathley was a student at Knox College in Illinois when he invited Ashcroft to speak at the liberal arts college. Ashcroft was a two-term governor from 1984 to 1993 and later elected to the U.S. Senate. He was selected in 2001 to be United States Attorney General under President George W. Bush, a role he served in until 2004. Looking on in the background is Vivek Malek, who in December was named Missouri Treasurer. 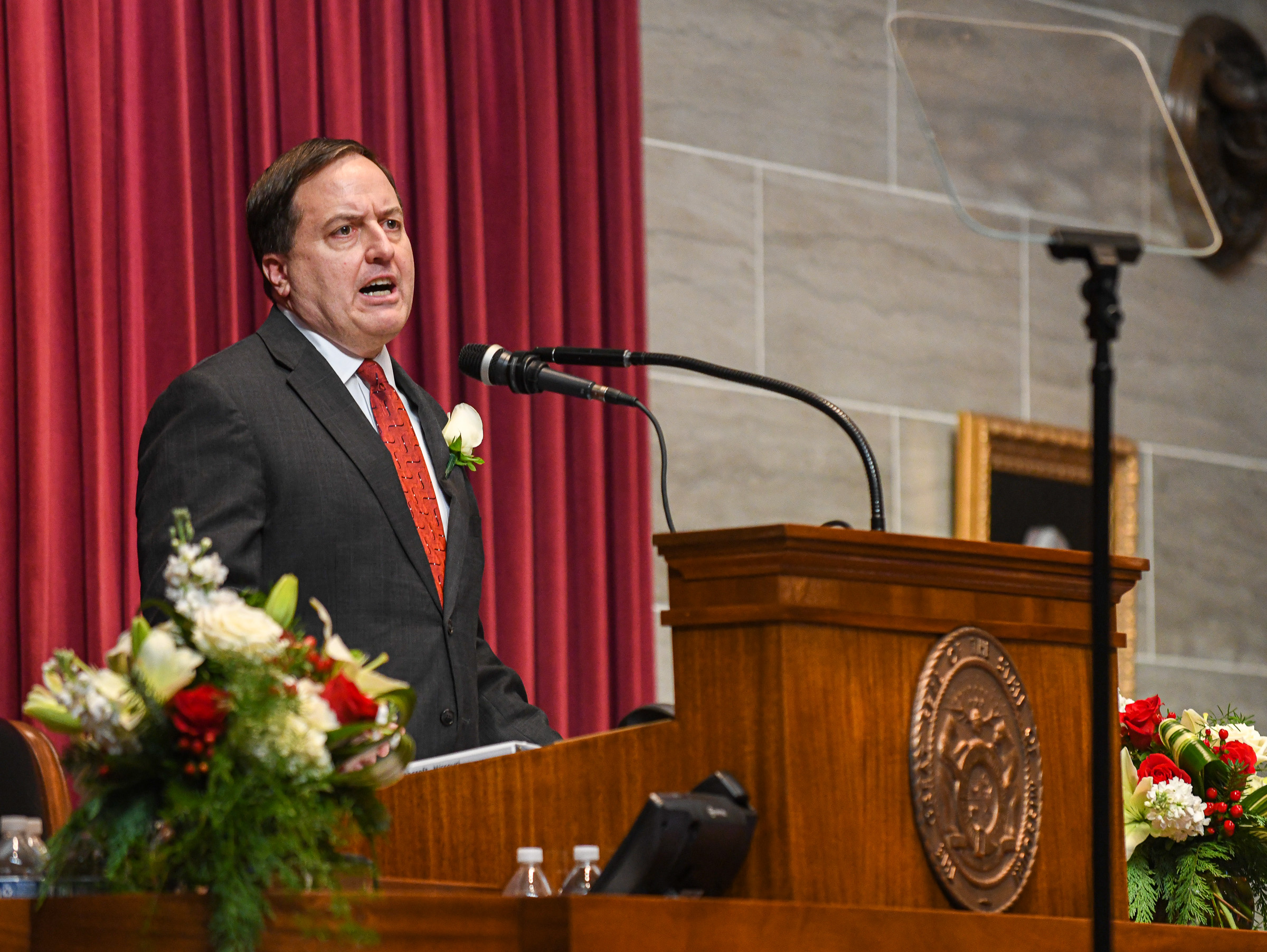 Julie Smith/News Tribune photo: Missouri Secretary of State Jay Ashcroft opened the start of the 102nd General Assembly with a speech thanking legislators for their work over the previous two years on issues and oversaw the election of a temporary speaker to hear nominations for Speaker of the House. 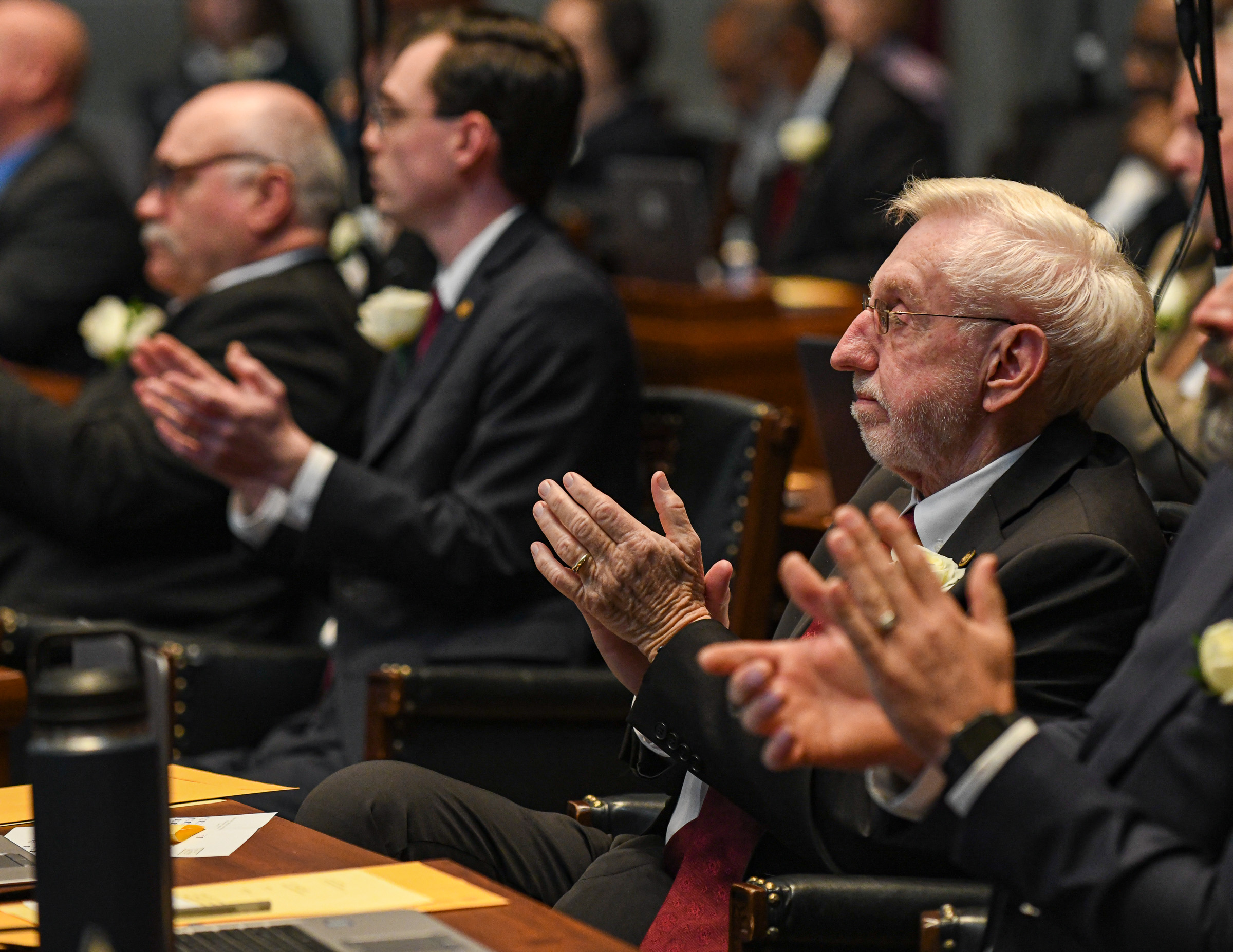 Julie Smith/News Tribune. Rep. Rudy Veit, R-Wardsville, near, is shown during Wednesday's opening session of the MIssour House of Representatives. 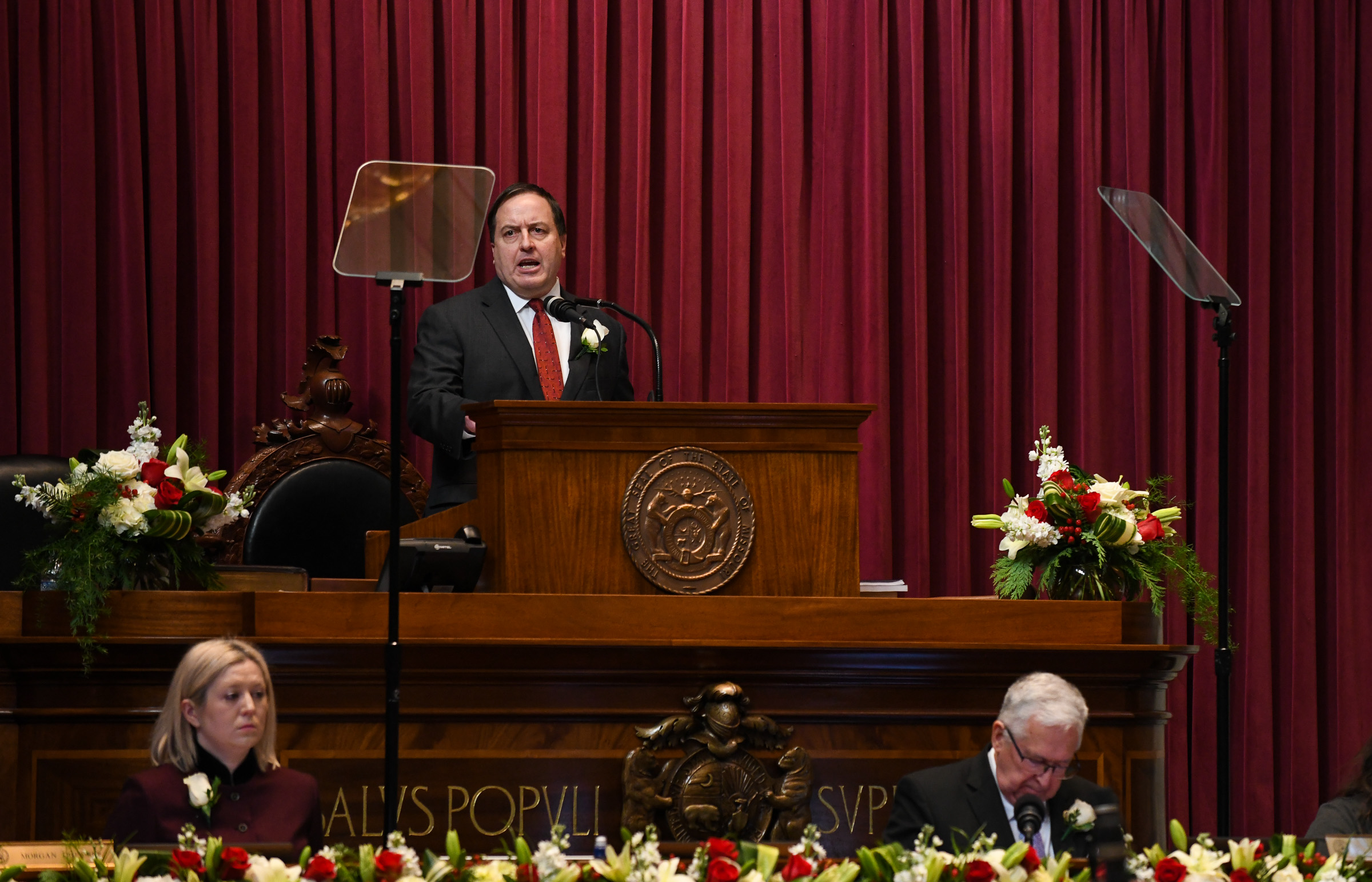 Julie Smith/News Tribune. Missouri Secretary of State Jay Ashcroft opened the start of the 102nd General Assembly with a speech thanking legislators for their work over the previous two years on issues and oversaw the election of a temporary speaker to hear nominations for Speaker of the House. 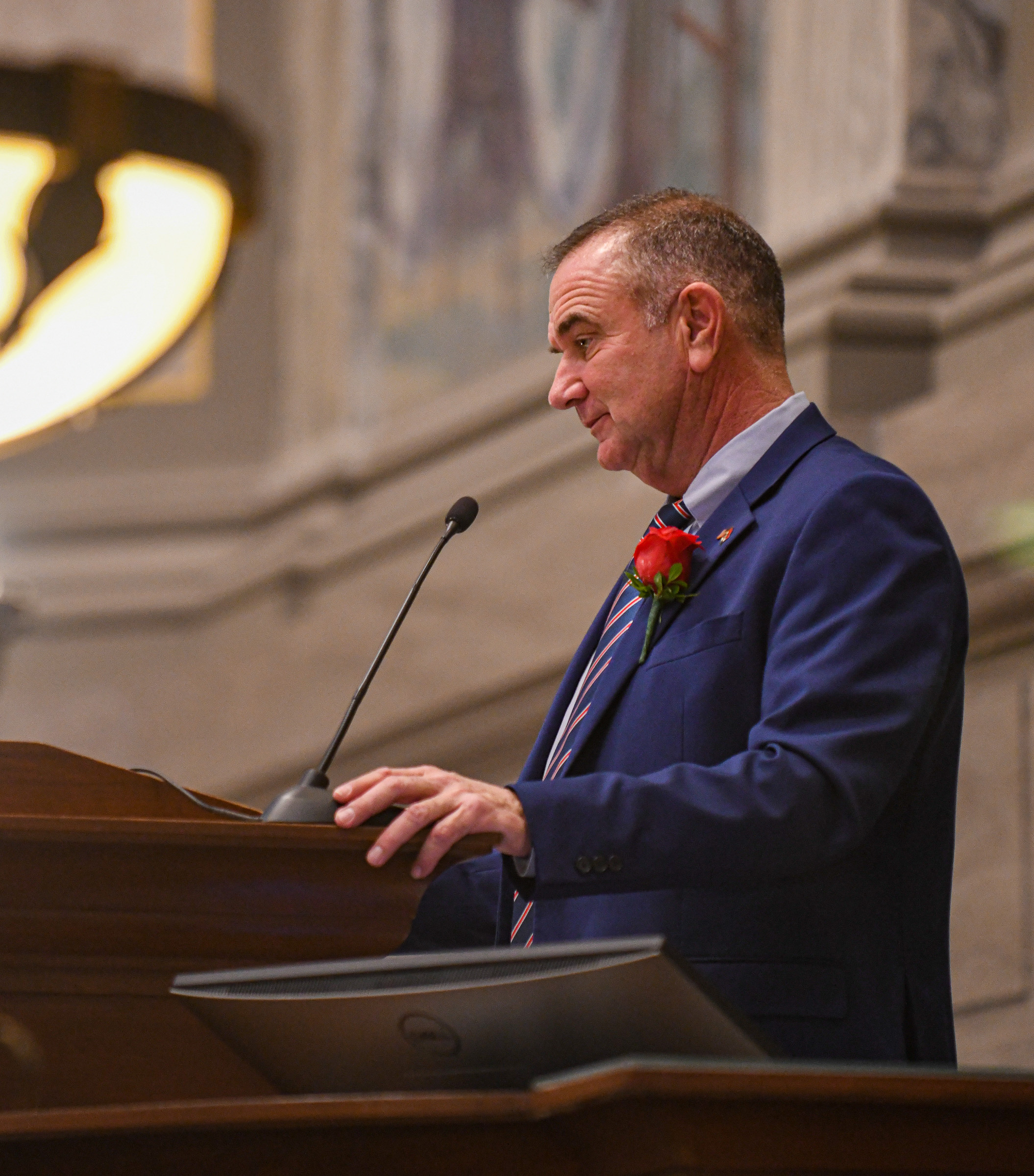 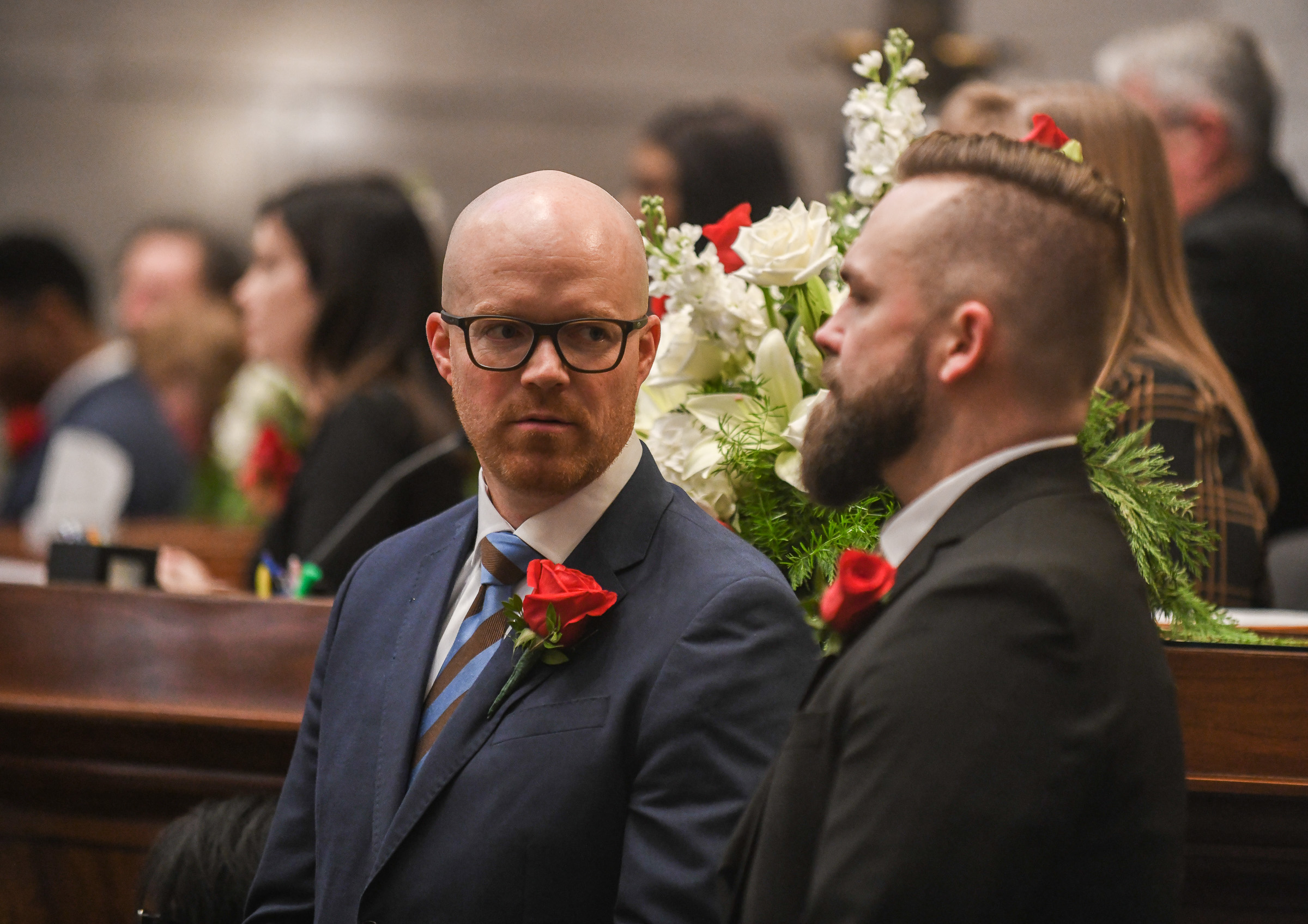 Julie Smith/News Tribune. Sen. Travis Fitzwater, left, turns to Sen. Nick Schroer, both freshman Republicans who were to be sworn in Wednesday during opening ceremonies in the Missouri Senate. 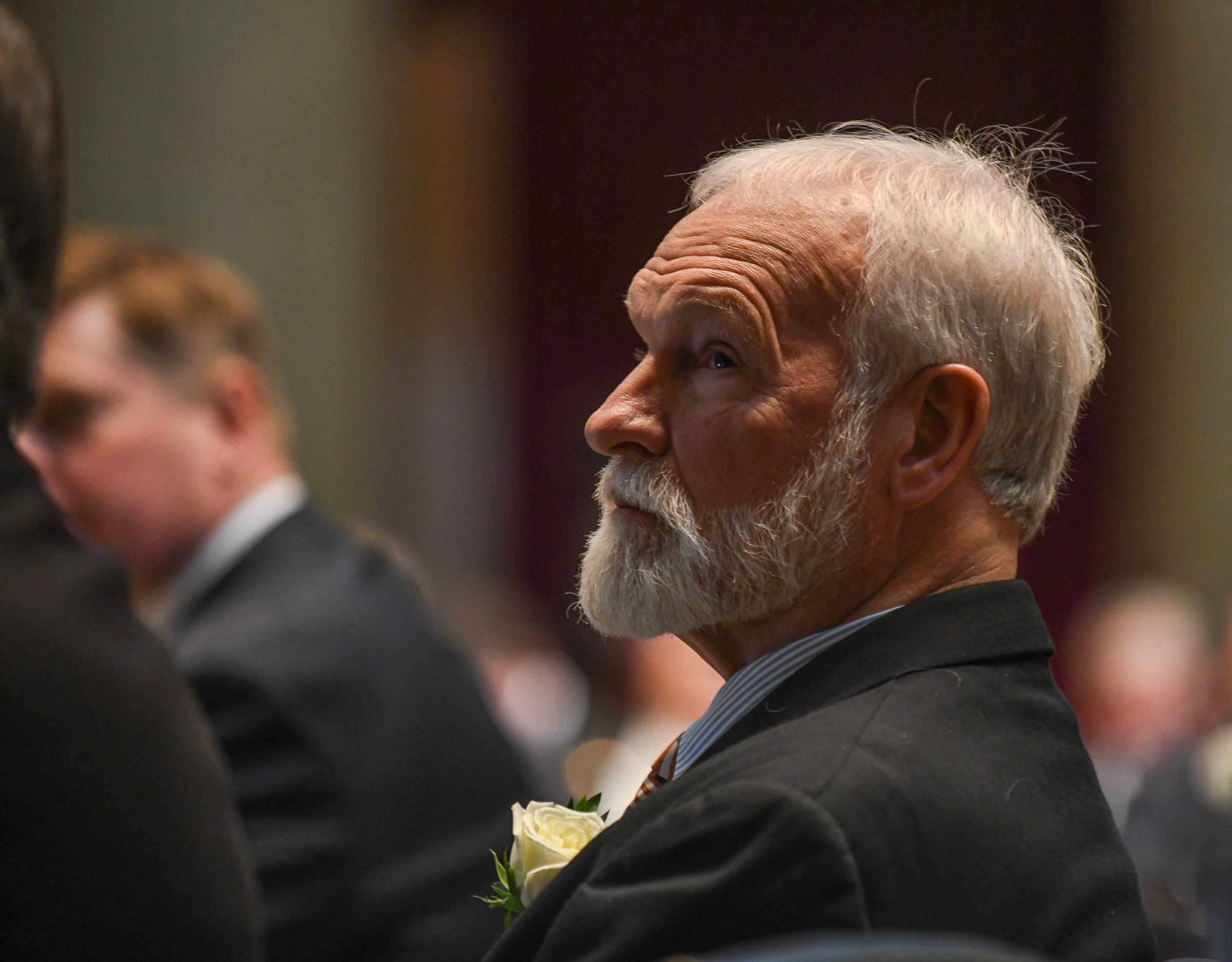 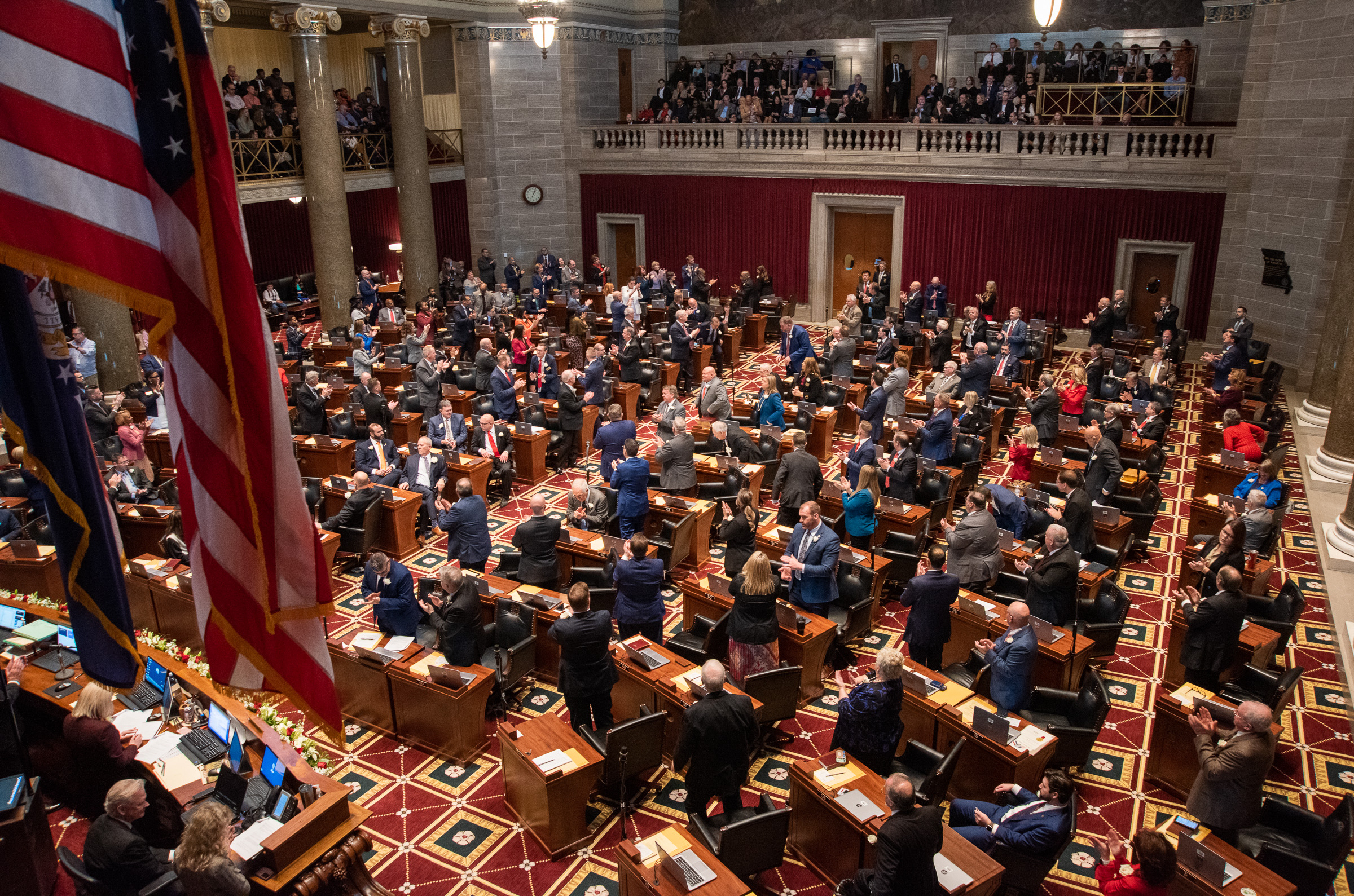 Julie Smith/News Tribune Members of the House of Representatives stand to applaud during the opening session of the second session of the 102 General Assembly. 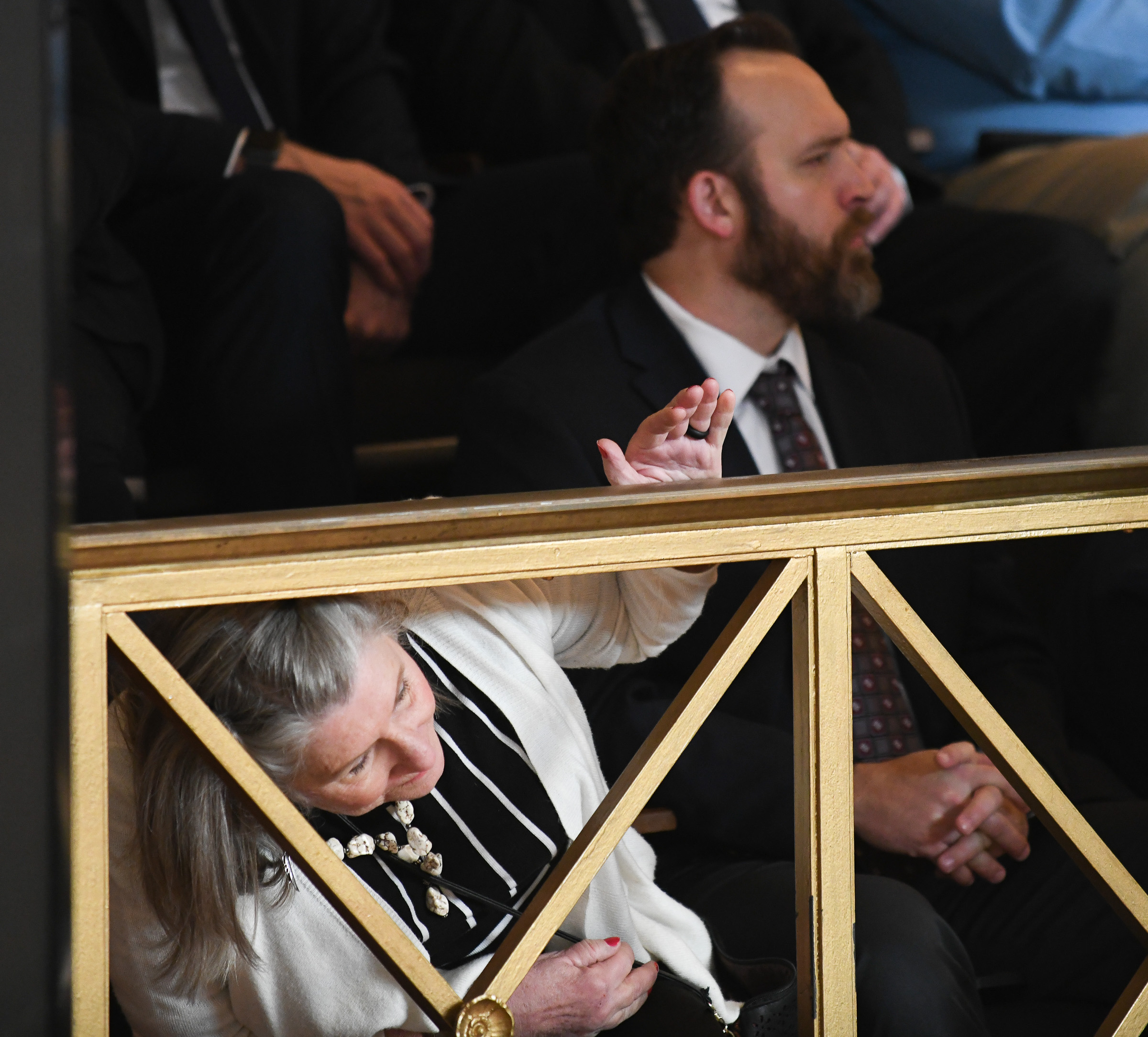 Julie Smith/News Tribune. Janelle Schulte ducks her head between through the railing to be able to gain a better view of the activities going on of the floor of the Missouri House of Representatives. Schulte is the wife of freshman representative, Jim Schulte, who was to be sworn in during opening festivities of the 102nd General Assembly. Seated next to her is Greg Schulte. 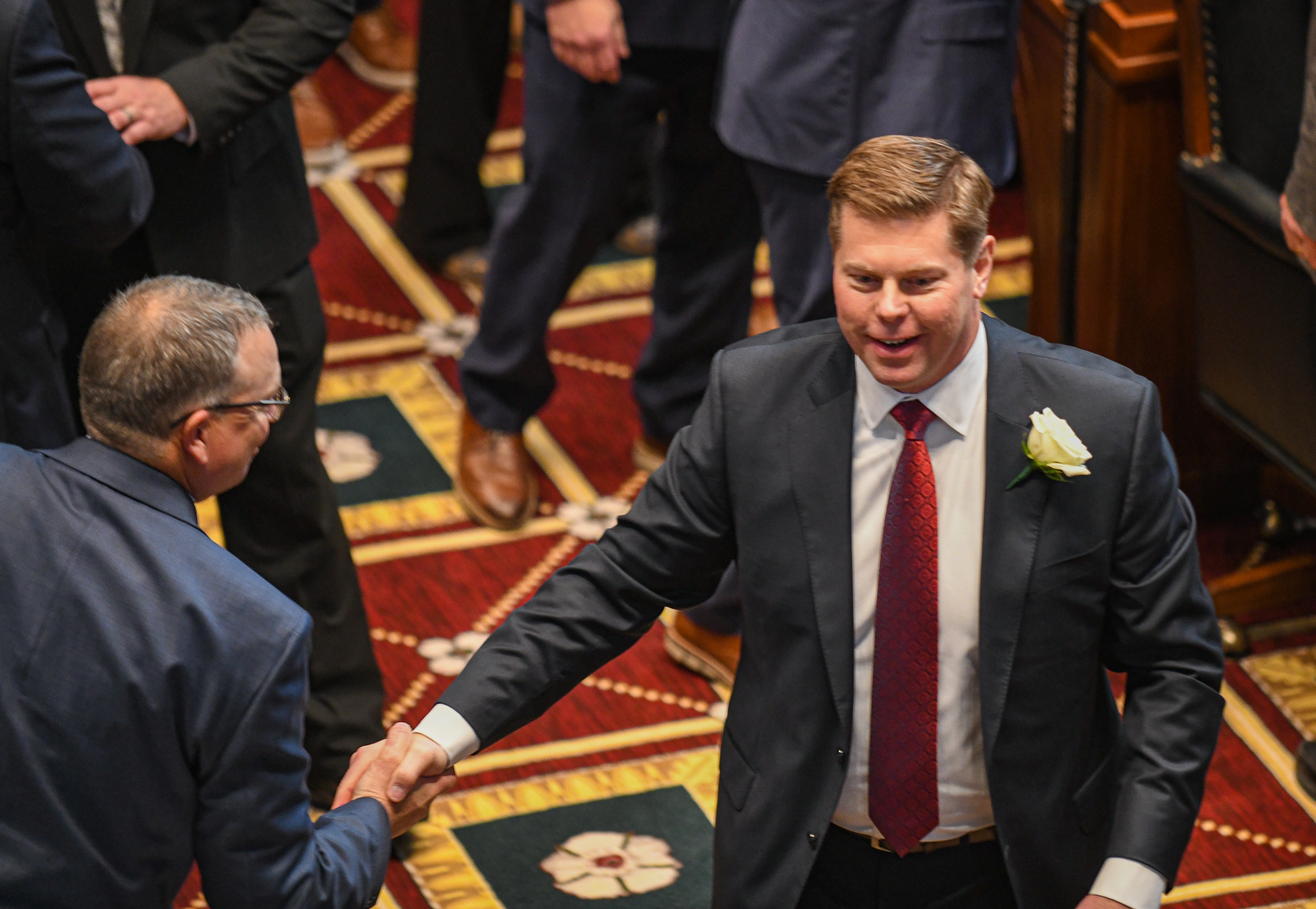 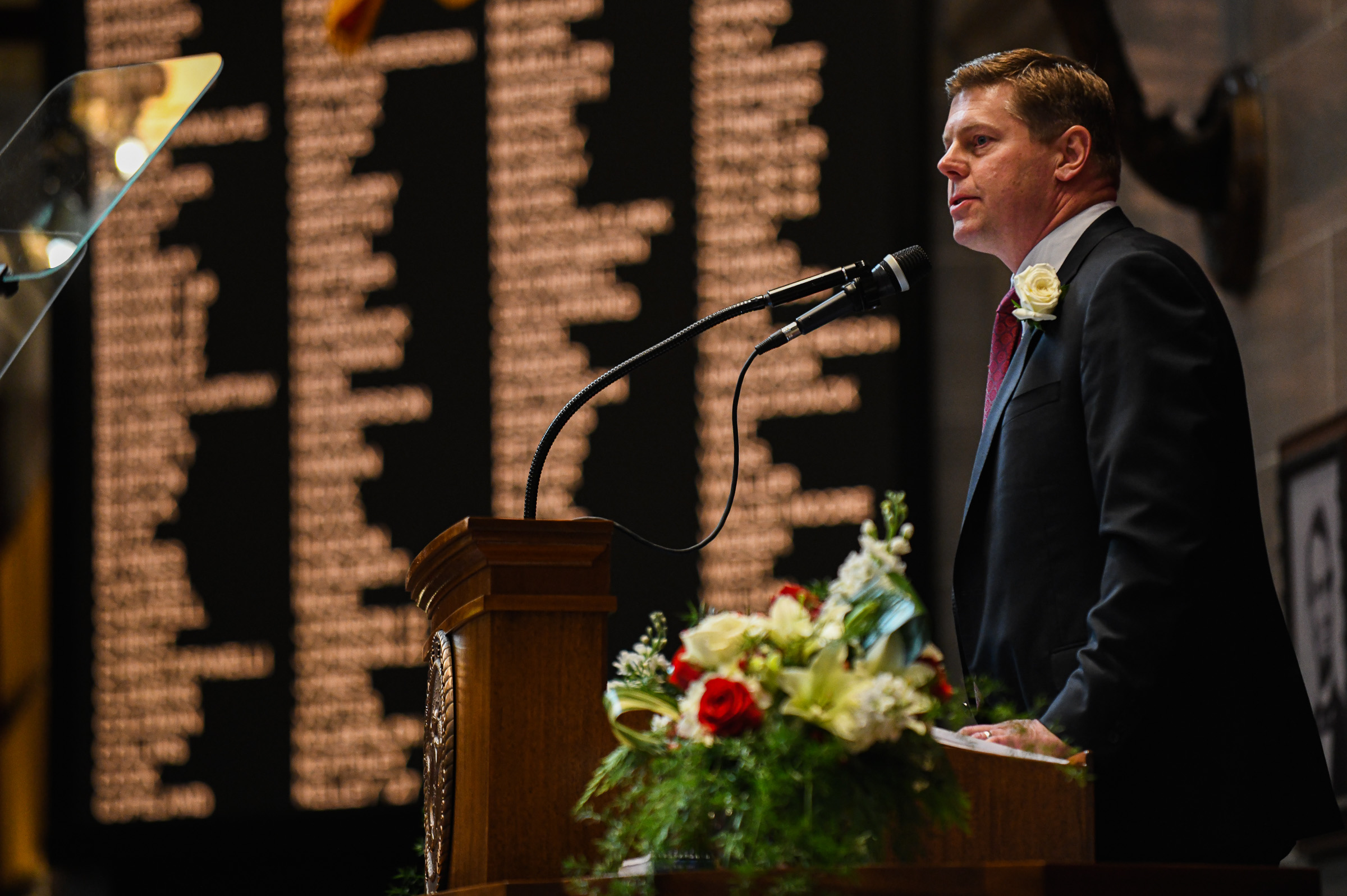 Julie Smith/News Tribune Dean Plocher delivers a speech Wednesday immediately after being sworn in as Speaker of the House during opening day activities of the second session of the 102nd General Assembly. Plocher, a Republican from St. Louis, was elected to the role by members of the Missouri House of Representatives during the opening session. 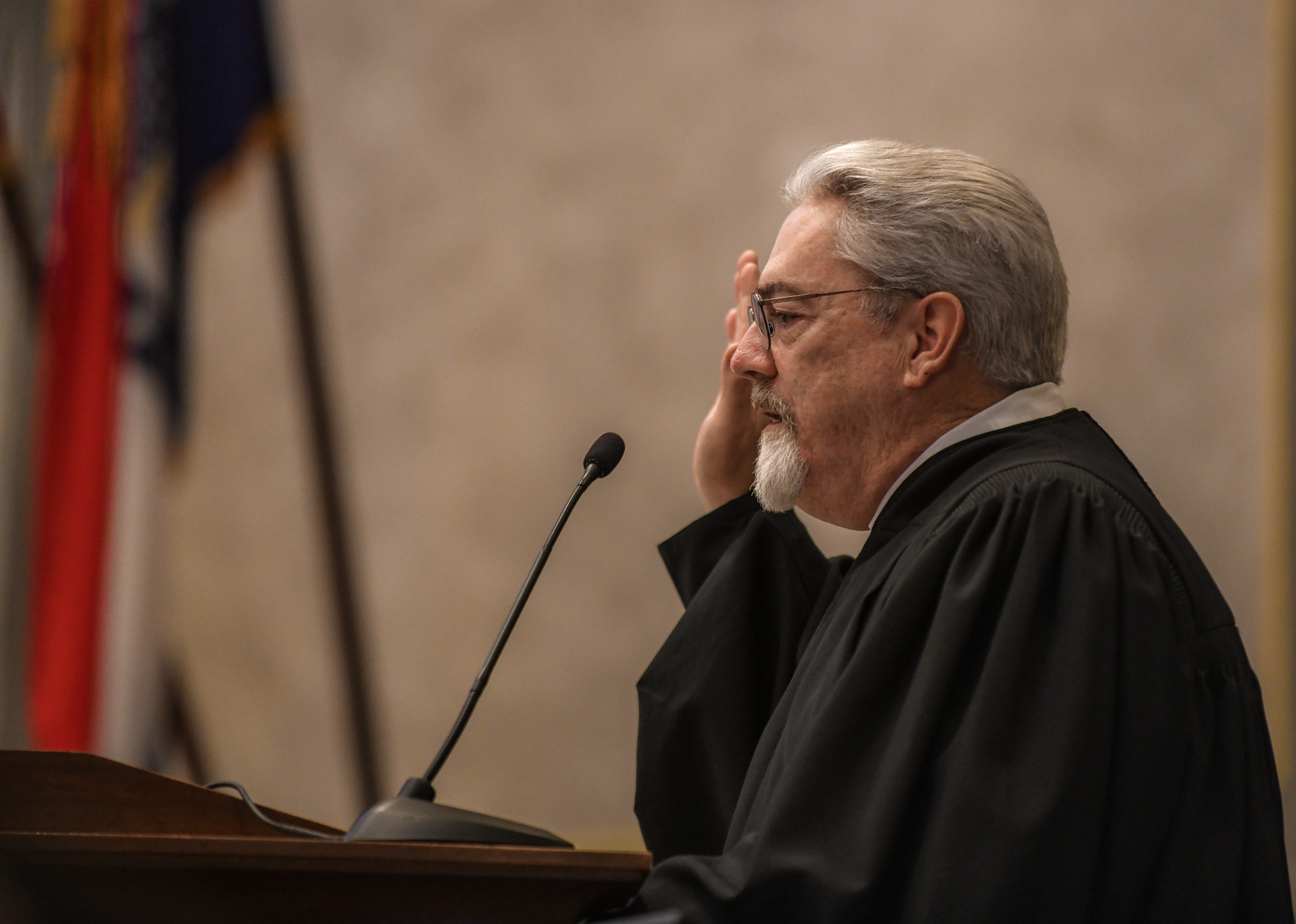 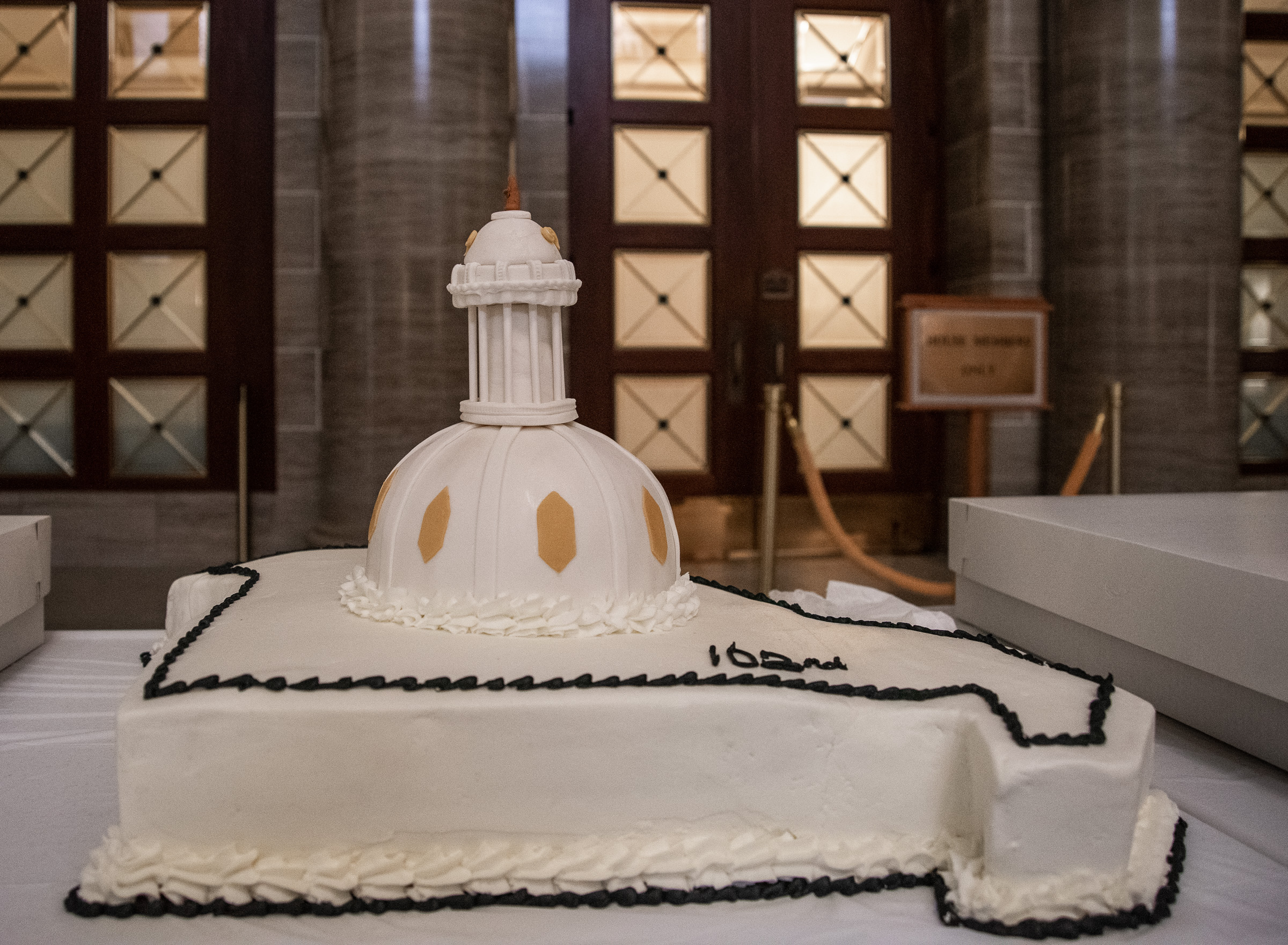 Julie Smith/News Tribune Upon the conclusion of formal proceedings of the opening day of the second session of the 102 General Assembly of the Missouri House of Representatives and the senate, a reception followed which featured this cake in the shape of Missouri with a Capitol Dome. The cake was made by Joan Fairfax and staff from the Chez Monet in the Capitol cafeteria.