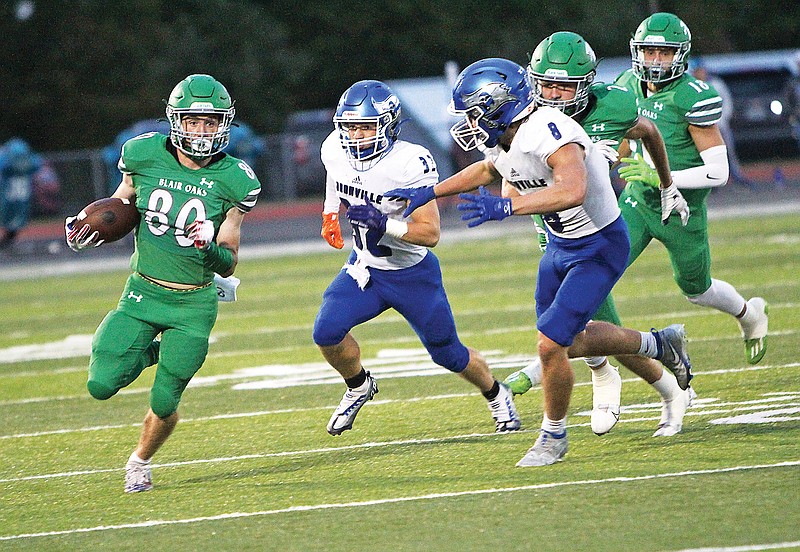 WARDSVILLE -- Tonight’s meeting between the Blair Oaks Falcons and the Versailles Tigers is a case of two teams going in different directions.

Blair Oaks is looking to continue an undefeated start to the season, while Versailles is seeking to end a 14-game losing skid that dates back to Week 2 of last season.

“You know they’re going to bring their best game,” Blair Oaks coach Ted LePage said ahead of tonight’s Homecoming game at the Falcon Athletic Complex. Kickoff is at 7 p.m.

One of the early season strengths for the Falcons is their ability to produce big plays. In five games, Blair Oaks has already had 39 plays that have gone for 25 or more yards.

“Big plays happen because you do the little plays right,” LePage said.

LePage set a goal for his offense to get 4 yards per play, as a way to consistently move the chains for a first down. This season, Blair Oaks is averaging an astounding 11.5 yards per play.

“A big play can distort those actual statistics,” LePage said. “We feel like we’re being efficient, but we’re not where we need to be yet.”

Versailles (0-5) has struggled on the offensive side on the football, averaging just 9.0 points per game.

Using a split-back veer option, the Tigers are averaging 105.4 yards rushing and 92.6 yards passing per game.

“What has really impressed me is their ability to run the option,” LePage said. “It’s one thing to line up in that and say you can do it. Their quarterback is also a starting linebacker, so he has the mentality to run the football through you.”

Tyrus Ollison has started the past two games at quarterback for Versailles. He is the team’s second-leading rusher with 154 yards and a touchdown.

Southern Boone took advantage of three interceptions in last week’s 49-7 win against Versailles, returning two of those picks for touchdowns.

“He’ll get better at it each week,” LePage said. “There’s a trajectory difference to being under center and being out of the shotgun when you throw the ball. Being under center, you have some angle advantages, because everything happens faster. But you also have to know the trajectory of the football.”

Tye Edgar scored the Tigers’ lone touchdown last Friday on a run of 73 yards to tie the game at 7. Edgar has a team-high 245 yards rushing, with 141 yards coming last week against the Eagles.

“We played Southern Boone in the Jamboree, and we thought they were fast,” LePage said. “He hit the inside veer and he was gone. There wasn’t anybody tracking him down.”

Cage Pritchett is Versailles’ leading receiver with 199 yards and a touchdown, while Xavier Jones-Nolan is next with 129 yards receiving. All-conference receiver Reese Murdock has been out with an injury.

LePage said the Falcons have to be “exact in their alignment on their assignments” against the Tigers’ triple-option.

“They’re big up front,” LePage said. “When you’re big up front, those guys like to put their hands down and go forward. They’re very good at making that initial contact and then driving their feet.”

“As the season has worn on, we’re seeing the ball has to go toward the sidelines instead of straight down the field,” LePage said.

Tyler Morrison and Trace Murdock start on both the offensive line and at defensive end for the Tigers, who utilize a mix of 3-3-5 and 3-5-3 defensive formations. Joe Bland lines up between the two at nose guard.

“This team doesn’t lack physicality,” LePage said. “There have been some things that haven’t gone their way, but their physicality has been impressive.”

At safety, Pritchett has 21 tackles and the defense’s lone interception.

The Falcons have seen this type of defense before.

“One thing we really illustrated to our players is this is what Mexico played last year, this is a defense that can cause you fits,” LePage said. “You’ve got to block your areas and not men.”

Versailles has recovered seven fumbles this season, including three in an 18-6 loss two weeks ago to Hallsville. Six players have at least one fumble recovery for the Tigers.

“They seem to be really attacking the football,” LePage said. “They’re good tacklers. Against Hallsville, they’d move the football and then turn it over.”

This is the second straight week Blair Oaks is ranked No. 1 in Class 2 in the Missouri Media Rankings. Rather than worrying about the top ranking creating a target on the Falcons’ back, the coaching staff has used it as a motivational tool instead.

“We’ve used it as a tool, saying, ‘If everybody thinks that about you, then we have to practice that way every day,’” LePage said. “This week, our practices have been very crisp. We’re raising our level.

“You’re on a very slippery slope when you’re No. 1. If you’re No. 1, you’d better be sharp and you can’t take any days off. You can’t play like the No. 1 team on Friday if you can’t practice like it on Monday, Tuesday, Wednesday and Thursday.”

Notes: Blair Oaks is playing at home for the fourth time in six weeks. The Falcons are 104-11 all-time at the Falcon Athletic Complex since the facility opened in 2006. They have not lost multiple home games in a single season since it opened. … Blair Oaks holds a 32-14 record in the all-time series against Versailles, winning the past 19 matchups. The Tigers last won in the series in 2002 by a score of 28-20. … Jake Hagner suffered a season-ending knee injury in last Friday’s game against Boonville. Zack Prenger, who has returned from an early season injury, will start in Hagner’s place at cornerback tonight. … Holden Brand led the Falcon defense with eight tackles against the Pirates. Alec Wieberg had an interception, as Blair Oaks has recorded at least one interception in every game this season.