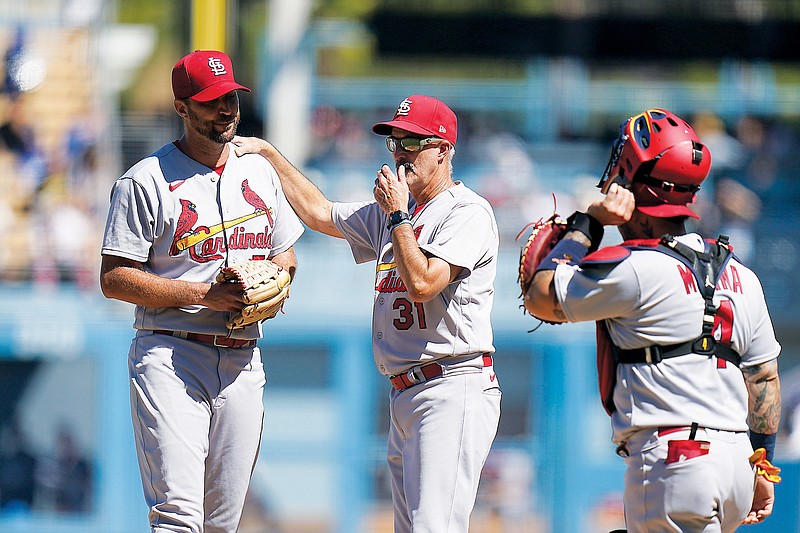 LOS ANGELES -- Will Smith had two hits and Michael Grove pitched five solid innings to pick up his first career victory as the Los Angeles Dodgers clinched the No. 1 overall seed in the National League with 4-1 win Sunday against the St. Louis Cardinals.

Two days after reaching 700 home runs, Cardinals slugger Albert Pujols received a standing ovation when he was announced as a pinch-hitter in the ninth inning and struck out.

Grove (1-0), making his sixth appearance and fifth start, gave up one run and three hits to help the Dodgers tie a club record with their 106th win -- previously accomplished in 2019 and 2021.

“It speaks to the level of consistency and excellence,” manager Dave Roberts said. “We’ve put ourselves in a really good spot. Part of getting where we want to get to, you’ve got to dominate and play well throughout the regular season. We’ve been as consistent as anyone.”

Andre Jackson pitched the final three innings for his first save, with left fielder Joey Gallo making a diving catch of a ball hit by Dylan Carlson to end the game.

“To be honest, I didn’t even know that,” Grove said of the Dodgers being able to clinch the top seed in the N.L. “I try to go out there and look at what the lineup is and how I’m going to get guys out. If I had known that, maybe there’s a little more pressure.”

Roberts was pleased with Grove’ effort, noting the rookie right-hander was sick in the days leading up to his scheduled start.

“Can’t say enough about Michael,” Roberts said. “He was under the weather. He was determined to make this start. After the fifth inning I felt he gave us everything he had. I really tip my cap to him.”

The Dodgers’ Freddie Freeman doubled in the first inning, giving him 191 hits and tying his career-high set in 2018 with Atlanta.

Freeman’s milestone double was his 46th of the season. He needs three more to tie the franchise single-season record of 49 set by Shawn Green in 2003.

Los Angeles scored twice in the first. After Freeman’s run-scoring hit, Adam Wainwright walked Gallo with the bases load to make it 2-0.

“I just can’t give up,” Wainwright said of his recent struggles. “I’ve just got to keep pitching. This team needs me to pitch well. If we’re going to win the World Series, I really need to be a part of it.”

Wainwright’s next start is in one week.

“It’s frustrating,” Wainwright said. “Been working hard. Been trying to do everything I know how to do. Training staff is, too. My body feels good. Stuff just not coming out right. All I know how to do is keep going. Only way I don’t come out of this is if I give up and that’s not going to happen.”

Wainwright and Molina made their 327th career start as batterymates, extending their MLB record.

Notes: The Dodgers have homefield through the NLCS at Dodger Stadium. “It’s the only stadium with four decks, 50,000 people and they are loud,” Freeman said. “Loudest stadium I’ve ever heard was this place in 2013 when Juan Uribe hit that home run against (the Braves in NLDS Game 4). This place can be deafening. To have homefield through the NLCS is a big deal.” … Dodgers RHP Yency Almonte (right elbow tightness) faced four batters Sunday for Triple-A Oklahoma City. Roberts said he’s scheduled to join the team Tuesday in San Diego and could be activated Wednesday. … Cardinals RHP Miles Mikolas (11-13, 3.35 ERA) looks to snap a three-start losing streak as he faces Milwaukee RHP Adrian Houser (6-9, 4.62 ERA) in the series opener Tuesday. … Dodgers LHP Tyler Anderson (15-4, 2.52 ERA) starts the series opener Tuesday at San Diego against veteran LHP Blake Snell (8-9, 3.62 ERA).