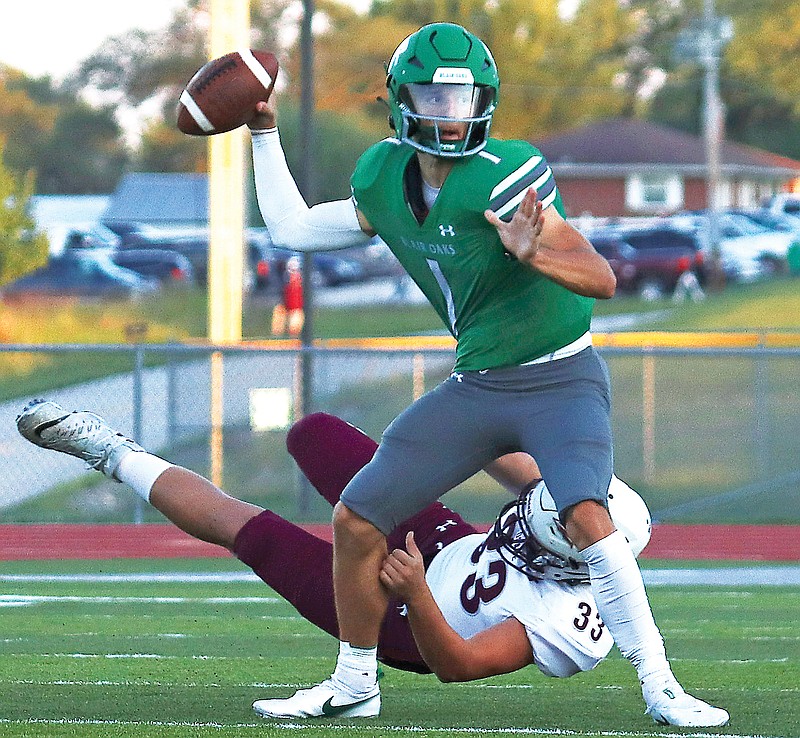 Blair Oaks quarterback Dylan Hair looks to throw a pass as School of the Osage linebacker JP Kordula attempts to tackle him during a game earlier this month at the Falcon Athletic Complex in Wardsville. (Kate Cassady/News Tribune)

WARDSVILLE -- Last week was rivalry week for the Blair Oaks Falcons. This week will feel like a continuation of rivalry week.

First place in the Tri-County Conference will be on the line tonight when the top-ranked Falcons host the Boonville Pirates. Kickoff is at 7 p.m. at the Falcon Athletic Complex.

Last year, Boonville’s 41-35 regular-season victory against Blair Oaks snapped the Falcons’ 44-game conference win streak that spanned all the way back to 2014.

Blair Oaks got its revenge seven weeks later, going back to Boonville and winning 64-38 in the district semifinals.

But the Falcons haven’t forgotten about that loss.

“They made it a rivalry last year when they beat us,” LePage said. “That put a big, huge scar on a lot of our players. That’s been talked about in the winter, it hangs in our weight room, it hangs in our locker room. They are reminded of that every day.”

Blair Oaks (4-0, 2-0 Tri-County) is coming off a 52-14 win last Friday against California, its long-standing rival. LePage said much like last week’s game, the Falcons are already hyped for this week’s game against the Pirates.

Boonville (3-1, 2-0 Tri-County) had a tough strength of schedule to start conference play, but the Pirates won both games by a combined five points. Last Friday, Boonville shut out Southern Boone in the second half to come away with an 18-14 home victory.

“They’ve had some struggles against some teams on defense, and then last week, they shored it up and really held (down) a good Southern Boone team,” LePage said. “They’re a team that’s a little bit on the rise and they feel good about themselves. They’re going to come in here with a little swagger.”

Two weeks ago, Boonville went on the road and won a shootout against Hallsville, prevailing for a 59-58 victory in overtime.

“It was 7-0 at the end of the first quarter,” LePage said. “There was a lot of good defense played in the first quarter. It just seems like when it got hot, both teams relied on their offenses and got in a track meet.”

Boonville’s offense is led by dual-threat senior quarterback Colby Caton. While he has thrown for 723 yards (39-of-53) for six touchdowns and one interceptions, it’s his run-game ability that concerns Blair Oaks.

“Normally a quarterback is your elusive outside runner,” LePage said. “He is their power back.

“Last year, he rushed 57 times against us in two games for 327 yards and five touchdowns. He never seems to go backward, he’s always falling forward and spinning. We told our players you’re going to have to tackle him by the legs and hang on for all you’ve got.”

However, Troost also possesses a dual-threat ability, as he is second on the team behind Caton with 51 carries for 273 yards and seven touchdowns. He has also lined up behind center in the Wildcat and threw a touchdown pass to Caton against Hallsville.

“With his dynamic speed, it can be an iso play up the middle,” LePage said. “He just bounces it to the outside and he’s gone. You never know where he’s going to go.”

Jackson Johns, a senior wide receiver, is Caton’s other target through the air. Johns had 10 catches for 248 yards and two scores.

“He’s fitting into the role that they had for (Jamesian McKee) last year,” LePage said.

“They’re trying to let Caton wear out your middle and then get Troost on the edge, let Johns catch a couple passes on the edge,” LePage said.

The Pirates, who are scoring 33.3 points and allowing 31.3 points per game, have lined up in a 4-3 defense this season.

Senior end Tyson Ellison will be on the left side of Boonville’s defensive line. He had 15 tackles, three for a loss.

“He uses his hands so well,” LePage said. “A lot of high school kids will run into each other, it’s more of a game of pinball. He’s able to steer the offensive player away from where he wants to go, then he’s really good at his transition speed.”

His younger brother, freshman Braylon Ellison, has also been a factor up front for the Pirates’ defense.

“Any time you can control the line of scrimmage, you have a chance in high school football,” LePage said.

Boonville has several two-way players, as Johns leads the team with 16 tackles at defensive back. Caton primarily plays in the defensive secondary but he also has three tackles for loss.

“We’ve seen him play four different defensive positions: outside and inside linebacker and safety and cornerback,” LePage said of Caton. “He also seems to know where everybody is running.”

At linebacker, junior Maddex Douglas is tied for the team lead with 16 tackles, followed by junior Abram Taylor with 15 tackles and junior Eli Stock with 13 tackles.

Notes: Blair Oaks moved up one spot to No. 1 in Class 2 in this week’s Missouri Media Rankings, receiving all 10 first-place votes. Lamar, the previous top-ranked team, lost 36-33 last Friday to Seneca. In this week’s poll, Seneca and Lafayette County are tied at No. 2 in Class 2, while Lamar dropped to No. 4. … Blair Oaks holds a 6-1 record all-time against Boonville. Tonight will be their fifth meeting since the start of the 2020 season. … Blair Oaks quarterback Dylan Hair broke the school’s single-game rushing record last week at California, rushing for 351 yards on 18 carries. The previous school record of 307 yards was set in 2003 by Ryan Green. “Dylan does things normal humans don’t,” LePage said. “But there were some opportunities last week where he was running with the ball and was untouched. … The team wants to see him succeed, and they’re trying everything they can do to help him.” … Hair enters the game with 8,752 career passing yards, just 34 behind the school record held by his older brother, Nolan Hair. … Blair Oaks is scoring 49.3 points and giving up 17.3 points per game. Brady Kerperin led the defense last week against California with 12 total tackles and an interception for the game’s only takeaway. ... The Missouri Sports Hall of Fame announced Wednesday the 1974 Boonville state championship football team will be recognized during its enshrinement ceremony Nov. 20 in Columbia.