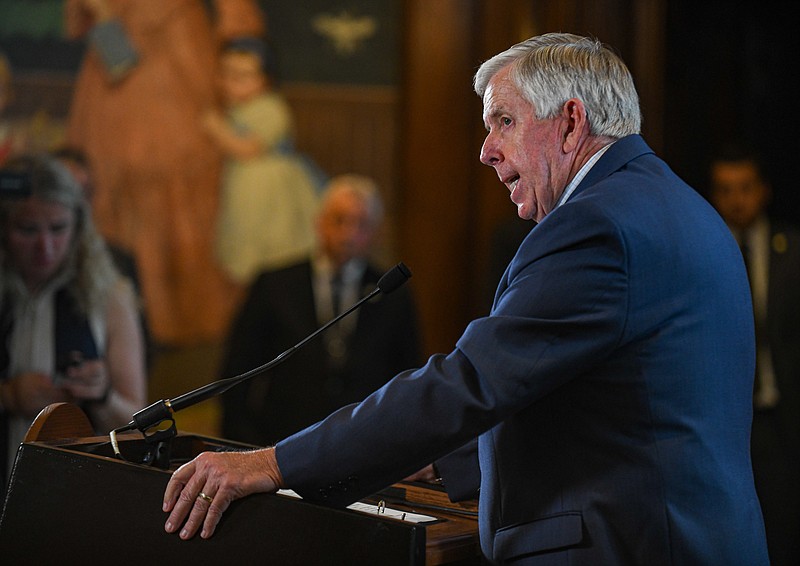 A bipartisan push for Gov. Mike Parson to expand the special legislative session emerged Monday from the Missouri House of Representatives.

As the session's committee work got underway, Republican and Democrat lawmakers said they would be requesting the Republican governor expand the scope of the session to pass an agricultural bill with four provisions the current call wouldn't allow.

"We will be in touch with the governor to expand his call so these four items can be included," said Don Rone, a Portageville Republican and chair of the House Committee on Agriculture Policy.

A spokeswoman for the Governor's Office was not available for comment Monday.

Before amendments were added, Pollitt said the bill came with a $40 million price tag.

"We passed, I believe, five tax credit bills last session all having six year sunsets, except the agricultural tax credit," Pollitt said. "And we have an opportunity to right a wrong here today and this week and into next week."

Pollitt's bill is everything Parson asked for in his call for a special session, which he issued after vetoing an agricultural tax credit bill at the end of last legislative session citing its two year sunsets for the programs.

"Those issues we fully support, but right now the governor needs to expand the call," said Rep. Emily Weber, a Kansas City Democrat and the ranking minority member of the committee. "So I would urge everyone to contact the governor to expand the call so this would fit under the scope of the special session and we can happily pass this on the floor on Wednesday."

Sen. Mike Bernskoetter, R-Jefferson City, has sponsored the anhydrous ammonia legislation for the past two years, and said last week he was unaware of any appetite from the Governor's Office to expand the special session to include it.

Parson has rejected at least two other requests from lawmakers to expand the special session: one from Democrats seeking to address contraception and ectopic pregnancies and another from a bipartisan coalition wanting to take up recreational marijuana before voters decide its fate on the Nov. 8 ballot.

The anhydrous ammonia legislation was part of the original bill Parson vetoed, but not included in the call for a special session. Bernskoetter said he filed an independent bill with language last week to be prepared in the event the scope of the session is expanded.

Rep. Kurtis Gregory, a Marshall Republican with a 1,100-acre family farm, said the amendments tacked on to HB 3 are non-controversial and intended to make operating in the industry more simple.

"I haven't seen any opposition in the House for what we're trying to do," Rone said.

Pollitt said the bill he sponsored during the regular session had bipartisan support, and he looks forward to finding the same support during the special session.

"This pretty much seems like settled policy," said Casey Wasser, COO and senior policy director with Missouri Soybean Association. "Specifically, both chambers overwhelmingly supported these (agriculture) tax credits and have also been very supportive of the substitute that was just announced."

The only testimony in opposition to the bill came from Americans for Prosperity, a libertarian-conservative political advocacy group associated with the Koch brothers. The group held a rally in the Capitol on the first day of the special session.

Jeremy Cady, state director for the group, said Missouri shouldn't be subsidizing a set number of producers, but instead let the free market run its course.

Missouri lawmakers have created more than 60 tax credits since they were authorized in 1973, Cady said, and more aren't necessary. He said the state devotes $600 million to tax credits each year, but only 71 entities have benefited from existing agricultural tax credits.

"We're selecting a very select few individuals to benefit from these at the expense of all Missourians," Cady said.

Most agricultural tax credits produce $2-$7 of return for every $1 invested, Rone responded. He said the state invested $2.3 million last year and saw a $6.3 million return.

Agriculture is considered Missouri's biggest industry as it drives $94 billion in economic activity annually, and one in 10 Missourians are directly involved with it.