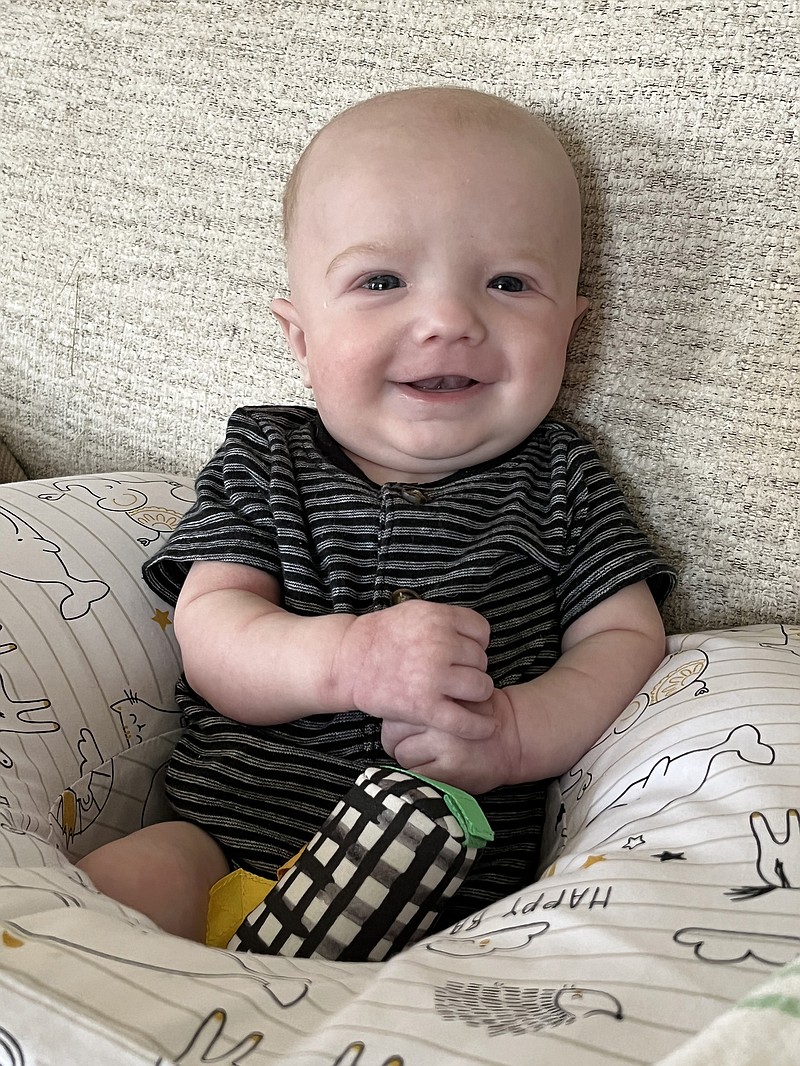 Owen Monroe smiles at his home in August 2022. (Monroe family/TNS)

DURHAM, N.C. -- The procedure had only ever been performed on pigs, doctors told Tayler and Nick Monroe as they huddled over their dying newborn son.

If they elected to go through with the surgery, their son would be the first person to ever undergo a partial heart transplant. If it worked, it might pave the way for thousands of newborns to receive similar procedures.

And it was likely the best bet for saving the baby's life, the doctors said.

"I was at the point where I said just do whatever you have to do to save him," Nick said.

During an eight-hour surgery in April, Duke University surgeons fused living arteries and valves from a donor's heart to a human heart for the first time, potentially creating a new field of cardiac surgery.

Whether Owen will face long term complications isn't yet certain. But months after the surgery, the child appears to be thriving, his parents said. And the doctors are optimistic they can help more children.

"I think that this is really one of the most profound developments in pediatric heart surgery in a long, long time," said Dr. Joseph Turek, who led the surgery. "This will really change the way that children are taken care of in the future."

At risk from birth

Owen Monroe was born with an extremely rare condition that fused the two main arteries of the heart together. On top of that, the valve he had leaked badly, allowing blood to pool in his heart.

"It's like winning the unlucky lottery," Nick Monroe said.

The first was to replace his entire heart, which could require waiting up to six months for a donor organ to be found. In all likelihood, Owen would die before a heart became available, said Turek, chief of pediatric cardiac surgery at Duke.

The second option was to use tissue from a cadaver to repair his heart, an extremely risky procedure for babies with valve leaks.

Even if that succeeded, dead tissue wouldn't grow with the rest of the heart and Owen would have to undergo several more heart operations throughout his life, each riskier than the last.

Neither option looked likely to save their son's life, doctors said. Things grew so dire Tayler and Nick began considering whether Owen, less than a week old, was destined to be an organ donor for another baby.

Then they heard about the experimental surgery.

One of the most challenging parts of performing cardiac surgery on a baby is they, and their hearts, eventually grow.

Before now, cardiac surgeons could replace the organ entirely and sentence their patient to a lifetime of anti-rejection medications or frequently replace the pieces to fit the growing heart, subjecting patients to numerous open-heart surgeries.

The partial transplant holds promise to meld the benefits from each approach.

Unlike patients with an entirely new heart, patients with a small amount of donor tissue may not have to take as many anti-rejection medications, which puts patients at risk of other diseases because the drugs suppress their immune systems.

Unlike the dead valve tissue that is typically implanted, the live valves used in the partial transplant can grow along with a baby's heart, hopefully eliminating the need for future surgeries.

Partial transplants may allow doctors to tap into a supply of donor hearts that go unused due to deficiencies. Carboni estimated about half of donated hearts fit that bill.

The organ used in Owen's procedure, for example, had been cast aside because the heart muscle was too weak. The valves were completely intact, though.

This could have huge implications for the nearly a quarter of babies on heart donor wait lists who die before they're given an organ, Carboni said.

'You would have no idea'

There are unknowns about the partial transplant doctors are working to figure out.

They don't know how much anti-rejection medications Owen will need or whether he could eventually be weaned off them entirely. Turek said he hopes to pursue clinical trials on patients who have the surgery in the future to better understand that.

"The intellectual part of me wants to say that this is a whole new world, and we're stepping through to an exciting new arena and all that stuff," Carboni said. "The real person inside of me says I don't know what the hell I'm doing and I hope I can do what's best for Owen along the way."

So far, so good, though. Owen Monroe, at home with his parents in Brunswick County, is no longer in the middle of a medical emergency.

Just like a normal five-month-old, he holds his head up, rolls around and has started venturing into the realm of solid foods, Tayler said.

Echocardiograms have shown the implanted valves have been growing with the rest of his heart, as hoped. The thin scar down the length of his sternum has started to fade.

"If you just met him on the street, you would have no idea any of this went down," Tayler said.