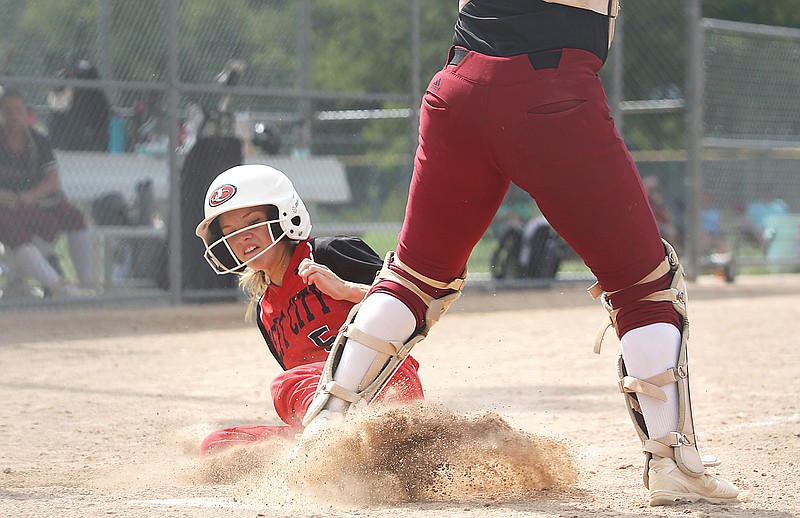 The Jefferson City Lady Jays put a tough Friday behind them with a great Saturday.

Jefferson City won both games on Day 2 of their home tournament, the Lady Jays Classic, at Binder Park by beating Lee’s Summit 10-9 and blanking Lee’s Summit North 7-0 to finish in 13th place in the 16-team field.

Lady Jays coach Zac Miller isn’t concerned with where his team finished in the bracket. Going 2-2 in a tough field is the highlight from the weekend.

“You’re looking at what everybody did last year,” Miller said. “It’s like, ‘OK, here’s a Final Four team, here’s a state champ,’ over and over and over with these teams.

“The goal is to keep getting better and better each game.”

Losing in extra innings in the first round Friday to Parkway West carried over into the Game 2 loss to Oakville and an 0-2 start to the Classic for the Lady Jays.

“Sickness and injury caught up with us that second game yesterday,” Miller said.

With the bases loaded and one out, Kaylee Redcay had an RBI single, pulling the Lady Jays within one run at 9-8. Two batters later, Avrey Reynolds hit a first-pitch single to right field, scoring both the tying and winning runs for the walk-off victory.

“That was huge,” Miller said. “The girls were down 5-0 after the top of the first inning. They got four runs in the bottom of the inning to make it a ballgame again.

Reynolds finished with three of Jefferson City’s 12 hits to lead the offense.

Summer Branch pitched all five innings for the Lady Jays to earn the win in the circle.

In the 13th-place game against Lee’s Summit North, Reynolds dominated in the circle, tossing a three-hit shutout while striking out 10 without yielding a walk.

“She’s still got a little sickness bug in her, she’s still not 100 percent,” Miller said. “But after she had been out all week, it was good to see her back out there.”

“That’s the way we’ve got to do it,” Miller said. “Balls are going to be put into play and we’re going to have to play defense behind our pitchers.”

Alexa O’Donnell blooped a single over the third baseman’s head to score two runs to give Jefferson City the lead in the bottom of the second inning.

“We just never looked back after that,” Miller said.

In the next inning, Amaya Ford had an RBI double to left-center field and Allison Carwile beat the throw home on a ground ball hit by Emma Friedman to extend the lead to 4-0.

Reynolds hit a sacrifice fly to center field in the fourth, while Amelia Cripe scored on a wild pitch and Redcay scored on an errant pickoff throw in the sixth.

“A lot of them took some really good at-bats,” Miller said.

Cripe and O’Donnell each had two singles to lead the Lady Jays’ 10-hit attack.