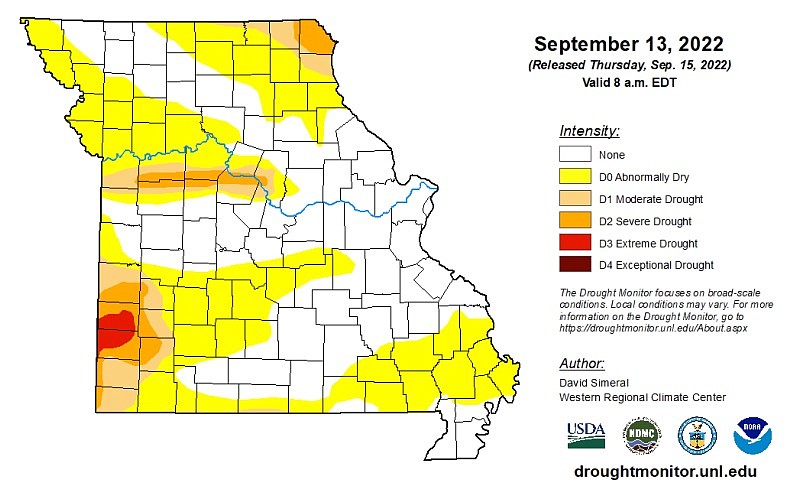 But other areas of the state mostly missed out on rain, and new drought conditions developed.

Overall, much of the state remains well below normal in annual rainfall, and Missouri's navigable waterways are much lower than normal.

As fall and winter harvest seasons approach, the next major concern facing Missouri's Drought Assessment Committee may be low Missouri and Mississippi river levels. River navigation is a primary way to move crops out of the Midwest.

The state was essentially drought-free for the first few weeks of June, he said.

"This thing really started to get some teeth right there at the end of June and beginning of August," Guinan said. "Then, rains came and began to get heavy."

For a large part of southern Missouri, the drought eased. But much of Jasper and Benton counties remain in extreme drought conditions.

"(The counties) can't shake that drought that began in June," Guinan said. "They just haven't seen those rain that we've been experiencing to the east."

Missouri row crops have "taken a hit," he said.

Precipitation has mostly been below normal across the state, he said. The primary exception has been the St. Louis area, which experienced record rainfalls and significant flooding.

Meanwhile, moderate to severe drought conditions have developed over a narrow corridor from Columbia to Kansas City, which has only received 5-6 inches of rain. During the June 1-Sept. 15 time frame, Columbia received 9.48 inches, a departure of minus-5 inches from the normal of 14.48.

Additionally, only about 3-4 inches of rain have fallen across northern parts of the state. Severe drought conditions are developing in northeast counties.

Farmers in Cooper County (northwest of Moniteau County) have reported ponds are drying up, Guinan said.

Mark Fuchs, senior service hydrologist with the National Weather Service, said the drought has been worsening over northern parts of Missouri and the four-week forecast doesn't offer much relief.

Southern Missouri may get some relief through rain, but conditions have already had a toll on crops.

"Crop conditions have been trending toward poor and very poor," Fuchs said.

He added fire danger is increasing across parts of central and southwest Missouri. Moisture content of fuels -- such as grasses and leaves -- are about 7-8 percent of normal.

"That makes fuels very prone to burning and rapid spread if conditions are favorable -- windy with low relative humidity," he said.

Generally, stream flows are good, Fuchs said, but the Missouri and Mississippi rivers are much below normal.

"Those two rivers being this far below normal are very concerning. Especially for navigation getting into fall and winter," he said.

The west and central parts of Missouri are "really getting dry," he continued.

River navigators are happy with water levels north of Kansas City, according to staff at the U.S. Army Corps of Engineers.

But from Kansas City past Boonville, the Missouri River isn't picking up much water, staff said, and is pretty dry.

Flow in the Osage River is very low. Water is only being released from Truman Reservoir to generate "firm power," or electricity that is intended to meet demand at any given time. Peak generation is occurring for a couple of hours, then brought back down.