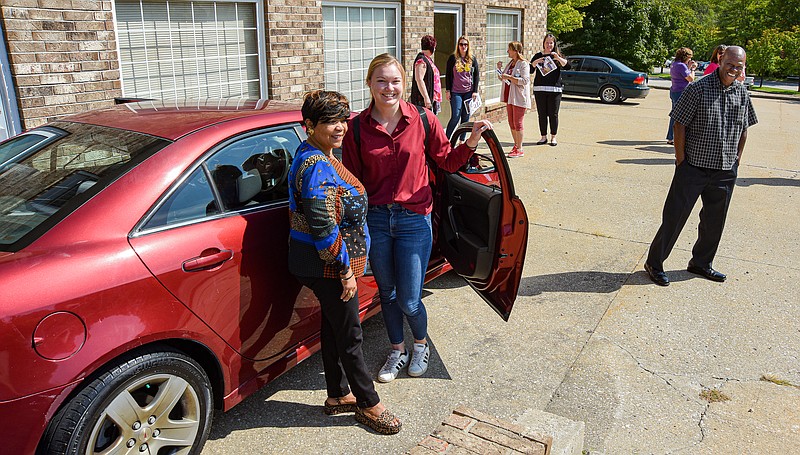 Julie Smith/News Tribune Anthony Conway, at right, stands with a huge smile on his face as he proudly watches Gwendolyn Jennings, left, and Paige Rackers pose near the car Conway delivered to them. Jennings and Rackers are with Rape and Abuse Crisis Service and have a client who will be the recipient. Conway is with Cars 4 Columbia and Caring Cars and found the vehicle to fill this need.

Anthony Conway is collaborating with Jefferson City nonprofits to bring his used car programs to the area.

Conway, who directs the Cars 4 Columbia donated car program, met with the public at the United Way of Central Missouri offices late Thursday morning. He delivered a car -- a 2010 Pontiac G6 -- intended for a Rape and Abuse Crisis Service client and shared details of his organization with area nonprofits.

Like its Columbia counterpart, his latest effort, Cars 4 Jefferson City, is intended to serve transportation-challenged low-income residents and families in Cole County. Through nonprofit partners, the program gives access to donated vehicles to help resolve personal transportation issues. It may also repair the nonprofits' clients' vehicles.

The organization could replace a service a Jefferson City-based nonprofit once offered. For most of the past decade, Working Wheels for Working Family has provided gently used vehicles to families in Cole County free of charge.

Working Wheels began its work -- taking in donated cars and reconditioning them -- in 2013. The Car Guys, a repair shop at 406 Monroe St., made necessary repairs to the vehicles, and clients would pay what they could afford for them.

Ann Bax, president of the United Way of Central Missouri, said Thursday her organization was surprised to learn Working Wheels had closed its doors. It was a reliable, helpful nonprofit to which the United Way had issued grants (which helped with operations) over the years.

Transportation has been a great need in Jefferson City for years, and remains a great need, Bax said.

The United Way on Thursday was trying to help Conway build relationships with several of its partner agencies, or to connect with Jefferson City resources.

"Transportation is an identified barrier (to steady employment)," Conway told more than a dozen listeners. "People work extremely hard just to get a job, then get fired because they can't get to work."

For a community to be transportation-efficient, it has to use all types of transportation. A bus system works very well for some, but not for all.

To date, Conway said, Cars 4 Columbia has donated 36 cars to residents of Columbia. But more eye-opening to Conway was how many people who needed transportation had a car but couldn't afford repairs for it. His organization has repaired more than 400 cars, he said.

Conway owns an auto dealership, and he has mechanics who work for him. One, Josh Remus, sometimes goes to clients' homes to repair their cars. He reminded listeners all efforts are done through a nonprofit.

"Our focus is on the donating car program because the only real solution for a person that has a transportation issue is (them having) their own vehicle," he said. "Not just a vehicle, but a reliable vehicle."

Once the organization realized it could help more people by repairing their vehicles, it began doing that as well.

Cars 4 Jefferson City can give someone a leg up, he said. Donated cars are not a "forever" solution to a person's transportation issues, Conway said. What donated cars do is buy the driver a little time to get a better car.

The program is modeled after Good News Garage -- a program started in Vermont. In about 25 years, the Good News Garage nonprofit program has provided more than 5,500 families throughout Vermont with donated vehicles, according to its website, https://goodnewsgarage.org.

Conway said clients are responsible for paying for vehicles or their repair costs. A number of nonprofits, he said, assist with repair costs.

On Wednesday, staff from a nonprofit approached Cars 4 Columbia with a client whose car had a list of 20 necessary repairs. The client had already sunk more than $2,300 in repairs into the vehicle, he said.

The car wasn't worth $2,300, it was like a house known as a "money pit." He said a lot of clients spend thousands of dollars on vehicles but end up still having no transportation afterward.

So many people become financially trapped by a car that will never meet their transportation needs, Conway said. So, Conway is considering getting her into a different car at a discounted rate, he said. It's another way of rectifying situations.

"Our job is to sit down with (a nonprofit) organization and seek a solution," Conway said. "We may not know what that solution is going to be, but we'll find it."