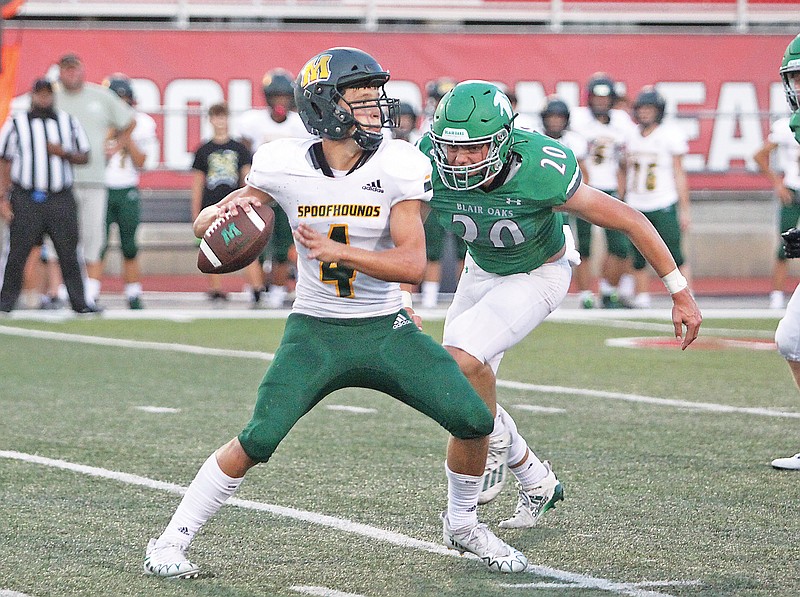 WARDSVILLE -- The Blair Oaks Falcons have shown they can do just about anything they want to on offense this season.

Problem is, so has tonight’s opponent.

The California Pintos welcome the Falcons tonight to Riley Field for their first true road game of the season. The Tri-County Conference matchup begins at 7 p.m. in California.

“They’re very much a rhythm-throwing team,” Blair Oaks coach Ted LePage said. “They really throw on time and their routes are very crisp, the quarterback throws to exact spots and they go get it. People know what they’re doing and they can’t stop it.”

California is coming off a 29-28 loss last Friday at Southern Boone. The Eagles scored a touchdown and the deciding 2-point conversion with :55.7 left on the clock.

The Pintos moved the ball inside the Eagles’ 20-yard line in the final minute but couldn’t answer with a touchdown on the game’s final play.

“California did everything it took to win the game,” LePage said. “It was just the 2-point conversion, that one point comes up huge.”

The Pintos dropped their season opener 47-34 to Savannah, which is receiving votes in Class 3 in this week’s Missouri Media Rankings. California then routed Fulton 61-34 on the road in Week 2.

“This is a team that could very easily be 3-0,” LePage said. “They had two breaks in two games that could have made for a 3-0 start.”

Leading California’s offense is senior quarterback Martin Kilmer. He has completed 60 percent of his passes for 705 yards with seven touchdowns and three interceptions.

Against Southern Boone, Kilmer was 21-of-36 passing for 289 yards with two touchdowns and one interception.

“He really has a good grasp of their offense,” LePage said. “He’s the rhythm-maker.”

Kilmer’s top receiving target is junior Ayden Bryant, who has 20 catches for 359 yards and four touchdowns. He has 100-plus yards receiving in all three games, finishing with seven catches for 107 yards and one score against the Eagles.

“Last week, he caught a touchdown pass late in the game against Southern Boone to put them back in the lead,” LePage said. “Southern Boone knew what was coming, they had him double-teamed. He just outran the secondary and caught it behind them.”

“Between them, they have more receptions than we have as a team this year,” LePage said.

The Pintos will mostly line up in a spread offense with three receivers, a running back and an H-back.

“The running back just sits off to one side or the other,” LePage said. “They try to spread you out, and they have a green light to throw it at any time.”

A majority of the carries have gone to sophomore running back Brooks Volkart, who had a breakout game against Savannah with 23 carries for 211 yards and two touchdowns.

California started with a 3-4 defensive front against Savannah, but after the Savages rushed for 398 yards, the Pintos switched to a 4-3 front for their next two games.

“It’s par for the course,” LePage said. “We’re preparing for what we’ve seen last, which is the 40-front, but this week we have practiced for the 30-front also.”

LePage noted senior Cody Williams is quick on the defensive line for the Pintos, while junior Austin Suen has been solid at outside linebacker.

“What they do on offense, they turn around and do on defense,” LePage said.

And at times, the Pintos’ best defense has been their offense.

“They get going so fast offensively, when you turn around and get the ball, you get in a panic, because you feel like you have to stay up with their offense,” LePage said. “They take chances on defense. They’ll send guys from every position. They’re trying to get the ball back, get in their offense and get into a track meet.”

For the first two weeks, Dylan Hair led the Falcon offense with his rushing performances. Then, against Osage, he threw for 399 yards and six touchdowns.

LePage said if teams decide to stack the box on defense against the Falcons, Hair can use his arm instead of his legs.

“When you’re rushing 14-15 yards per carry, people aren’t going to let you (run all the time),” LePage said. “If you can throw the short or to the outside routes, and make them defend 53 yards across the field, that opens up the lanes and you can throw it down the field.”

Seven players caught at least one pass from Hair in the win against Osage.

“We ran the ball really well after the catch,” LePage said.

Defensively, Blair Oaks has cut down on rushing yards allowed per play each week. Maryville averaged 5.6 yards per carry in the season opener, then Lutheran North had 3.5 yards per rush and Osage had 3.4 yards per attempt.

“In the Jamboree and in Week 1, we didn’t set the edges very well,” LePage said. “We’re setting the edges now with some authority, turning the ball back in.”

Communication has also been key for the Falcons’ early season success.

Notes: Blair Oaks, which is averaging 48.3 points per game and giving up just 18.3, remains at No. 2 in Class 2 in this week’s Missouri Media Rankings. … With last season’s 61-35 win at the Falcon Athletic Complex, Blair Oaks now leads the all-time series 25-24 against California. … Dylan Hair enters tonight’s game 209 yards shy of Nolan Hair’s career passing record of 8,786 yards at Blair Oaks. … Brady Kerperin led the Falcon defense with 13 total tackles last week against Osage. He leads the team with 34 tackles this season, while Carson Luebbering and Alec Wieberg are tied for second at 18 tackles. … Blair Oaks and California are both in Class 2 District 2 this season. The Falcons are currently No. 1 in the district standings with 57.67 points, while the Pintos are fourth with 38 points.