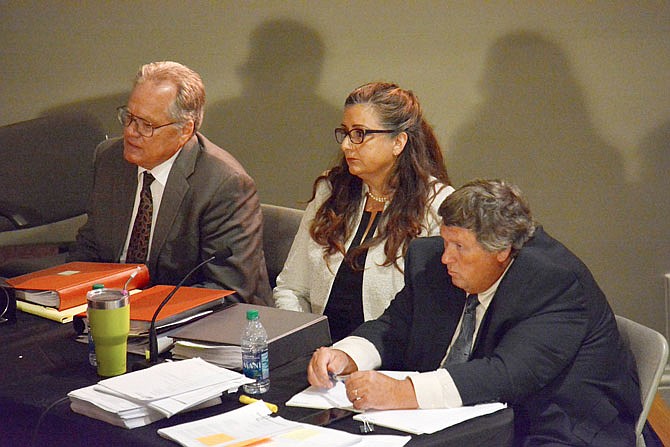 Tammy Ferry sits between her attorneys, David Moen, left, and Roger G. Brown, on July 10, 2019, during her hearing before the JC Schools Board of Education in the auditorium in the Miller Performing Arts Center.

A general mutual release signed in August marked the end of more than five years of litigation between Ferry and the district. The News Tribune obtained the document after requesting it from the district custodian of records.

Ferry first filed a lawsuit against the district, her former supervisor Joe Martin, and former Superintendent Larry Linthacum in 2017. The lawsuit alleged retaliation, sex discrimination and a hostile work environment.

She again sued the district after she was fired in July 2019, alleging the district was retaliating against her. The district said Ferry had violated privacy laws by transferring work files to her personal Google account.

Ferry had argued the opinion misinterpreted FERPA, ignored previous cases and overlooked her right to preserve evidence for her trial.

Per the terms of the agreement, neither party has admitted liability.

According to the document, the district will pay or direct payment of a total of $1,225,000 to Ferry within 10 days of Ferry's signing of the release.

A total of $540,000 will go to Popham Law Firm to cover Ferry's attorney's fees and expenses. Ferry will receive $30,000 for "compensation for economic damages" and $155,000 for "non-economic damages." Any portion paid as wages will have taxes deducted.

The district also agreed to pay $500,000 to MetLife Assignment Company to fund periodic payments to Ferry of $6,372.34 monthly for seven years, beginning in January 2023 and ending in December 2029.

As part of the agreement, Ferry was required to destroy all district files that were transferred to her personal Google account and sign a document testifying she has done so. Ferry also cannot seek employment with the district again.

The district said in a statement the matter was resolved to the parties' mutual satisfaction. Ferry's attorneys did not respond to requests for comment Wednesday.