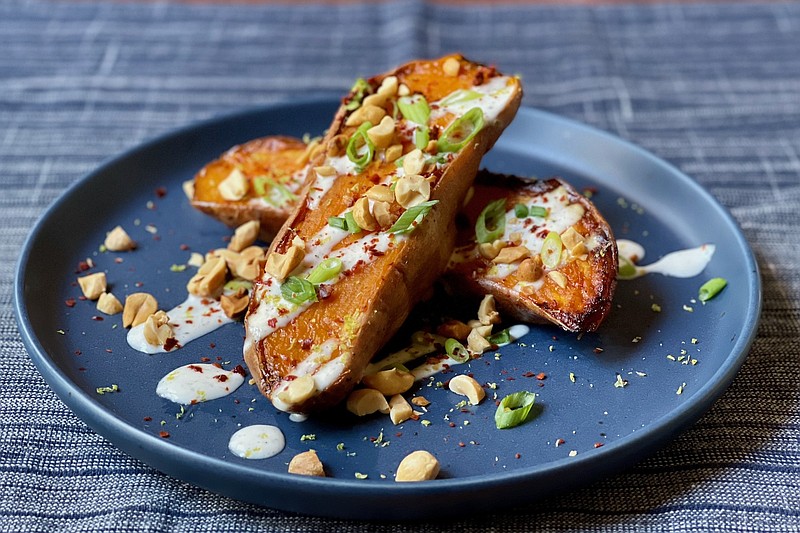 It isn't fall yet, but it is September, and that's close enough for me. So I'm officially giving myself -- and you -- permission to start preparing all of your favorite fall foods.

One such food for me is sweet potatoes. By my calculations, we're at the very beginning of sweet potato season.

According to the University of Arkansas Cooperative Extension, sweet potatoes are ready to harvest 90-110 days after planting, depending on the cultivar. Add in 10 days of curing and sweet potatoes that were planted in late April or early May should be ready to eat about now. Properly stored, they'll keep for about six months.

This recipe combines steaming and roasting for perfectly cooked, silky fleshed and slightly caramelized tubers. It is adapted from "Food52 Simply Genius: Recipes for Beginners, Busy Cooks & Curious People" by Kristen Miglore with a foreword by Amanda Hesser (Ten Speed Press, Sept. 27, $35). The genius behind this sweet potato prep is Nik Sharma, author of "The Flavor Equation."

After preparing the recipe as written, I made some tweaks to suit my preferences -- reducing the maple syrup by half and doubling up on the green onion and chopped peanuts.

Both the cooked sweet potatoes and the dressing will keep, refrigerated in separate airtight containers, for about a week, making this an ideal make-ahead recipe. Or for small households, something to have on hand for meals throughout the week.

I really liked the combination of sweet, tart, tangy and spicy of this dish.

1 lime, zested and juiced, divided use

Arrange the sweet potatoes, cut side up, in a roasting pan, leaving about 1 inch between each potato half. Smear the cut sides with butter and sprinkle with salt. Cover tightly with foil and bake 20 minutes. Remove foil, flip the sweet potato halves over and continue baking, uncovered, for 20 minutes or until the potatoes are very tender. Let rest 5 minutes.

In a small bowl, whisk together 1 tablespoon of the lime juice, creme fraiche or sour cream, maple syrup, fish sauce (if using) and black pepper. Taste and season with salt.

To serve, drizzle the dressing over the warm sweet potato halves and top with green onion, chopped peanuts, lime zest and pepper flakes. Serve the remaining dressing on the side.

Note: I haven't tried it, but I think full-fat plain Greek-style yogurt would also work.