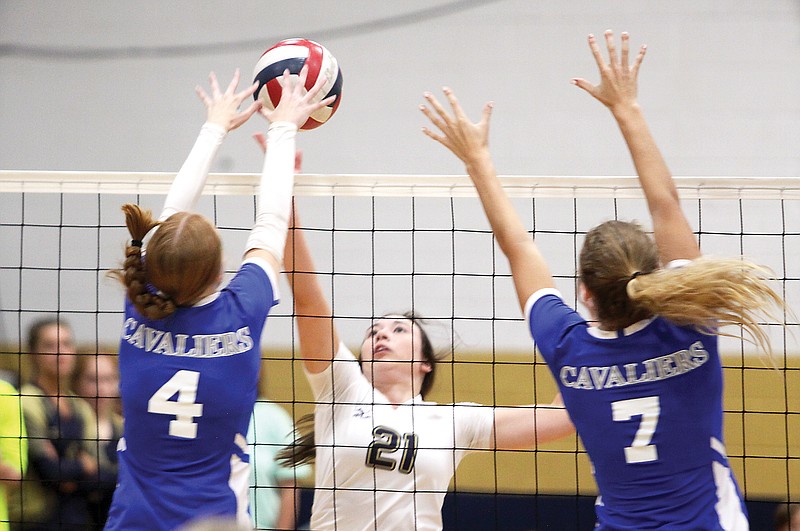 “Well, we beat a district opponent and a conference opponent. Does that count as two wins?” Harris jokingly said after the Lady Crusaders won in a 25-18, 25-11, 25-22 sweep at Helias Gym.

“It was a good win. Capital City has seniors who started as freshmen, and we knew they were going to be better this year. They made us work.”

It wasn’t the best of starts for Helias, which had seven errors that accounted toward Capital City’s first 11 points of the match.

“That’s been one of the weak things that we’ve been trying to work on,” Harris said. “It seems like we give points away in bunches.”

But Capital City had plenty of momentum coming into Monday’s Central Missouri Activities Conference match. The Lady Cavaliers won five of the seven matches they played Saturday at the Hickman Tournament, as they brought home their first-ever trophy with a third-place finish out of 10 teams.

“It gave them more confidence to play together as a team, and know that we can play the way we know how to play, if we accomplish each of our jobs,” Capital City coach Kelsey Vogler said. “I feel like they did accomplish things and they did grow.

“But let’s be honest, Helias is a very quality team.”

Helias and Capital City were tied at 15 in the first set. A service error gave the lead back to Helias, then Chapel Dobbs had three kills to stretch that lead to 19-16.

A kill by Faith Ann Meyer and aces from Tori Schmidt and Dobbs capped a 10-3 Helias run to finish the set.

“That’s something all teams talk about and want to work on, is finishing games, finishing sets,” Harris said. “Tori came in and had some really tough serves that kept them out of their offense.”

The Lady Crusaders then started the second set on a 12-3 run, as Izzy Herrbold served two aces and Schmidt added another ace during that stretch.

“Momentum is a fickle thing,” Harris said. “It’s hard to grab ahold of and then it’s hard to keep.”

Helias was aggressive at the net to finish the second set, as Summer Hake had three kills, Dobbs had two kills and Josie Morasch and Libby Gaines each had a kill during an 8-2 run to finish the set.

“I was very impressed with the second set, we played very well,” Harris said.

Reagan Carel served three consecutive aces early in the third set to give the momentum back to Capital City.

Helias went on a 4-0 run with three kills by Dobbs and a ace from Hannah Luetkemeyer to push to an 11-5 lead.

Aslyn Marshall answered with a kill and a block for Capital City, then Carel had a pair of kills. A Helias error tied the score at 15.

But like the first set, Helias was able to regain the momentum. Landrey VanOverschelde, one of the two setters on the court, went up for the spike and got the kill to give the lead back to the Lady Crusaders.

“She can be a strong hitter,” Harris said. “Just like anybody else, timing is big, and her timing is good. She’s as good as any hitter we have.”

Capital City put up a fight late in the third set, closing the gap to 23-21. Haley Libbert kept a rally going by going for a ball that was nearly out of her reeach and was able to get the ball to just clear the net for an impressive kill.

Hannah Hentges finished the third set with a kill for Helias.

Dobbs led Helias with 17 kills, while VanOverschelde had 23 assists and Herrbold finished with 22 digs. Hake also posted five kills for the Lady Crusaders.

For Helias (7-2-2), Kendal Herzing had six kills, Lexie Bruns had 10 assists and Sophie Verslues had 11 digs.

For Helias (11-1), Savanah Pemberton and Claire Carel had five kills each, Ellie Anderson had nine assists and Liza Boyer had 11 digs.