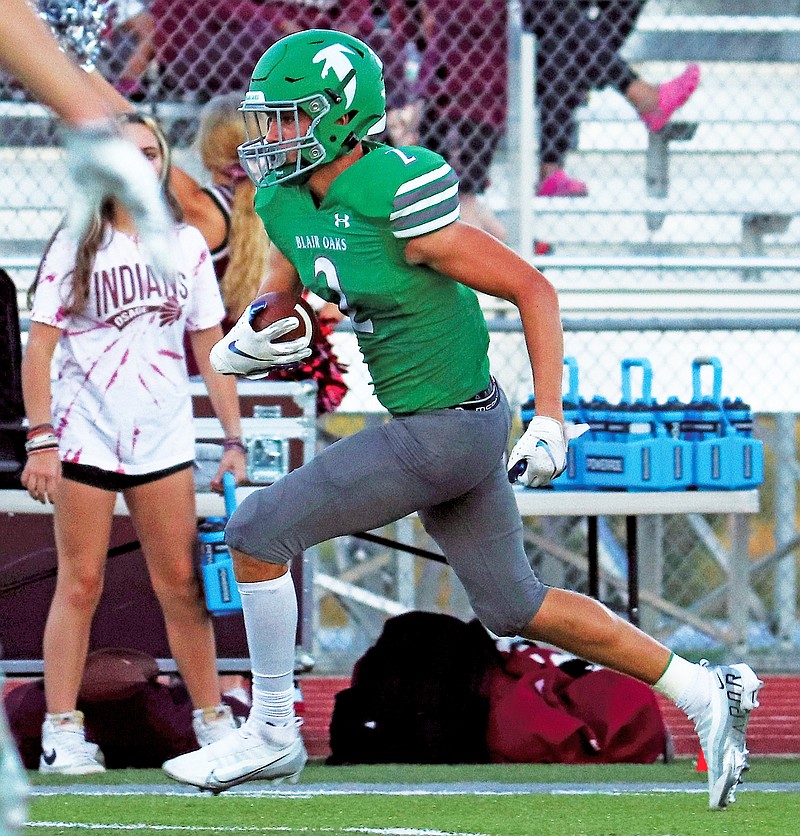 Blair Oaks wide receiver Alec Wieberg runs after making a catch during Friday night’s game against School of the Osage at the Falcon Athletic Complex in Wardsville. (Kate Cassady/News Tribune)

WARDSVILLE -- The School of the Osage Indians came out determined to keep Blair Oaks quarterback Dylan Hair from running with the football Friday night.

As it turns out, his right arm is just as effective as his legs.

Hair completed 14-of-15 passes for 399 yards and six touchdowns, as the Falcons cruised to a 56-13 victory in their Tri-County Conference opener at the Falcon Athletic Complex.

“They came out in a three-man front, they put seven guys in the box,” Blair Oaks coach Ted LePage said. “I know what they were doing, Dylan had 520 yards rushing in his first two games. It would be silly not to try and stop him.

“We feel like we can throw the ball, and that’s what we did. We took what they gave us.”

Gallery: Blair Oaks Football vs. School of the Osage

On the first play from scrimmage, Blair Oaks mishandled the snap, but Hair scrambled and found Nick Closser, who caught the pass and ran 57 yards along the left sideline for a touchdown just 22 seconds into the game. Nolan Laughlin made the first of his eight extra-point attempts to put the Falcons in front 7-0.

Hair connected with Closser for a 24-yard touchdown on the Falcons’ next possession. Osage’s Landon Childs intercepted Hair on Blair Oaks’ next drive, meaning none of Hair’s pass attempts touched the turf Friday night.

However, the Indians never moved the chains on their first three offensive series.

After an Osage punt, Hayden Lackman fumbled a handoff, but the ball bounced back into his hands and he ran it up the middle for a 31-yard touchdown, extending the Falcons’ lead to 21-0 with 1:48 left in the first quarter.

Osage quarterback Konner Vaughn scored on the first play of the second quarter on a 43-yard run. John Kimrey booted the extra point to cut the Indians’ deficit to 21-7.

Blair Oaks answered with four touchdowns in a span of 6:37 in the second quarter.

Alec Wieberg caught three straight touchdown passes from Hair. The first was a 41-yard pass downfield, then the next two touchdowns were strikes of 35 and 30 yards down the middle of the field.

“On Thursday in our team meeting, I said, ‘We’ve got to spread the field. Let’s have some fun throwing the football,’” LePage said.

Brady Kerperin forced a turnover on downs with a fourth-down sack, then three plays later, he scored on a 2-yard touchdown run with 4:30 left in the first half, as Blair Oaks went into halftime with a 49-7 advantage.

Neither team scored in the third quarter, but the Falcons scored their final touchdown on the opening play of the fourth quarter, as Hair connected with Zack Prenger for an 18-yard touchdown pass.

Hair more than doubled his season totals Friday, as he had just 12 pass completions for 340 yards in the first two games. He is now 209 yards shy of the career passing record at Blair Oaks, which is held by his older brother, Nolan.

“We caught the ball really well,” LePage said. “And we protected well. I don’t think Dylan was really under any pressure.”

Late in the fourth quarter, the Indians recovered a muffed punt return inside the Falcons’ 5-yard line. Aidan Williams scored on a 1-yard run with 3:18 remaining for Osage’s other touchdown.

Jackson Funderburk led the Indians with 59 yards on 10 carries, while Vaughn had 42 yards rushing. The Falcons limited Williams, Osage’s leading rusher, to 13 yards on 11 attempts.

Holden Brand also had an interception for the Falcon defense.

Blair Oaks (3-0, 1-0 Tri-County), ranked No. 2 in Class 2, plays its first true road game next Friday at California. The Pintos (1-2) lost 29-28 on Friday at Southern Boone, which scored a touchdown and the winning 2-point conversion with :55.7 remaining in the game.