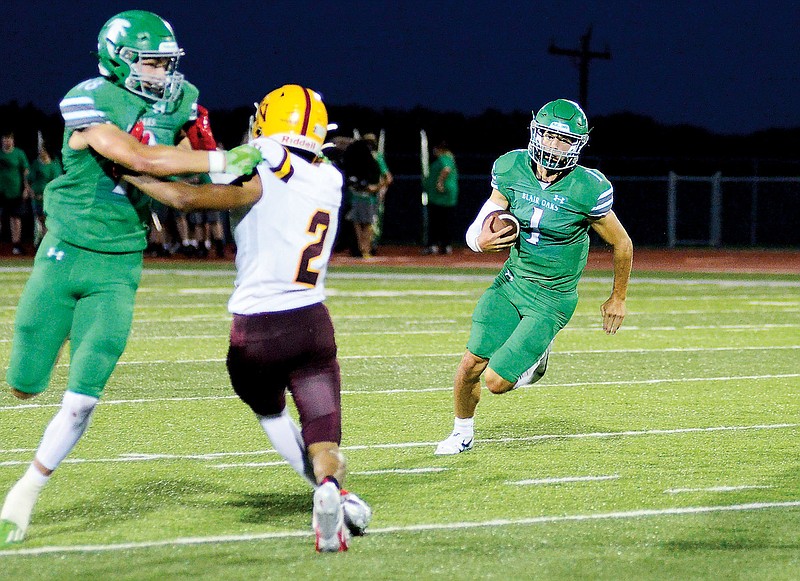 They haven’t forgotten that. They want to be back on top. And it all begins tonight.

Week 3 marks the beginning of the Tri-County Conference schedule, and the Falcons will play their first of seven straight conference games tonight against the School of the Osage Indians. Kickoff is at 7 p.m. at the Falcon Athletic Complex.

“We get to come back and try to climb that ladder back to being one of the better teams in the conference,” Blair Oaks coach Ted LePage said.

The Falcons and the Indians are familiar foes. They played each other in back-to-back weeks in the 2021 season, as Blair Oaks won the regular-season finale 71-43 at Osage Beach, then turned around an blanked Osage 53-0 at home in the district opener.

Osage (0-2) dropped both its non-conference games, losing 41-19 at home in the season opener to Jefferson City and falling 43-37 last Friday at Moberly, as the Spartans snagged a game-clinching interception in the final minute.

The Indians averaged 26.5 points per game last season. However, their two highest point totals of 48 and 43 both came in losses.

Osage lost quarterback Brockton McLaughlin -- the Class 3 track and field 100- and 200-meter dash state champion -- to graduation after he played a big role in the Indians’ run offense.

Taking over at quarterback for the Indians is senior Konner Vaughn, who missed the season opener but returned for last week’s game at Moberly. He gives the Indians another running option in the backfield.

“The option was in play more than it was in Week 1,” LePage said. “In Week 2, they had a lot more option, and this man can really run the football.”

The option plays a big part of the Indians’ wing-T offense.

“That makes it much more dangerous,” LePage said. “Last year, the first time we played them, if you got matched up one-on-one with their quarterback, they make one guy miss and they’re gone.”

Among the key runners in Osage’s backfield is senior Jackson Funderburk (5-foot-6, 170 pounds), who had a pair of rushing touchdowns against Jefferson City.

“He plays their offset halfback and he comes around in their buck sweep,” LePage said. “When he heads north-south, he’s not really tall, but that helps him because he has a low center of gravity. He’s a big back, he’s so hard to bring down, he’s always moving forward.”

Funderburk was a key fixture in Osage’s offense last season, but sophomore Aiden Williams (5-9, 185) has emerged as the team’s leading rusher this season. He has had back-to-back 100-yard rushing performances with three touchdowns.

“He’s taller (than Funderburk), but he has the same type of build,” LePage said. “They use him effectively, he’s their downhill back.”

“What really scares you about them is you get lulled to sleep, and then they throw it out to (Graber),” LePage said. “He does such a great job catching the ball, and then running after the catch.”

Defensively, LePage said Osage operates out of a 4-3 front. However, he’s also prepared for that to change. Last season, the Indians switched from a 4-3 defense to a 3-3-stack when they played the Falcons.

Funderburk joins the list of two-way starters as a linebacker for Osage’s defense.

The Indians are allowing 42 points per game, a season after giving up 39.8 points per contest.

“The thing that has hurt them is the big play,” LePage said. “Last week, Moberly did not move the ball effectively on them. It was just big-play opportunities and a couple miscues on special teams.”

LePage said he looked at last year’s game film against Osage first, then reviewed the film from Weeks 1 and 2.

“You go off this year’s film statistically, looking at what the offense and the defense are doing,” he said. “But at the same standpoint, you want to get that idea of, if there was something that hurt you last year, I guarantee you they’re going to remember what hurt you.

“There’s a lot of familiarity with what they did last year and this year.”

Blair Oaks (2-0) is coming off a 35-0 win against Lutheran North, its first shutout since beating Osage in the district opener last season.

“That’s going to be very key tonight, there are going to be a lot of times when we’re going to have to make one-on-one tackles,” LePage said. “If you go back and look at Maryville from Lutheran North, that may be the biggest success story we had, being able to tackle in the open field.”

The Blair Oaks defense had three takeaways and forced four turnovers on downs against Lutheran North.

“I’m not saying we didn’t get any breaks in the game, but we caused those breaks, and that’s what good football teams do,” LePage said.

Notes: Blair Oaks is 31-16 all-time against Osage, winning the past 11 games in the series. … Blair Oaks received all 11 second-place votes to get the No. 2 ranking in Class 2 in this week’s Missouri Media Rankings. Lamar was the unanimous choice at No. 1. … With the loss to Blair Oaks, Lutheran North (1-1) dropped two spots to No. 6 in Class 3. Maryville (1-1), which lost to Blair Oaks in the season opener, moved up three spots to No. 7 in Class 3 following a 49-6 win against Harrisonville. … Last week, Blair Oaks quarterback Dylan Hair pushed his career total yards to 12,614, passing Union’s Jordan Webb (12,475) for the No. 1 spot in the MSHSAA record book. Hair, who is already the Falcons’ all-time leading rusher with 4,436 yards, is No. 2 on the school’s career passing list with 8,178 yards. Nolan Hair holds the school record with 8,786 passing yards.