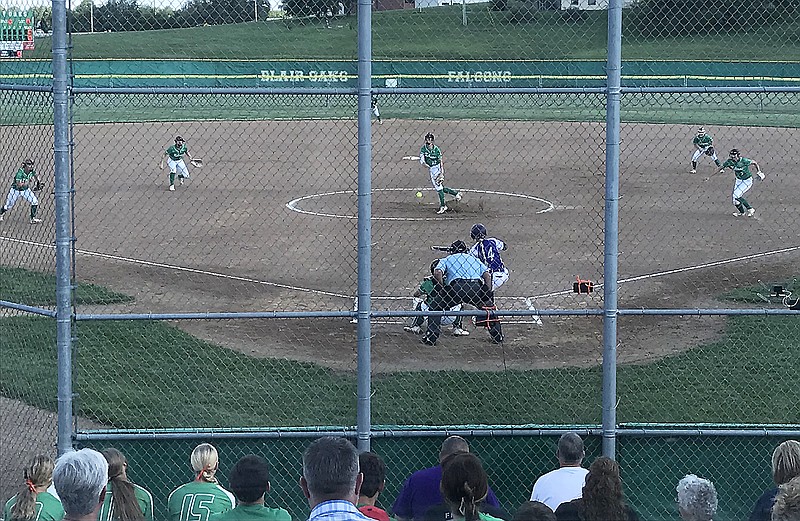 Blair Oaks pitcher Olivia Moyer delivers the ball to the plate to Hallsville's Kristen Jones during the first inning of Wednesday's game at the Falcon Athletic Complex in Wardsville. (Greg Jackson/News Tribune)

WARDSVILLE -- Tuesday night was a tough night for hitting for the Blair Oaks Lady Falcons, especially with runners in scoring position and two outs.

So naturally, they scored all of their runs with two outs the next night.

“It was big to jump on them early,” Blair Oaks assistant coach Jill Linnenbrink said. “It’s always good to get a couple runs pushed across in that first inning.”

It’s still early in the season, so the Lady Falcons shifted a few players around the batting order from one night to the next.

Emma Wolken, who began the season as the No. 2 hitter, batted cleanup against Hallsville. One night after hitting a solo home run in a 2-1 loss to Capital City, Wolken lined an RBI double to left-center field in the bottom of the first inning against the Lady Indians, scoring Kally Bruce to put the Lady Falcons in front 1-0.

“She did a real good job today,” Linnenbrink said. “Both games have been really good for her.”

Other players moved around the batting order for Blair Oaks, as Baley Rackers bumped up from No. 9 to No. 2 and Chesney Luebbering went from No. 7 to No. 5.

“It’s early and we wanted to see some different things,” Linnenbrink said. “You never know what can happen. Yesterday’s game was yesterday’s game.”

Wolken scored from second base when Chesney Luebbering reached on an infield error, putting Blair Oaks in front 2-0 after one inning.

The Lady Falcons loaded the bases with no outs and the top of the batting order coming to the plate in the second inning. Hallsville pitcher Abby Leer nearly escaped the jam with a fielder’s choice and a strikeout, but Bruce smacked a two-out, two-run single to right-center field, scoring Madison Vaughan and Belle Boessen to double the lead to 4-0.

Blair Oaks only had two hits through two innings, but eight of the first 13 batters reached base to help build the four-run lead.

“The girls came out and we started well,” Linnenbrink said. “I was pleased with them.”

Leer settled down for Hallsville and followed that with four shutout innings, retiring eight batters in a row at one point.

Hallsville had 10 batters reach base against Moyer, but only one baserunner made it to third base.

“She had good composure out there in the circle today,” Linnenbrink said. “If somebody got on, either she took care of it or others in the field took care of it.”

Twice Hallsville attempted to bunt with a runner on base, and each bunt resulted in a pop-out for Blair Oaks. The Lady Falcons also caught a pop-up on a bunt attempt Tuesday against Capital City and did the same in last week’s win against Centralia.

“That has a lot to do with Olivia’s pitching … but we try to work on our bunt defense as much as we can,” Linnenbrink said. “We know that teams might start bunting against us, especially if they can’t make contact.”

“We have three games next week and the Jefferson City tournament next weekend,” Linnenbrink said. “It’s just about getting into a rhythm.”

Meredith Blakemore had a single and a double to lead Hallsville (6-2, 1-1 Tri-County), which hosts Fatima today.

The Lady Falcons also won the JV game 5-4, improving their record to 5-2.