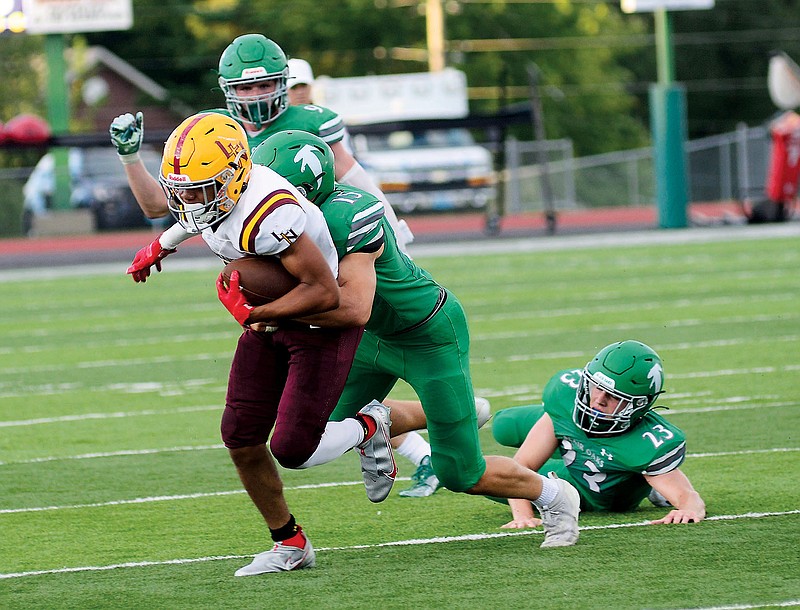 WARDSVILLE -- Blair Oaks quarterback Dylan Hair scored touchdowns on four of his five carries in the third quarter Friday night, averaging more than 50 yards per carry on his touchdown runs.

As impressive as his performance was, it still took a back seat behind the Falcon defense.

Blair Oaks blanked the Lutheran North Crusaders for a 35-0 victory at the Falcon Athletic Complex. The defense forced three takeaways and another four turnovers on downs to preserve the shutout.

It was the first time Lutheran North has been shut out since Sept. 5, 2009, when the Crusaders lost 14-0 to Westminster Christian.

“To not let them score was a tremendous plus for our football team,” LePage said.

Fittingly, it was the Blair Oaks defense that scored the game’s first points.

“Coach (John) Butler told me yesterday we haven’t had a defensive score in a while,” LePage said. “He looked up a statistic that said 92 percent of the time, when you get a defensive score, you win. He challenged the guys tonight to do that.”

Lutheran North quarterback Dakarri Hollis lost control of the football as he was scrambling near midfield. Linebacker Holden Brand, one of Blair Oaks’ two senior starters on defense, picked up the loose ball and ran it 44 yards for a touchdown in the final minute of the first quarter.

The defensive fun started before that touchdown. Lutheran North’s opening possession was a 10-play, 53-yard drive that ended with an incomplete pass inside the Blair Oaks 25-yard line.

The Crusaders’ next drive resulted in a three-and-out.

“Once we got those first few stops, we thought, ‘All right, we can stop them,’” Brand said. “It feels good to get stops against athletes of that caliber.”

For the second straight week, the Blair Oaks defense shut down its opponent’s running game, leading to Hollis attempting 32 passes. He threw 16 passes in the season opener against Hazelwood Central.

“Our defensive front took away their run lanes and kept the ball bouncing laterally,” LePage said. “When that happened, we were able to take our outside linebackers and our safeties and pursue the back. They got us on a couple (plays), but I thought our tackling was our best in two years.”

Lutheran North had more scoring opportunities. On their next possession, the Crusaders reached the Blair Oaks 5-yard line, but two runs for no gain and an incomplete pass on fourth down led to another turnover on downs.

Linebacker Brady Kerperin recovered a fumble on the second play of the second half, then batted down a pass on fourth down inside the Falcons’ 25-yard line for another turnover on downs.

The Crusaders had one final scoring opportunity late in the third quarter, but cornerback Jake Hagner intercepted a pass from Hollis in the end zone for a touchback.

“We played good defense and were able to get a shutout,” LePage said. “At times, it was ugly, but games are hard and you have to make the adjustments and keep playing.”

It was the second straight week the Falcon defense had three takeaways.

“This year, we put a big emphasis on taking the football away,” Brand said.

Lutheran North’s defense showed up in the first half, holding Blair Oaks to just 66 yards of total offense in the first 24 minutes.

“They owned us in the first half,” LePage said.

Hair had 11 carries for 11 yards at intermission.

“The last time we played Lutheran North, he didn’t have a very good game,” LePage said. “At halftime, I told him, ‘You’re trying to make it happen too much. Let the game come to you.’”

So the Falcons decided to go back to an option offense, which is Hair’s bread and butter.

“We thought we could do some things going with a spread offense,” LePage said. “They started bringing the house. When people are bringing pressure against option teams, you have to be careful because you have to match up with option matchups.

“If you put one guy on Dylan Hair, and he misses, it’s going to be a long night.”

Blair Oaks held onto the football for the game’s final 10:21. Hayden Lackman had eight carries on that final drive, as he finished with 14 rushes for 60 yards.

“The more we ran option, and the more Hayden Lackman got going, to more it really started to take off,” LePage said.

Hair finished the game with 223 yards rushing and another 90 yards passing. Those numbers improve his career total yards to 12,614, which moves into No. 1 on Missouri’s all-time total yards list in the MSHSAA record book.

“He’s an extreme talent, we’re blessed to have him on our team,” LePage said. “He does not care about any of that. He cares about his teammates. … He wants to win.”

Blair Oaks is 3-0 all-time against Lutheran North, also winning in the state playoffs against the Crusaders in 2018 and 2020.