Students try out construction jobs at Build My Future event 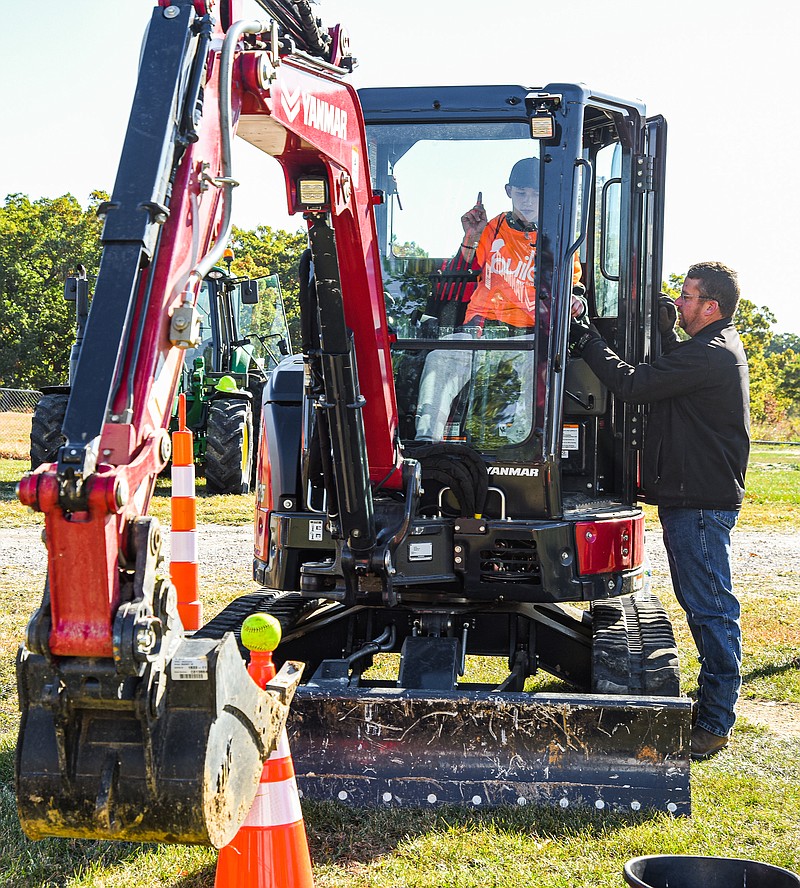 Julie Smith/News Tribune photo: Under the direction of Andy Christian, standing, Jordan McCoy follows directions to pick up the softball from the traffic cone before swinging the arm around to drop the ball into the container on the ground. Christian serves as the director of operations for Sellenriek Construction and was at the Jaycees Cole County Fairgrounds where students like McCoy, who is a junior at Mexico Education Center, could try any number of types of equipment as part of 2022 Build My Future activities.

Central Missouri students with an interest in building, welding, excavating and other technical careers flocked to Jaycees Fairgrounds on Tuesday for "Build My Future," a career day and industry showcase featuring more than 50 vendors.

Charlyce Ruth, an organizer of the event, said it started in 2017 in Springfield but has expanded over the years to other areas in the state. It now takes place in six different locations in Missouri and, by the end of the year, is expected to have reached about 8,000 high school students. This is the second year it has been offered for Central Missouri.

Among the new vendors this year are Bloomsdale Excavating; Women of Asphalt, an organization dedicated to empowering women in asphalt careers; and Lunda, which is working on the Rocheport bridge.

Inside the barn and out of the cold, students could explore booths featuring the National Guard, the American Welding Academy and DeLong's Inc., among many others. There were booths where students could try welding a patch onto a roof, with the fastest time earning them recognition; booths where they could learn about weatherization by watching the air flow in a model house; and booths where they could put together their own metal toolbox, build a birdhouse, or put up drywall and plywood.

If they were willing to brave the chill outside, there were opportunities to try out larger pieces of equipment. Frank Twehouse Excavating Company Inc. had set up a course for students to guide a remote-control compacter through. There was an excavator attached to a large, flat metal plate, forming a giant "putter" that students could use to guide a large rubber ball into a pop-up soccer goal. A precision station required students to carefully use an excavator to tip basketballs, volleyballs and softballs off the top of orange cones and into a bucket, then drop them off in a trash can. At the end of the lot, students could see Berendzen Construction smoothing out concrete.

There were also a few opportunities for students to play a casual game of cornhole or giant Jenga.

Trina Lieb, guidance counselor at Calvary Lutheran High School, said 11 students came to the event with an interest in drafting, welding and other pursuits.

She said she suspected there would be a few more students next year after the students who came this year went back to school and talked to their peers.

"We've got to meet the needs of our students," she said, noting the event provides an opportunity for students at a time when many industries are hurting for workers.

Helias had 19 students at the event.

Cody Bashore, Nichols Career Center director, said most Nichols students attended with their home schools, many of which also brought freshmen and sophomores, but Nichols brought about 30 students.

"It's only the second year we've had this, and the kids just love it every time they come. They get to drive the big heavy equipment. They get to run the simulators," he said. It offers them a safe way to practice skills they may not have thought about.

"The work itself looks a lot different than it did 20-30 years ago, so they need some high-tech kind of minds to operate the machinery," Bashore said.

"Over half of our students go to college, and the other half pretty well go out into the industry or a state technical school, they're getting certifications in some of these areas, and they're not well-represented at some of the career fairs and things schools put on," he said. "So it's just good to get kids outside, able to explore some of the career paths that aren't typically highlighted. And they're good-paying jobs." 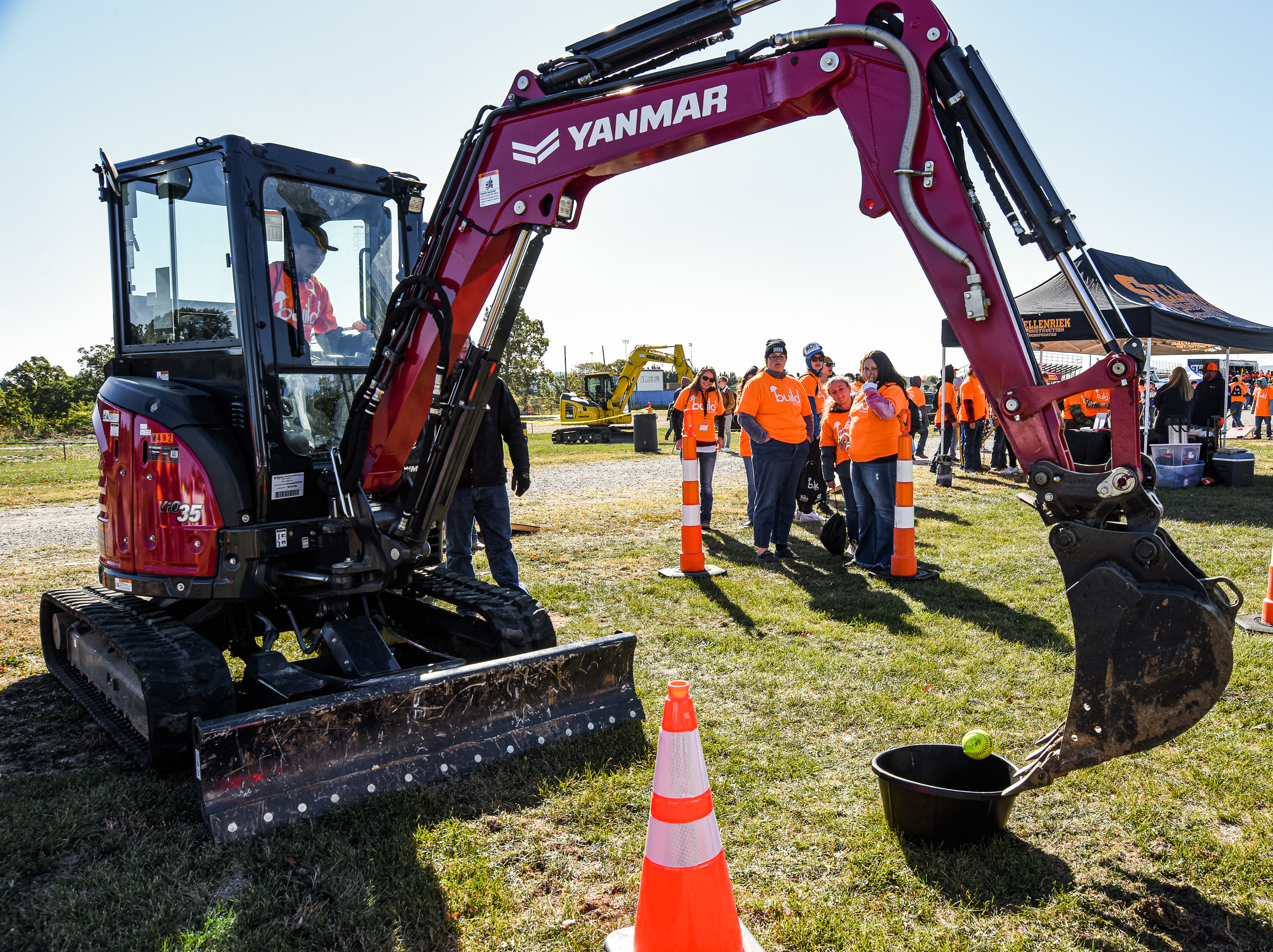 Julie Smith/News Tribune photo: Under the direction of Andy Christian, standing, Jordan McCoy follows directions to pick up the softball from the traffic cone before swinging the arm around to drop the ball into the container on the ground. Christian serves as the director of operations for Sellenriek Construction and was at the Jaycees Cole County Fairgrounds where students like McCoy, who is a junior at Mexico Education Center, could try any number of types of equipment as part of Build My Future activities. 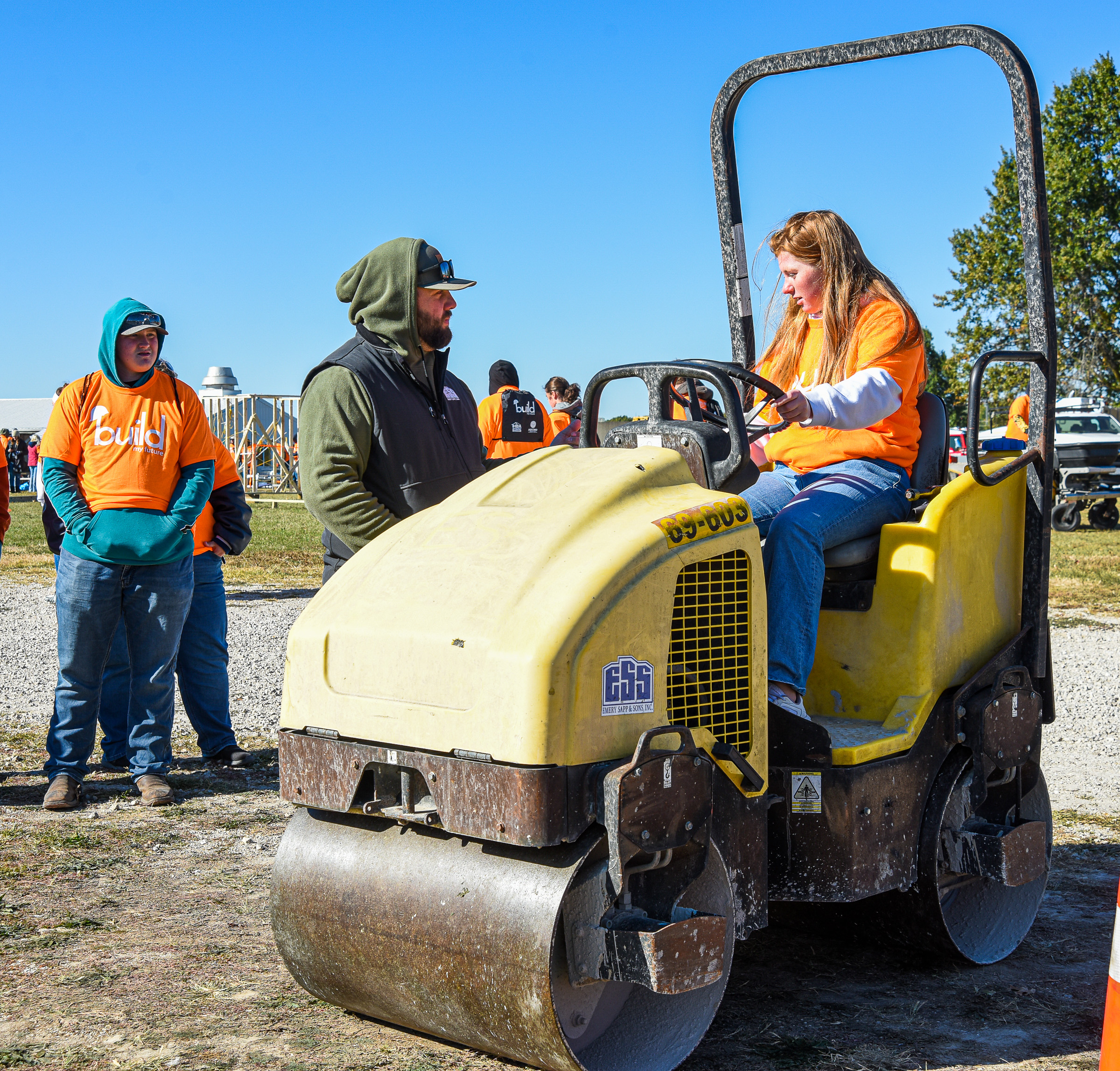 Julie Smith/News Tribune photo: Hannah Jankowski takes tries her turn driving a roller Tuesday during Build My Future try-it activities at Jaycees Cole County Fairgrounds. Directing Russellville High School student Jankowski on the operation of the machine is Jake Elder of Emery Sapp and Sons, where he serves as the workforce coordinator. 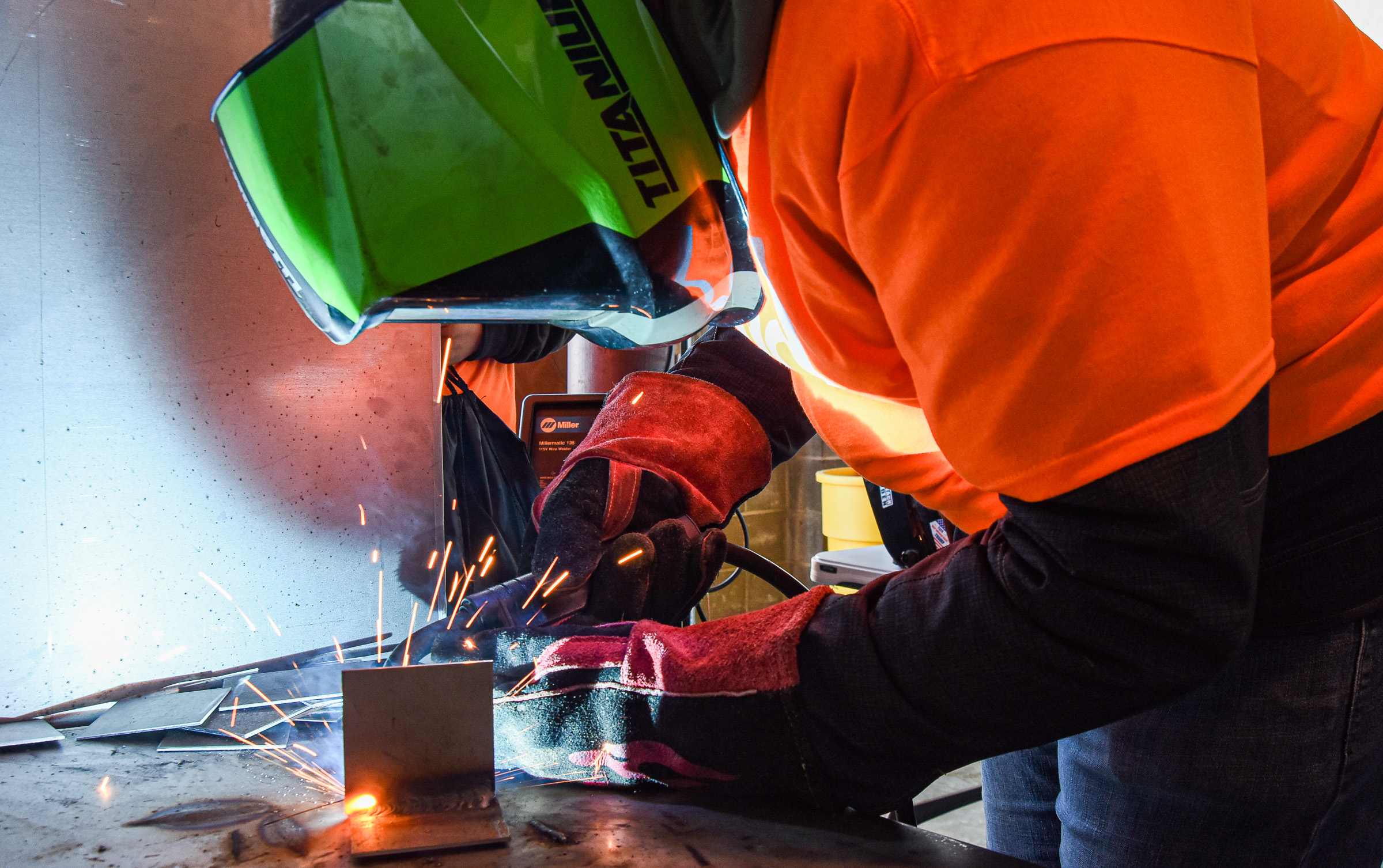 Julie Smith/News Tribune photo: Pilot Grove High School junior Jesse Dillon takes a turn using a Mig welder Tuesday during Build My Future activities at the Jefferson City Jaycees Cole County Fairgrounds. Price was one of over 1,800 students to take a trip through the multi-purpose building and fairgrounds to try a number of different pieces of equipment. 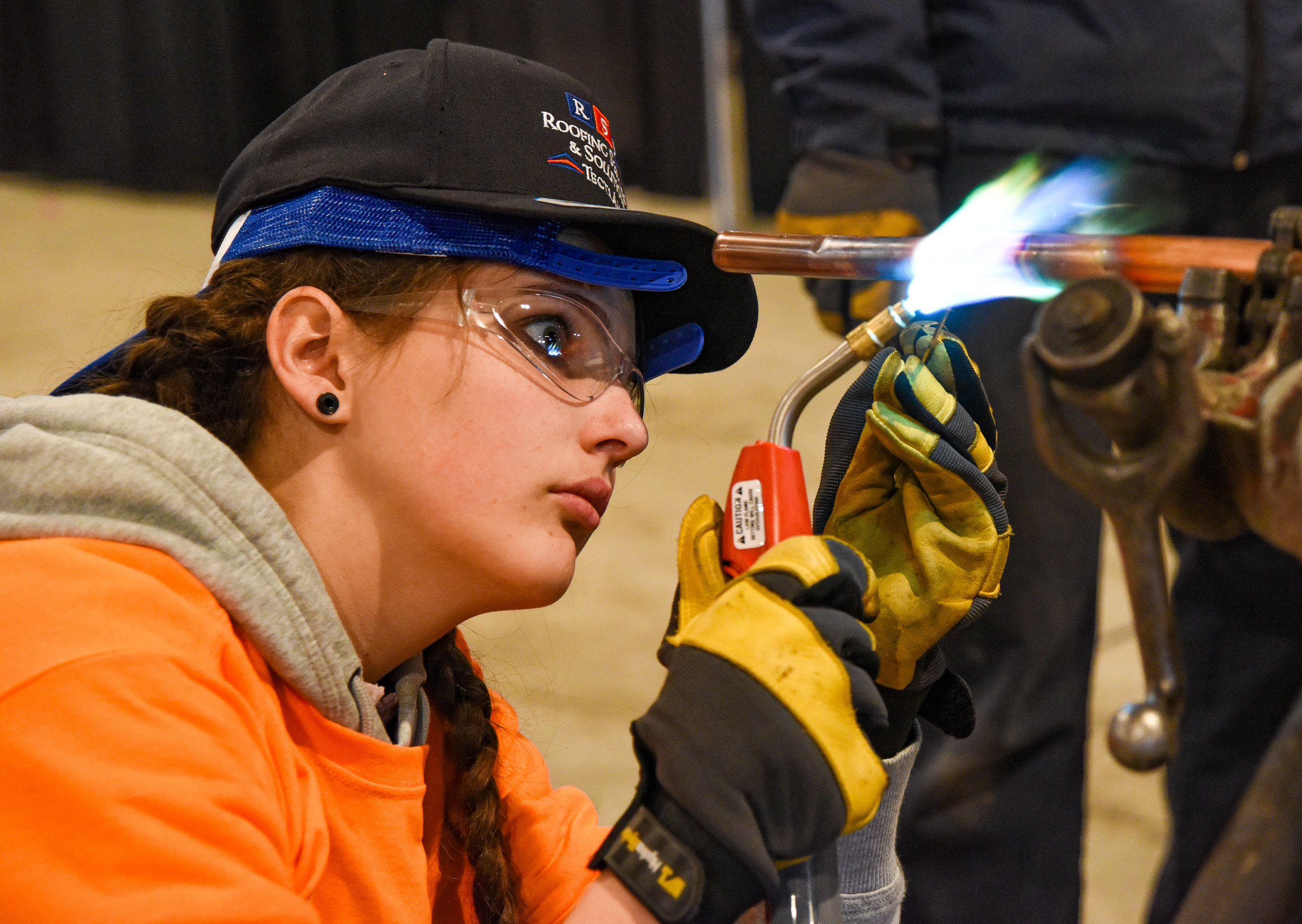 Julie Smith/News Tribune  photo: Ashley Hult takes a turn at brazing two pieces of copper pipe together Tuesday at the Build My Future demonstrations at the Jefferson City Jaycees Cole County Fairgrounds. Hult is a junior at Warrensburg Area Career Center and joined fellow students in the trip to check out career opportunities. With the help of numerous sponsors, Associated General Contractors put on the event that saw over 1,800 high school students tour the grounds. 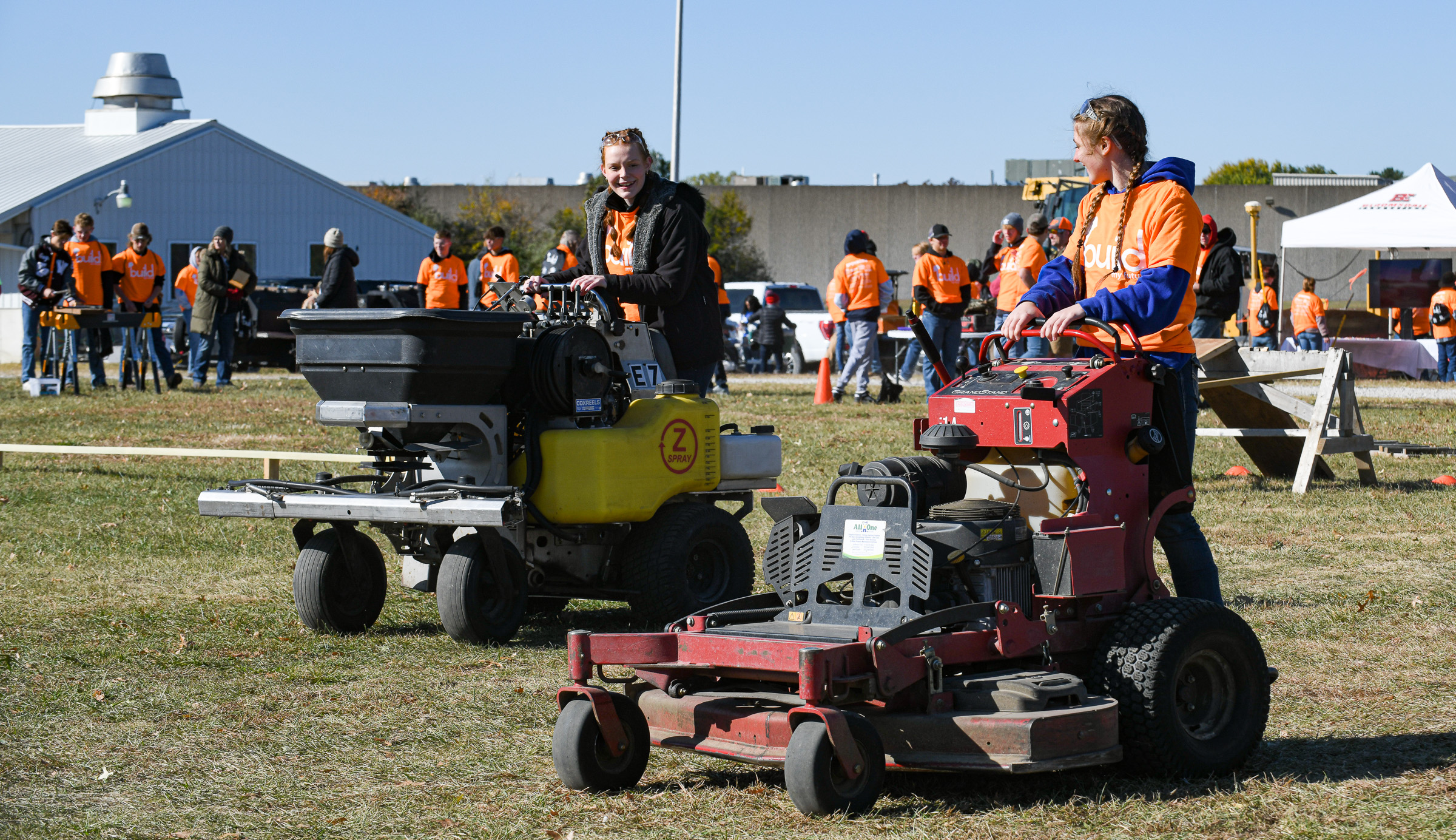 Julie Smith/News Tribune photo: Russellville High School sophomores Candic(sic) Petershagen, right, and Clarissa Jones take a spin on a stand-behind mower and fertilizer spreader, respectively, Tuesday while takin part in the Build My Future event at Jefferson City Jaycees Cole County Fairgrounds. The event, the second one in mid-Missouri, drew over 1,800 high school students from the central Missouri area to be able to see, sit in or on a number of different construction vehicles, several of which students had a chance to operate.