Golf notes: Woods yet to announce if he will join strong Bahamas field 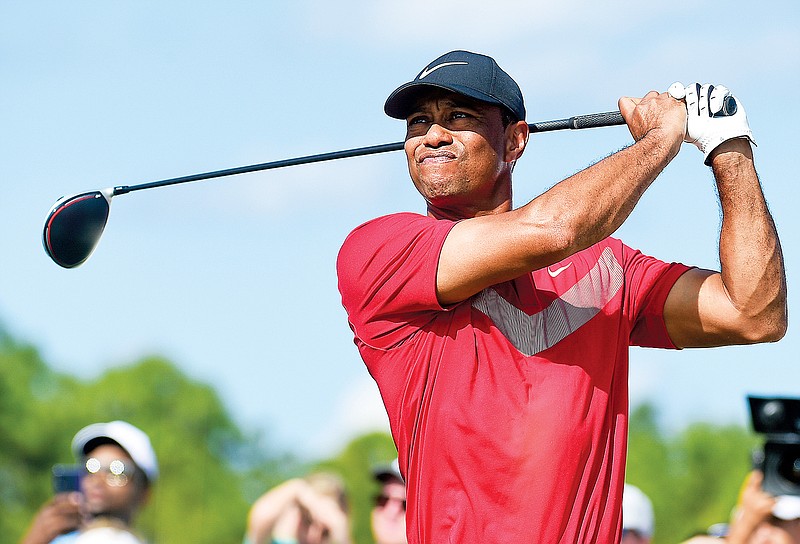 In this Dec. 7, 2019, file photo, Tiger Woods follows his ball at the fourth tee during the final round of the Hero World Challenge in Nassau, Bahamas. (Associated Press)

Tiger Woods has another loaded field for his Hero World Challenge in the Bahamas.

Woods announced 17 players for the 20-man field this week, and all but four are from the top 21 in the world rankings. Still to be announced is whether the player at No. 1,195 in the world -- Woods -- will tee it up at Albany.

Woods saved three spots for tournament exemptions, and it is widely expected he will play for the first time since 2019. He played three majors this year, most recently at the British Open in July.

Woods did not play the Hero World Challenge last year while recovering from his February 2021 car crash that badly injured his right leg, though he caused a big stir when he was seen hitting full shots on the back of the range. He returned two weeks later at the PNC Championship with his son, Charlie.

Among the newcomers to the holiday event are Will Zalatoris, Cameron Young, Sungjae Im, Max Homa and 20-year-old Tom Kim. The only players from the top 21 who chose not to play were Rory McIlroy, Patrick Cantlay and Shane Lowry. British Open champion Cameron Smith is not eligible because he signed with Saudi-backed LIV Golf and this is a PGA Tour-sanctioned event.

The field currently features 10 of the 12 Americans from the Presidents Cup team. Cantlay is not going and the other is Kevin Kisner, who most likely will get one of the tournament exemptions to be announced later.

Three of the five qualified players from the International team who will be in the Bahamas are Im, Kim and Hideki Matsuyama.

The path for 30 players to reach the PGA Tour starts in the Bahamas next year as part of a Korn Ferry Tour schedule that has the same number of tournaments, nearly $8 million more in prize money and a revamped end of the year.

The Korn Ferry Tour released its 2023 schedule this week with changes that already had been in the works, starting with a minimum $1 million purse for the regular season, with $180,000 to the winner.

The change comes at the end of the year.

Instead of 25 players earning PGA Tour cards at the end of the regular season, the Korn Ferry goes to a playoff system similar to the FedEx Cup with increased points and reduced fields after each of the four weeks.

The top 156 players qualify for Albertson Boise Open, with 144 players at the Simmons Bank Open in Tennessee, 120 players advancing to the Nationwide Children’s Hospital Championship in Ohio and the top 75 going to the Korn Ferry Tour Championship in Indiana. All playoff events have $1.5 million purses ($270,000 for the winner).

“I am thrilled with the momentum we’re carrying into this next chapter of our tour’s history,” said Alex Baldwin, who enters her fifth season as Korn Ferry Tour president.

The Korn Ferry Tour previously awarded 25 PGA Tour cards from the regular season and 25 cards from the postseason of fields that were a mix of Korn Ferry and PGA Tour players. Now there will be 30 cards, with at least five cards from a traditional Q-school and 10 cards available to the leading players from the European tour.

As for the Korn Ferry Tour schedule, two Louisiana tournaments and one in Maine are no longer on the schedule. They have been replaced by new tournaments in Chile, Oklahoma and New Jersey.

The Masters is the only major Ryan Fox of New Zealand has yet to play. He made a wager with a couple of friends long ago he would take them to Augusta National if he was ever invited to play. He had no reason to think it might be next year.

Fox was coming off a year in which he had only two top-10 finishes and was No. 213 in the world when it ended.

“So to even be talking about going to the Masters is pretty incredible,” Fox said.

Now he is up to No. 25 after winning the Alfred Dunhill Links Championship for his second title this year, to go along with runner-up finishes in the Soudal Open, Irish Open and Dutch Open.

He would be a lock to finish the year in the top 50 and receive an invitation to the Masters.

“That would be pretty cool to get that in the mail,” Fox said. “Obviously, I would love to keep playing how I’m playing at the end of the year.”

Charley Hull and Mackenzie Hughes won for the first time on the LPGA Tour and PGA Tour the week before Thanksgiving in 2016. Neither won again on the the U.S. tours until last week, Hull at The Ascendant LPGA in Texas and Hughes at the Sanderson Farms Championship in Mississippi. … Jordan Spieth plans to play in the PNC Championship with his father, Shawn. … Three players who began the year outside the top 100 in the world rankings are now among the top 25 -- Cameron Young, Tom Kim and Ryan Fox. … The winner of the Women’s Amateur Latin America will earn a spot in three LPGA majors in 2023 -- the Chevron Championship in Houston, the Women’s British Open in England and the Evian Championship in France. The Women’s Amateur Latin America is Nov. 17-20 in Buenos Aires. … The Jordan Spieth Family Foundation has donated $500,000 to help expand the Children’s Medical Center Plano in Texas. It’s the largest donation Spieth’s foundation has awarded any organization.

Three of the top 10 players in the world are playing this week on three continents. Cameron Smith (No. 3) is in Thailand for LIV Golf, Patrick Cantlay (No. 4) is in Las Vegas on the PGA Tour and Jon Rahm (No. 6) is playing in Spain on the European tour.

“I get bored if I don’t go for pins, and when I get bored, I don’t play as good. If I just go after pins, keep myself on my toes, make a few birdies, I find it interesting and exciting, and that’s when I usually play my best golf.” — Charley Hull.