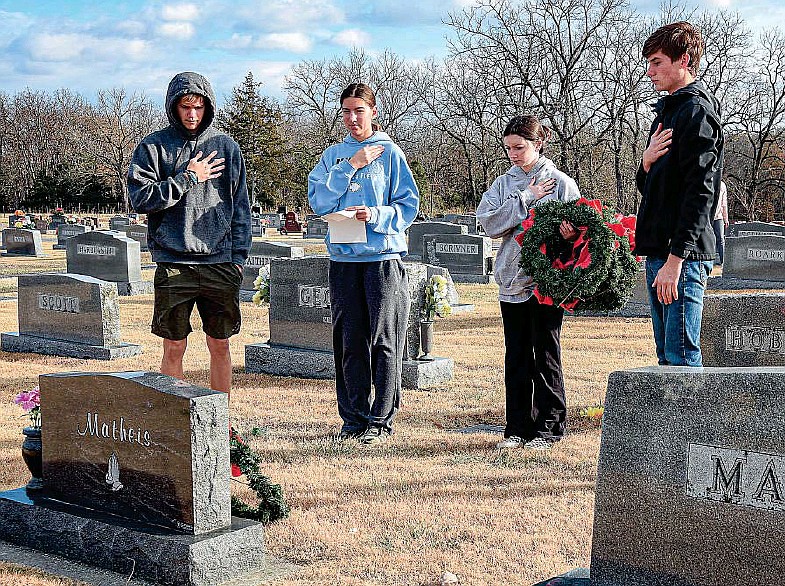 After placing a wreath at this veteran's grave, Ron Bocklage, Amanda Moulton, Kamryn Henggeler and Logan Kleist stand with hand over heart and pause for a moment of silence Tuesday, Nov. 29, 2022, at Enloe Cemetery in Russellville, Mo. (Julie Smith/News Tribune photo)

Russellville High School students honored the sacrifices of veterans Tuesday as they laid wreaths at their graves.

The 39 students representing FFA leadership, National Honor Society and the World War II class partnered with Wreaths for Heroes to honor each of the veterans buried at the cemetery.

"This is a very, very important project. When you're doing the wreaths, think about the sacrifices that these guys and gals have made for our country and that you can be free to do things like this," Don Hentges, who works with Wreaths for Heroes and is the president of the Jefferson City Veterans Council, told the students.

"It's a very serious, reverent time, so please treat it that way," Hentges instructed them.

And so they did.

Students patrolled Enloe Cemetery in groups of four or so, looking for veterans' graves on a list they'd been given. When they found one, they would stake down a wreath in front of the grave, step back, put their hands over their hearts, and say, "Thank you."

Students marked each grave with a penny to indicate that it had been visited.

The World War II class had previously visited to take rubbings of some of the gravestones, and students later looked up some of the veterans buried there to learn their stories.

"They need to know our history, and they need to know that what we have here has been bought with a cost, and people have stepped up to serve to make sure that we are kept safe and we have the privileges that we do," said Denise Crider, teacher of the World War II class.

Junior Jillian Schmidt was one of the students who had participated in the gravestone rubbings in the past.

"I really enjoyed getting to do that. I like to be creative and stuff, and it's amazing to honor our veterans in that way and to display that and show our creativity," she said.

Schmidt said the wreath-laying event is a great way to get involved in honoring veterans.

"Because I feel like, sometimes, as students, we sometimes get so caught up in sports and stuff like that, that we ... forget to do stuff like this. And I just think it's very important to honor our veterans and for the students to realize that they deserve to be honored and they're the reason we are free," she said.

While the occasion is a solemn one, students still enjoyed it.

"I think it's really fun, and it's just good to see and respect our veterans, know our history," junior Hallee Stewart said.

Hentges said he's very proud of the students for helping.

"A lot of people don't realize the sacrifices that were made, and being out here doing this, they're seeing names that they recognize," he said.

Wreaths for Heroes will do a similar wreath laying Saturday, Dec. 10, at the Jefferson City National Cemetery. Those wishing to volunteer should be at the cemetery between 8:15 and 8:30 a.m. Following the wreath laying, there will be a ceremony.