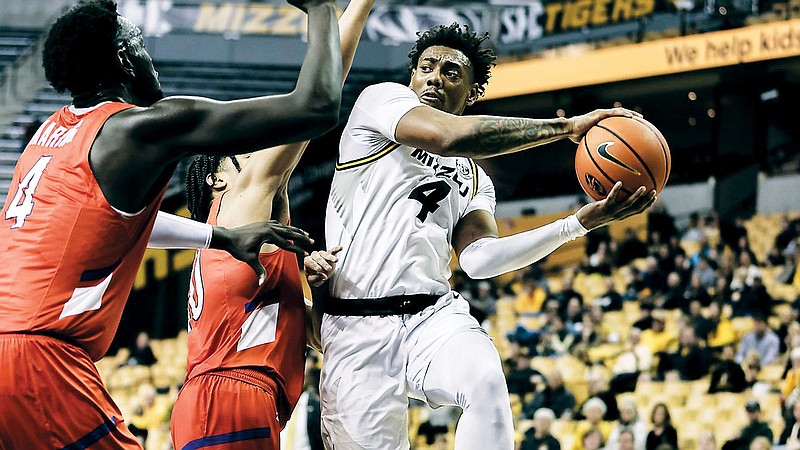 DeAndre Gholston of Missouri looks for a teammate to pass to during Saturday’s game against Houston Christian at Mizzou Arena in Columbia. (Courtesy of Mizzou Athletics)

COLUMBIA -- Unselfish basketball has defined the Missouri Tigers through the beginning of the Dennis Gates coaching era.

The Tigers entered their game Saturday against the Houston Christian Huskies with the highest per-game assist average in the country and set a new season high in a 105-69 win at Mizzou Arena.

Missouri has dished out at least 20 assists in every game, averaging 22.3 for the top spot in the country, then had seven players notch at least two to build a team total of 28 in Saturday’s win.

“I think we have a group of guys who truly get a joy feeling from seeing their teammate succeed,” forward Tre Gomillion said. “I feel like Gates did a great job recruiting guys like that. As soon as we stepped on campus, we wanted to see each other win.”

The assist total helped push Missouri’s offense to a tie for its best performance of the season, matching a 105-80 win Nov. 15 against SIU-Edwardsville.

Missouri’s potent offense got started quickly when Noah Carter grabbed a rebound and scored a putback layup for the first of his 14 points. After the initial miss leading to Carter’s board, the Tigers hit six consecutive shots, ending with a right-wing 3-pointer from reigning SEC player of the week D’Moi Hodge, to jump ahead 16-0. Hodge launched the 3 off an assist from Gomillion, who ended with a co-team-high five.

“That’s scouting report, that’s our guys dialing in,” Gates said. “The experience we have game by game continuing to get better.”

The Tigers couldn’t miss, continuing their hot streak to a 9-for-9 stretch following the game-opening miss and creating a 23-3 lead with 13:50 left in the first half.

Andrew King hit a second-chance layup for Houston Christian, getting the Huskies their first made field goal with 12:40 left in the first half after an 0-for-7 start.

King connected on a layup off a turnover for another two of his 13 points to cut the Missouri lead as close as 34-20 with the Huskies taking the lid off the rim for a 5-for-5 stretch.

The Tigers used a 15-6 run, powered by seven consecutive points from DeAndre Gholston who scored 19 first-half points to build a game-high 22, to take a 49-26 lead with 2:39 left before halftime.

“I think it started on the defensive end,” Gholston said. “I picked my intensity up and just kept running and my teammates found me.”

“He hasn’t played as well as he wanted to on the offensive end, but defensively he’s been as consistent as anyone,” Gates said. “To have a fifth guy out of seven games lead us in scoring, it says a lot.”

“You see we get a lot of deflections, a lot of steals, those create easy fast-break points,” Gholston said. “That’s a good way to keep our shooting percentage high as a team.”

Along with their prolific passing numbers, the Tigers entered the game second in the country with 13.5 steals per game and fifth in forcing turnovers with 21.8.

Missouri’s defense forced 23 turnovers Saturday with 16 steals. Those turnovers led to a 33-10 scoring advantage for the Tigers off possession changes. Missouri also had a major advantage in points in the paint with a 62-34 edge and scored 26 fast-break points to Houston Christian’s 5.

Houston Christian (1-6) shot 25-of-56 (44.6 percent) from the field, making them the first of Missouri’s past five opponents to reach 40 percent or higher.

Missouri (7-0) will hit the road for the first time this season when the Tigers play at 7 p.m. Tuesday at Wichita State (4-2).