Cub and Boy Scouts use ‘Campsgiving’ to further forge friendships; ‘Calling it a family sounds corny, but you are really connected’ 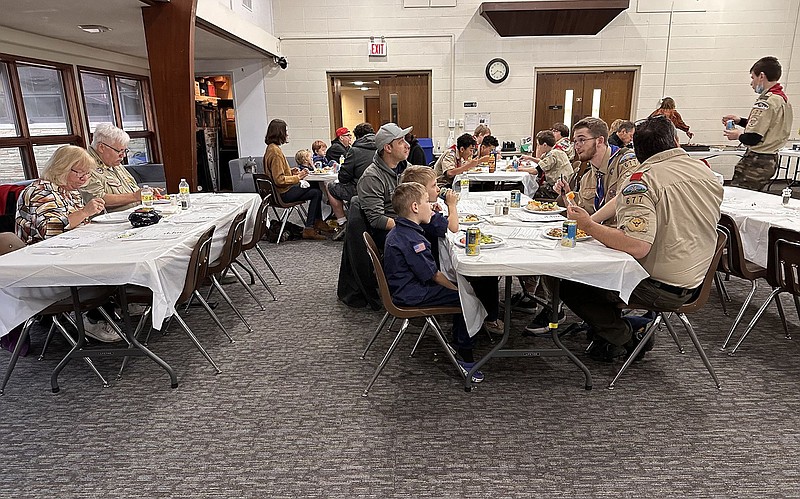 GURNEE, Ill. -- Scouting is fun. So say the young members of Gurnee Pack and Troop 677, who recently celebrated Thanksgiving early at the Gurnee Community Church, in suburban Chicago, where they hold weekly meetings.

The annual event, called "Campsgiving," was started by Cub and Scoutmaster Dan Leslie before the pandemic.

While normally held outdoors during a camping trip, this year Campsgiving was celebrated Nov. 12 inside, but with the same goal of breaking bread together with friends and creating a feeling of camaraderie, Leslie said.

Troop and pack members, who range in ages from 5-18, gathered in the church kitchen preparing mashed potatoes and stuffing. Invited families were asked to bring side dishes to eat with the turkey.

The children joked and laughed when making the meals, and continued their joking and conversing when seated for dinner.

"I like eating," said the youngest and newest pack member, 5-year-old Theo Lynch.

Soon after the eating portion of the event ended, the fun continued with games and prizes, but not before recognizing members for earning new badges and excellent sales in their fundraising.

On a TV screen above a makeshift stage, each one of the Scouts' photos appeared as their earned badges were called out -- from forestry, cooking and pioneering to space exploration and environmental science.

Leslie said he enjoys providing children opportunities for experiences that aren't in front of a computer.

"We teach skills that schools aren't teaching anymore, like how to manage their finances and cooking," he said. "We teach responsibility."

For Leslie, Scouting has been a lifelong pursuit. He joined a Boy Scout group in Waukegan when he was in second grade. He's been in it for 45 years.

Now, through his leadership and events like Campsgiving, he's hoping to pass down lessons to those willing to learn. But that's not all.

"Part of Scouting is the memories," Leslie said.

Friends he met in his Scout group when he was a kid are still his friends to this day. He said shared experiences are what built and fortified those friendships.

"Calling it a family sounds corny, but you are really connected," the 14-year old said. "It's an experience that I don't think you can get anywhere else."

He said he's faced some of his fears alongside his fellow Scout members and those moments he won't soon forget. For example, he and another scout who were afraid of heights hiked a mountain together last year.

"It was really scary to me," he said.

But afterward on a different trip where there was rock climbing, John said he felt less afraid and more confident to participate. He doesn't think he would have faced that fear alone, but with his friends it was much easier.

Shannon Lynch, a mother of four Scouts and the committee chair for the pack, which is the younger group, said the reason why she and her husband wanted their children to join was so they could get to know other children in the community.

She's happy her boys, who are 5, 8, 10 and 11, are also gaining a sense of responsibility and learning different life skills.

"They know how to build a campfire now, make food and about cyber safety," Lynch said. "They get to be creative."

For the event, the Scouts made up and performed a comedy skit. They often make up songs and games, too.

Leslie cites a 2012 Baylor University study titled, "Merit Beyond the Badge" in which research indicates that those who have been Eagle Scouts show high leadership skills and have a positive influence on society.

For an example, he said, look no further than 14-year-old Keith Jackson, who was recognized by the Gurnee Park Board in October for his Eagle Scout project.

At Christine Thompson Park, Jackson built a Gaga pit so kids in the district can play the high-energy, fast-paced game of Gaga Ball, a game that resembles dodge ball.

The project took him six months.

Chun Choi of Wheeling is the grandmother of Keith and his younger brother Walter, who is also in the troop.

Choi said through Scouting her grandsons have become involved in their community. She supports them as much as possible by attending their family events, such as Campsgiving.

"I like to see them having fun with their friends, and being good role models for the younger kids," she said.

Campsgiving ended with all of the Scouts helping the adults clear tables and clean the kitchen, leaving the hall as they had found it.

Currently, Gurnee Troop 677 is looking for girls in grades 6-8 to start a girl group, and provide local girls with the same opportunities for learning and building relationships.

Boys are also welcome to join the existing groups. 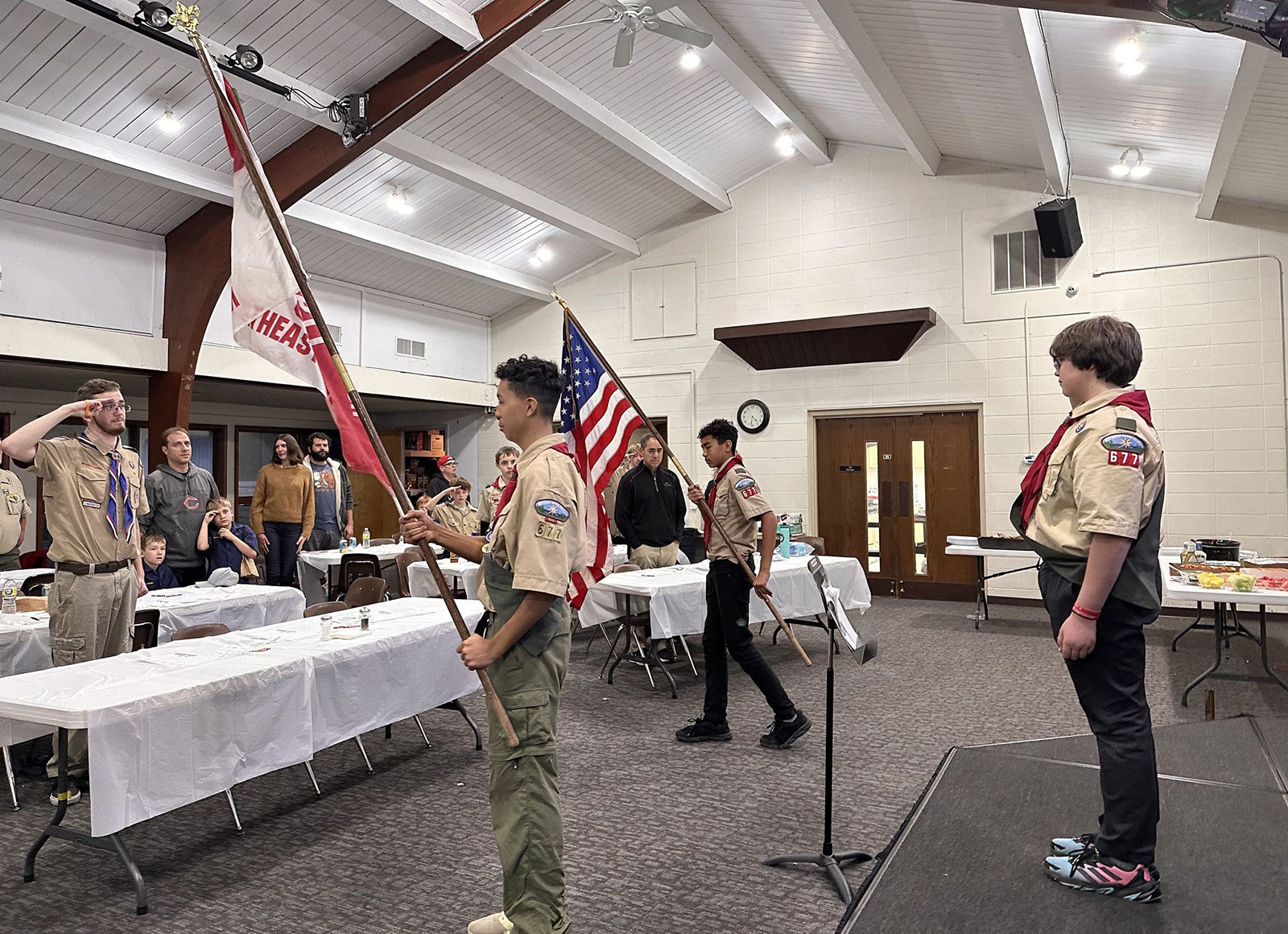 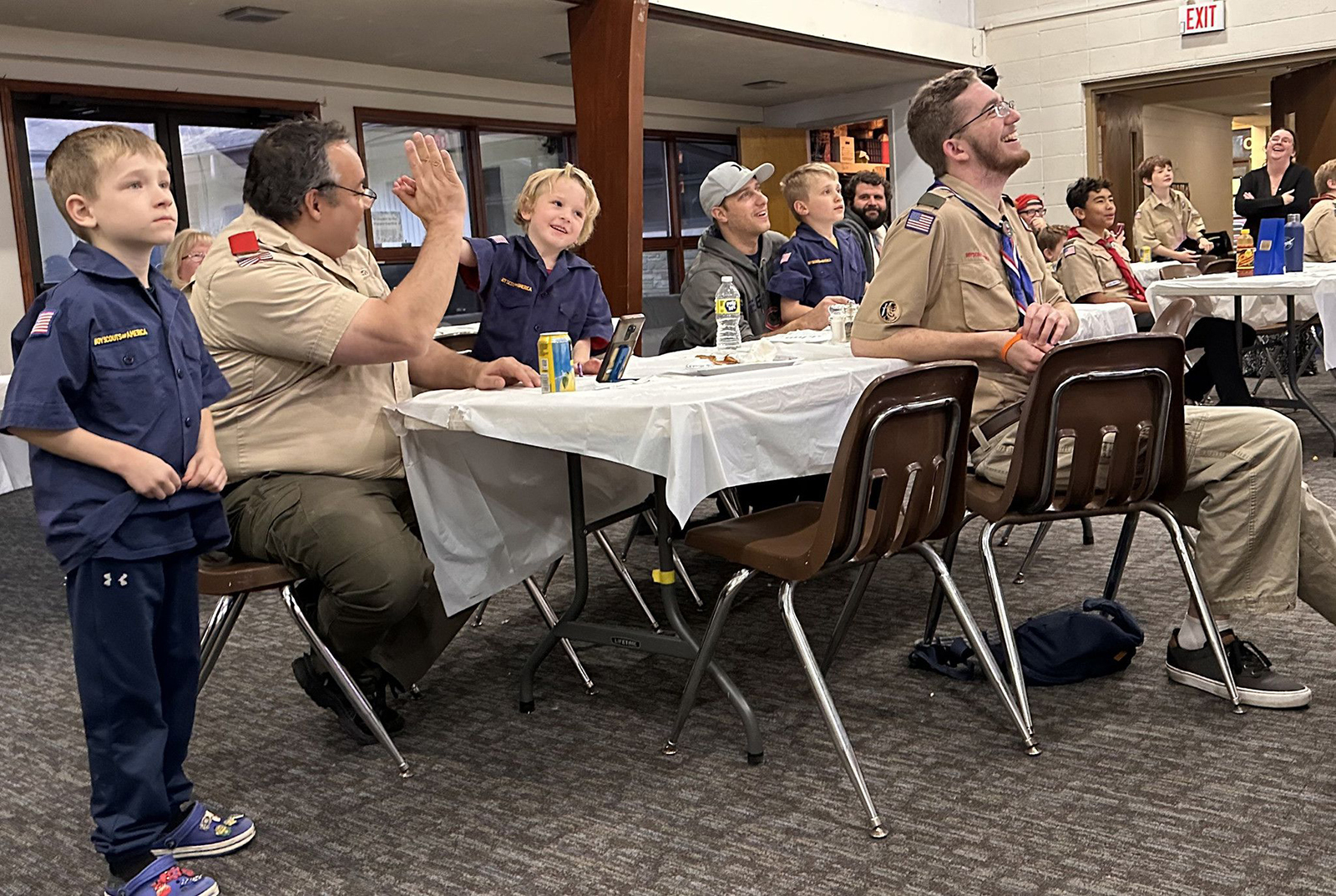 Print Headline: Cub and Boy Scouts use ‘Campsgiving’ to further forge friendships; ‘Calling it a family sounds corny, but you are really connected’