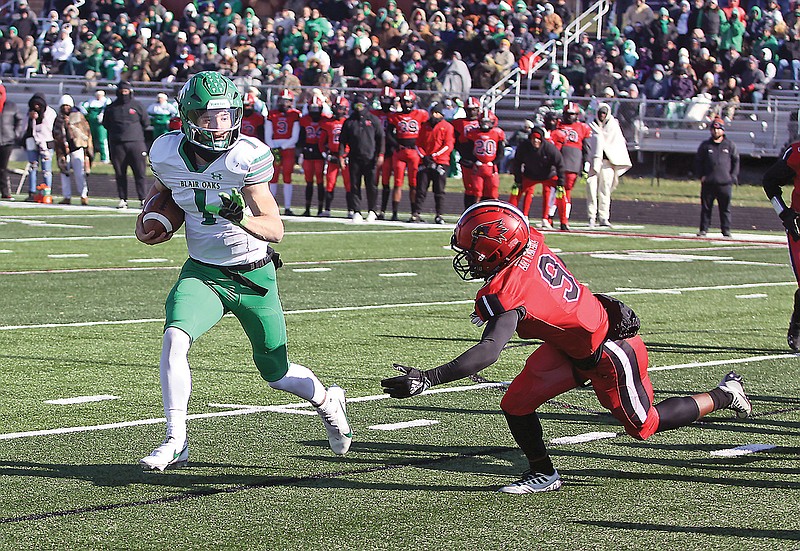 The top two scoring offenses in Class 2 football will meet this afternoon in the state semifinals, as the Blair Oaks Falcons travel to play the Bowling Green Bobcats. Kickoff is at 1 p.m. at Bowling Green High School.

Sixth-ranked Bowling Green tops the list of 54 Class 2 programs by averaging 66.0 points per game. Top-ranked Blair Oaks is second on that list with 56.3 points per game.

No other Class 2 team averaged more than 50 points per game this season.

“It’s a little bit similar to what I’ve said about our offense,” Blair Oaks coach Ted LePage said. “It’s a confidence that, when we touch the ball, we’re scoring.”

Bowling Green (12-0) advanced to the semifinals with a 30-22 win against second-ranked Lafayette County in last Saturday’s quarterfinal round at Higginsville. The Bobcats scored at least 60 points in every regular-season contest, including a season-high 83 points in Week 8 against Wright City.

“Utter domination, there’s no other word for it,” LePage said. “They just dominated their opponents.”

The 30 points last week was by far a season-low for the Bobcats, but they were able to avenge last season’s 52-32 quarterfinal loss to the Huskers. It’s the only loss Bowling Green has had since the start of the 2021 season.

“You’re going to have to play a very clean football game to beat this team,” LePage said. “They’re so good on offense and so good on defense.”

“He runs really well behind his pads,” LePage said. “He’s a very good power runner, but he’s also got the speed to break it loose on any play. He’s well-accomplished, he’s got I don’t know how many thousands of rushing yards in his high school career.

“He’s as good as any running back we’ve seen this year.”

The other running back in the Bobcats’ veer offense, junior Bleyne Bryant (6-2, 190), accounted for Bowling Green’s other two touchdowns last weekend, one rushing and one receiving.

“Offensively, they’re as good at running the split back as you’re going to see,” LePage said. “Webb City probably runs it better, but this team is really refined at it.”

Senior quarterback Dylan Dalton has shown an ability to throw the ball as well. All three of his passing attempts went for 154 yards and three touchdowns in the Bobcats’ 57-8 win against Hallsville in the District 7 championship game.

“They’re really good at their offensive tackle position, their tackles get a great push. If you want to run a split-back veer, you’ve got to get that push,” LePage said. “Their tight ends are extremely long and athletic. Their three interior players are big, they’re big all the way across the board.

“They’re just going to line up and bring it at you.”

Bowling Green’s defense has been just as dominant as the offense, holding opponents to 8.9 points per game. Only Richmond had a better scoring defense in Class 2 at 8.8 points allowed per game.

LePage noted as many as 10 starters on offense will turn around and play defense for the Bobcats.

“They don’t back down, they never stop, they keep going,” he said.

Leading Bowling Green’s 4-2 defense is junior outside linebacker Gunner Bryant (6-3, 210), who is the Eastern Missouri Conference defensive player of the year.

“When they see a team that spreads them out, they go to more of a 4-1 box,” LePage said. “… But they’re really going to try to attack off the edge. They do a very good job of bringing pressure. If they feel like they’re in trouble, they’re going to bring seven and they’re going to get you.”

Blair Oaks (12-0) is coming off a 42-0 win in last Saturday’s quarterfinal game against Lift for Life, a team that scored 66 points the previous week in the district championship game against New Madrid County Central.

“Our defense was extraordinary,” LePage said. “Everybody says, ‘You gave up 9 yards a carry,’ but that was a team that was about as explosive as we’ve seen.

“They would get a good run, but they never got the big run. I think that was very, very telling in the game.”

The winner of today’s game advances to the Class 2 state championship game, which will be played at 3 p.m. next Friday at Faurot Field in Columbia.

“It’s going to be a fun football game,” LePage said.

Notes: This is the first meeting between Blair Oaks and Bowling Green. The Bobcats are 1-1 all-time in state semifinal games, while the Falcons have a 6-4 record in the semifinal round. … The Falcons are allowing 12.0 points per game, which ranks seventh in Class 2. … Bowling Green has a grass field, making this the third time Blair Oaks has played on a grass surface this season (Eldon and Southern Boone). … Linebacker Brady Kerperin led the Falcons with 17 total tackles in the win against Lift for Life. … Bowling Green had 10 offensive players named to its all-conference team, while Blair Oaks had 10 defensive players selected all-conference in the Tri-County Conference. … The winner of today’s game will face the winner of the other semifinal game between third-ranked Lamar (11-1) and fourth-ranked Seneca (11-1), a game that will be played at Lamar. In their regular-season meeting, Seneca won 36-33 at home against Lamar.