“Calls of the Wild” come to Blair Oaks Elementary gym 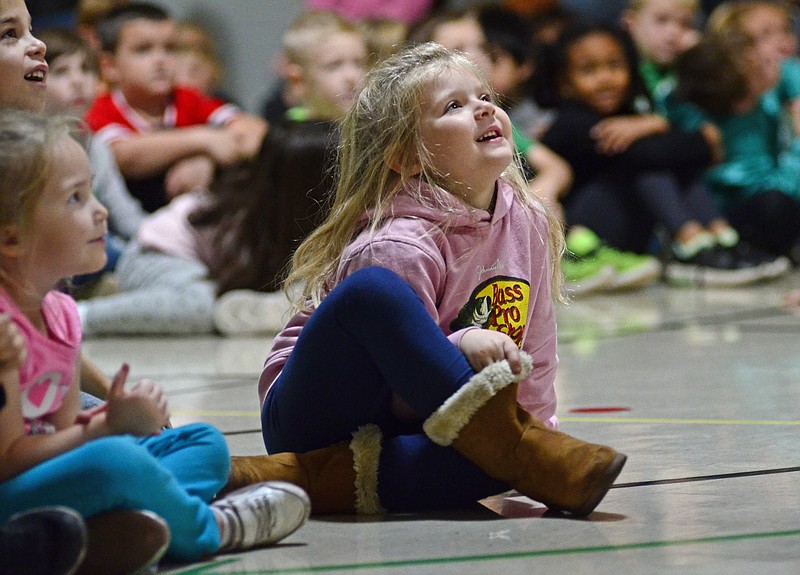 Blair Oaks Elementary School students heard the sounds of the outdoors inside their gymnasium Tuesday.

Ralph Duren presented "Calls of the Wild," introducing students to a range of animal calls that he produces solely with his mouth and sharing stories about the outdoors and Missouri wildlife.

"I don't know a lot of other languages and a lot of other words -- like some people can speak five or six or seven other foreign languages. I have enough trouble 'cause English has so many words, right? But animals have just a very few words," Duren told the children.

He proceeded to introduce students to bird calls, like those of the blue jay, cardinal, common yellowthroat and killdeer. He also taught them a few -- with one condition.

He had each student raise a hand and repeat after him: "I promise I will not practice the great blue heron (call) until I get home."

Duren said he didn't want to drive the teachers crazy.

"This is the most obnoxious sounding bird that I've ever heard," he said.

Duren grew up on a farm, where he said he would "talk" to animals, and he began calling turkeys at age 6 when he started hunting. One year, he entered a turkey calling contest, and when a teacher got word of how he had performed, he got to do a demonstration for his class.

"After that, on a regular basis, kids would say, 'Hey, make that sound,'" Duren said.

Since then, he's done programs for the Conservation Department and done presentations at schools all over.

"So I've been doing programs since the third grade," he said with a laugh.

Duren taught children the sounds they might hear in a marsh or wetland. The owls are some of his favorites.

Duren encouraged students to get outside and try a few animal calls themselves.

"So this weekend, the weather's going to be nice," he said. "Don't stay in and play video games and watch TV ... but go outside and listen and see how many animals you can hear because there are over 300 kinds of birds in Missouri. Just birds. All you've got to do is repeat what they're saying."

Eileen Wisniowicz/News Tribune photo: From left, Brace Baker, Ruby Meloy, and Kymber Mason, preschool, listen to the many animal noises made by Ralph Duren on Tuesday, Nov. 22, 2022 at Blair Oaks Elementary School. Students were taught about different animals in their backyards and across Missouri, and how to recognize the animal based on the sounds they make.

Eileen Wisniowicz/News Tribune photo: Ralph Duren leans over as he imitates a killdeer's call for students at Blair Oaks Elementary on Tuesday, Nov. 22, 2022. Duren was invited to give an animal sounds presentation to students; imitating everything from birds to mooses.

Eileen Wisniowicz/News Tribune photo: Brace Baker practices a call that Ralph Duren teaches students at Blair Oaks Elementary School on Tuesday, Nov. 22, 2022. Duren imitated many different animal sounds and invited students to try it out themselves. The result were roars that could be heard down the hallways of the school.

Eileen Wisniowicz/News Tribune photo: Stella Barker, preschool, laughs during a particularly funny animal imitation made by Ralph Duren on Tuesday, Nov. 22, 2022 at Blair Oaks Elementary School. Duren made all sorts of animal noises as he taught students about the different animals they could find in their own backyards.

Eileen Wisniowicz/News Tribune photo: Isla Young, 2nd grade, covers her ears as Ralph Duren erupts into a screeching bird call on Tuesday, Nov. 22, 2022 at Blair Oaks Elementary School. Duren imitates different animal sounds and was invited to teach students about wildlife they can find in their own backyards.
More News