Kelce continues to star amid rash of injuries on Chiefs 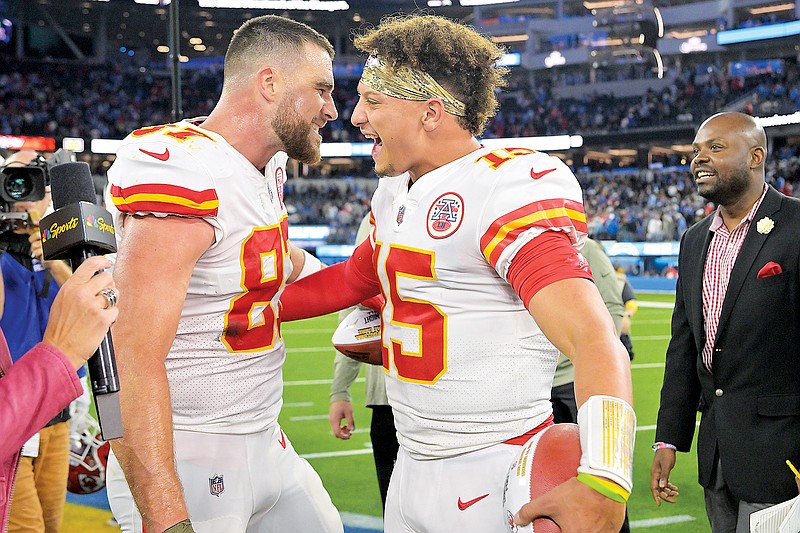 KANSAS CITY -- Mecole Hardman was watching his Kansas City Chiefs visit the Los Angeles Chargers from home on Sunday night when he tweeted a picture showing the injured wide receiver’s shattered TV screen and asking how the game turned out.

Thanks to Travis Kelce, the Chiefs rallied for another win against their AFC West rivals.

Of everything the three-time All-Pro tight end has accomplished during his decade in the NFL -- the record-setting yardage, catches and touchdowns -- the most impressive thing may be this: He’s always available. And with Hardman out with an abdominal injury, JuJu Smith-Schuster recovering from a concussion and newly acquired wide receiver Kadarius Toney now dealing with a hamstring injury, Kelce’s ability to continually show up on game days is as valuable as ever.

“I think what is special about him is he just competes,” Patrick Mahomes said after the 30-27 victory, which was assured on his TD throw to Kelce with 31 seconds left in the game. “At the end of the day, he’s just going to keep fighting until the very end. When you see that, not only is it impressive for him but it gets other guys going.”

Kelce finished with six catches for 115 yards and three touchdowns, the second time in his career he has caught at least that many passes in the end zone. And the final one Sunday night was easily the most impressive.

Matched up one-on-one with 2018 All-Pro safety Derwin James Jr., the deceptively quick tight end beat him off the line of scrimmage, cut across the field and hauled in Mahomes’ pass in stride, then won the race to the end zone.

His celebratory spike would have hit about 90 mph on the radar gun.

It was the 33rd game of at least 100 yards receiving for Kelce, sending him past Rob Gronkowski for the most by an NFL tight end. And Mahomes and Kelce have now connected on 45 touchdown catches, the second most between a quarterback and wide receiver in franchise history; Len Dawson and Otis Taylor had 50 of them.

“You’d like it to last forever,” Chiefs coach Andy Reid said, “but these guys grow old and it’s not. So what I do is try to enjoy every minute of it. Every play. Their chemistry is ridiculous. You know coming into this game that they had a plan for Kelce, and he and Pat were able to work through it and make some nice things happen.”

• What's working: The Chiefs have found some balance with Isiah Pacheco in the run game. He had 107 yards on just 15 carries in his fourth consecutive start, the first time Kansas City has had a 100-yard rusher since Clyde Edwards-Helaire on Oct. 3, 2021.

• What needs help: Chiefs trainer Rick Burkholder probably needs as much help as he can get right now. The injuries to Hardman, Smith-Schuster and Toney will keep him busy enough. But the Chiefs also lost Edwards-Helaire to a high ankle sprain, safety Juan Thornhill to a strained calf and cornerback Jaylen Watson to a hand injury.

• Stock up: Chiefs linebacker Willie Gay Jr. has clearly overcome the rust from a four-game suspension for violating the NFL’s personal conduct policy. He’s had sacks in back-to-back games along with 19 tackles and three tackles for loss.

• Stock down: Edwards-Helaire had already lost the starting job to Pacheco and now could be out for a while with an injury. The other running back active Sunday night, Jerick McKinnon, had a late fumble that could have cost Kansas City the game.

• Injuries: Hardman won’t be back for at least three more games. Smith-Schuster and Toney could be out for at least one more game, if not more. And injuries to Thornhill and Watson deplete what has been a generally solid secondary.

• Key number: 15 -- Mahomes has thrown at least one TD pass in that many consecutive games, tying Elvis Grbac for the second-longest streak in Chiefs history. Mahomes owns the longest at 31 games from 2019-21.

• Next steps: The Chiefs face the Rams on Sunday at Arrowhead Stadium.