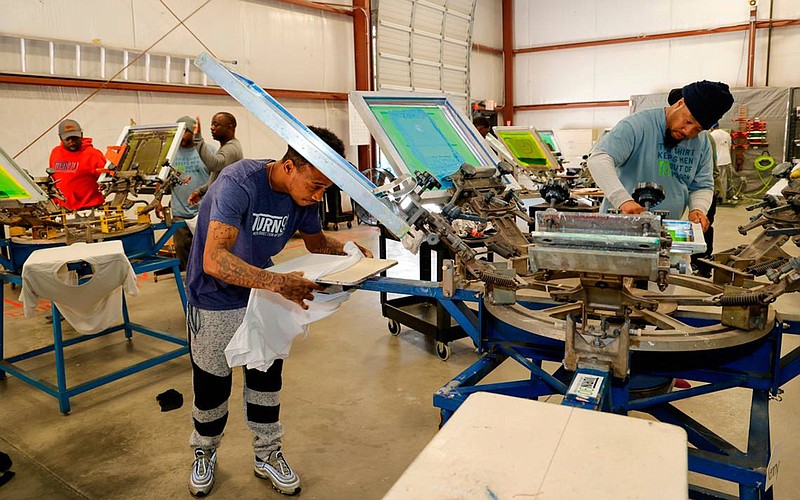 COLUMBIA, S.C. -- Terrance Ferrell never wanted to come back to Columbia. His memory of the capital city was of holidays spent with his grandmother visiting relatives at prisons up and down Broad River Road.

Soon, Ferrell would come to know those prisons from the inside.

But after two decades in and out of jail and prison, Columbia is the setting of Ferrell's new chapter. It's also the home for the second location of Turn90, the nonprofit that Ferrell credits with turning his life around and where he's now the print shop manager.

"It's about the best thing that ever happened to me," said Ferrell, who runs the nonprofit's production line that produces hundreds of hand-printed shirts a day.

The nonprofit, which combines an evidence-based cognitive behavioral therapy (CBT) curriculum and transitional employment for formerly incarcerated men, celebrated its first year in Columbia on Oct. 27.

Since opening in Columbia, the Charleston-based nonprofit has provided transitional employment in its T-shirt printing business to 75 men and graduated 60 of them into full-time employment, according to founder Amy Barch. Graduates from the program have gone on to work for Urban Electric, a Charleston-based lighting manufacturer, the cities of Charleston and Columbia, and in distribution jobs at companies like Walmart and Dominoes.

Turn90 began in 2012 as Turning Leaf in Charleston. But Barch knew that it could grow to help more people. "You just don't know, can the magic happen again?" Barch said. But "the program has played out beautifully."

"Programs like Turn90 are essential to helping people reenter society safely, which in turn leads to public safety," said Bryan Stirling, director of the state Department of Corrections. "We believe in giving real second chances, and we are grateful for the partnership with Turn90."

About half of the program's 12 fulltime employees, including Ferrell, are graduates of the program. "I'm just like these guys, I've just been out a little longer," said Aulzue "Blue" Fields, a peer specialist and 2018 graduate of the program.

Turn90 provides what it describes as "wraparound" services. At its core is a comprehensive CBT curriculum, which is paired with job training and transitional work in the nonprofit's T-shirt printing shop. The group also provides support services, helping men making the transition out of prison find housing, get identification, and access government services. The goal is to provide graduates with life skills as they enter full-time employment with a living wage and benefits.

"They're definitely helping fill the gap (in services)," said Columbia Mayor Daniel Rickenmann, who added the city had just ordered shirts from Turn90 for a recent event. "We've done some projects with them and we're really looking forward to doing more."

In 2019, Ferrell had just been released from his second five-year stretch in prison for drug charges, and he decided to give himself two days to find a legitimate job.

"I could tell myself I tried," Ferrell said, fully expecting that he would fall back into the only life he'd known how to live.

"I was in the street since I was knee high," said Ferrell, who remembered how he used to fetch drugs stashed underneath cars for some of his relatives. After his mother was sent to prison for manslaughter, he was mostly raised by his grandmother, a former bootlegger who ran an illegal lottery. She taught him how to pour liquor and write numbers.

"I got off at the Greyhound bus station and I had a guy meet me there with drugs," said Ferrell. "It's an addiction, because you go right back to it."

Over the years he accumulated more arrests, but most were tied to the irresistible appeal of selling drugs, he said. Ferrell never used drugs himself, but a drug user who worked for him once said he had the same look in his eyes as an addict when meticulously unpacking a new shipment of drugs.

"All I knew was how to hustle, how to survive," said Ferrell. "I thought I would live a life of crime until I died."

And getting out of that life wasn't easy. While waiting in line at a job fair, Ferrell remembers an announcement telling anyone with a felony to get out of the line. So when his two days of searching for a job were up, Ferrell was ready to fall back into what he knew. But a friend encouraged him to call Turn90, just to hear what they had to say.

Soon he was undergoing an assessment at their Charleston office, where Ferrell laid out some of a life story that had disqualified from other jobs.

"You're perfect," Turn90 told him. They wanted him to start right away.

He didn't know it at the time, but Turn90 was built for people like Ferrell. The program specializes in helping repeat offenders without addiction issues -- men who often never learned the emotional skills to hold a 9-5 job.

This was the gap Barch set out to fill when she launched the organization, which was conceived as "essentially just a CBT program with work placement," Barch said.

"I use the science to drive my work," said Barch, and "the science really points to CBT as the best way to correct chronic and persistent issues."

CBT has consistently been found to be among the most effective tools for reducing recidivism. A 2011 study by the National Institute of Justice concluded that CBT "reduces recidivism among both juvenile and adult offenders."

At its heart, Turn90 is still built around core CBT principles that help its students and eventually its graduates manage their emotions and make better decisions. When Ferrell first read through the curriculum, he found himself laughing at how accurate it was. The lessons were describing the exact feelings and sensations he remembered before committing a crime.

Many of the students connect deeply with the lessons. On the wall of the Columbia print shop, students have stenciled key words from some of the 25 CBT lessons they work through.

"(The students) are their own individual experts in their needs," Blue said. Many struggle with impulsivity, and making bad decisions based off of emotions. Much of the work, Blue said, was teaching Turn90's students to "slow yourself."

The program is rigorous. At a minimum, it takes four months to complete, but many students stay longer. They work through the curriculum in the morning and receive an hourly wage from 9 to 5, including the hours they spend in class. For the rest of the day they work in the print shop, building their skills while churning out T-shirts on silkscreen presses.

While the T-shirt printing business helps the organization to be self-sustaining, it also provides a supportive, structured environment for students to practice the kinds of unspoken workplace skills like communication and conflict resolution that they missed after years, sometimes decades, of incarceration. They put in practice the CBT principles they have been taught and practice in conversation and roleplay, helping them to break antisocial patterns of behavior that have held them back.

It's a place for the men to practice levelling up their thinking, as Ferrell likes to say, but "that classroom is the most important thing," Ferrell said.

Opening the Columbia location has had it's challenges. At first, it didn't have the same kind of connections as the Charleston program, and at the start it sometimes struggled to have enough print shop work to keep all of the students busy.

But on a Tuesday morning last month, the shop is bustling. Music plays from speakers as Ferrell precisely sets up workstations to print an order of T-shirts for the Holy Smokes BBQ festival. Blue gives out high fives before his next class and freshly-printed tote bags are rolling off a heated conveyor belt that's used to cure the wet ink.

Another location in the Upstate is in the works, and Barch is focused on reimagining the business portion to ensure that it's scalable. They've begun providing some services inside of Manning Reentry/Work Release Center, which houses men who are about to be released from prison.

"At this point my entire goal is that the program outlasts me," Barch said. For her, the organization's greatest accomplishment will always be the second location -- it was proof that the seeds of what she had cultivated could be spread and grown.

Now, Ferrell says that when he drives around Columbia he appreciates the city. He likes the elevated highways that give him the feeling that he is cruising above the trees and the river far below. 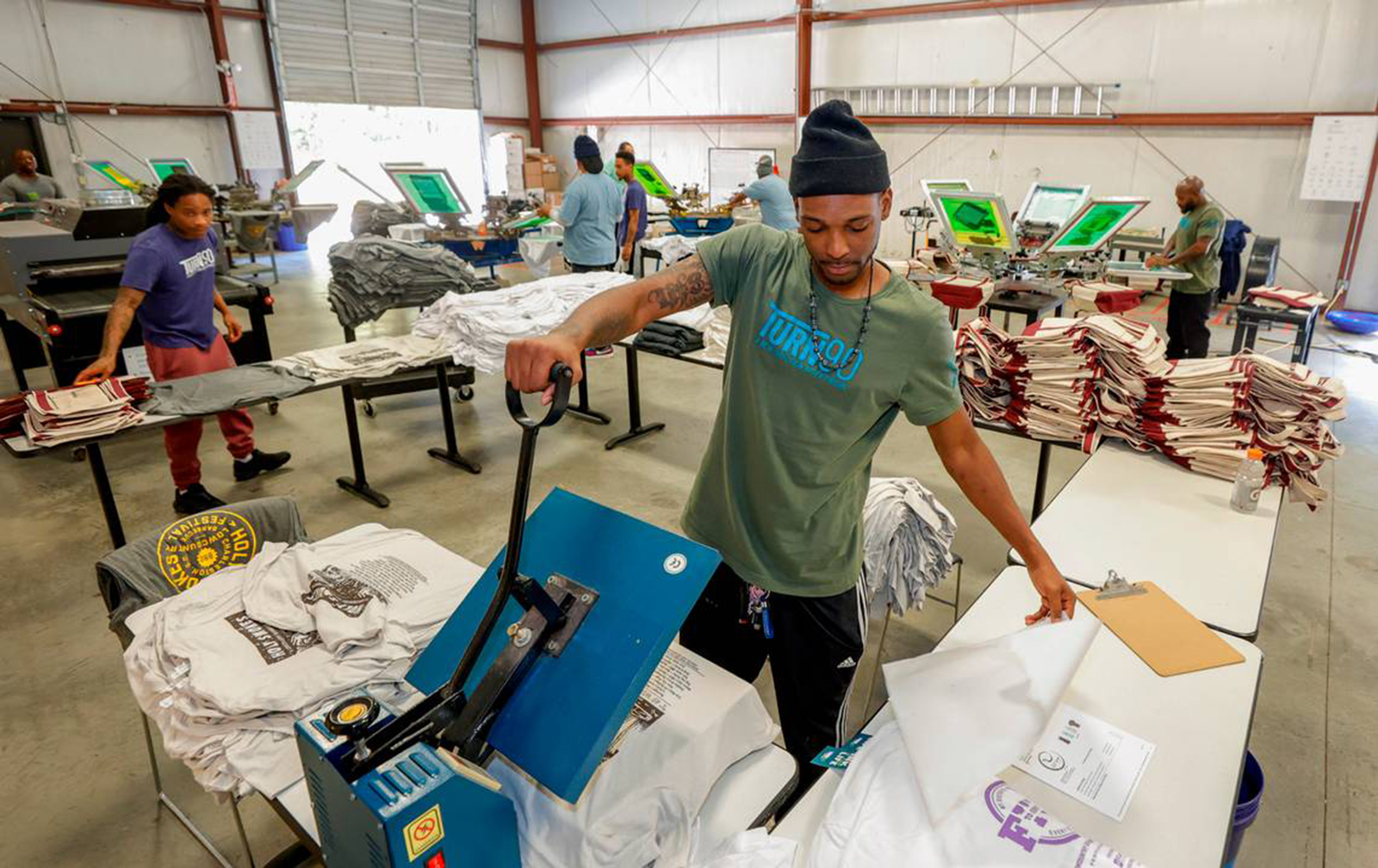 Patrick Spigner has been working the Turn 90 program for about a month after being incarcerated for 12 years and nine months. He says the program is invaluable integrate back into society. Turn 90 helps with the reentry process by helping formerly incarcerated men with life skills. (Tracy Glantz/The Island Packet/TNS)