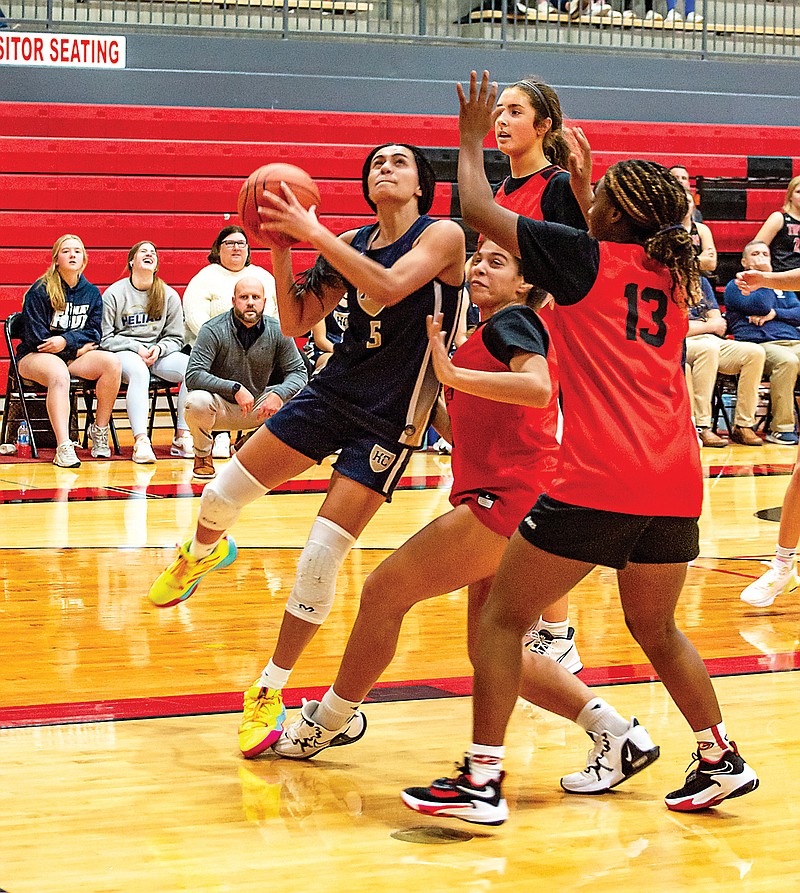 Claire Manns of Helias dribbles around the Jefferson City defense toward the basket during Thursday's Jamboree at Fleming Fieldhouse. (Ken Barnes/News Tribune)

The best thing about Thursday night was the opportunity to play against somebody else.

And that somebody else was pretty good.

“We’re grateful they all came.”

Tipton relished the chance to take on the bigger schools

“When you go to a Jamboree and you get to play against two teams that have Division I players, that can only help you.”

In the Jamboree format, each team faced the other three in a pair of six-minute periods.

Tipton, the smallest school, may have had the best night. The Lady Cardinals went 1-0-1 against both Jefferson City and Helias, sandwiched around a sweep of Blair Oaks.

“We took care of business most of the night,” Culpepper said.

Culpepper thought the Lady Cardinals played their best basketball in the final scrimmage against Helias. The teams played to a tie at 13 in the first period, before Tipton outscored Helias 9-8 in the second.

“We had some defensive breakdowns, there were some things they did that we haven’t worked against in practice,” Culpepper said. “But you’re not ready to play for a Final Four or a state championship yet We know there are things we have to work on. We didn’t do a great job of defending at times against Helias, but we can learn from that. It’s preseason basketball.”

Tipton will open the season Saturday against Ozark in the Rolla Shootout.

Helias also split in action against Jefferson City after sweeping Blair Oaks to start its night.

“I don’t think we played to our potential, but most Jamborees are like that,” Wiggans said. “You’ve got some jitters playing against somebody else for the first time.”

Helias, coming off a Final Four appearance in Class 4, understandably still has work to do to get ready for Tuesday night’s season opener at Blair Oaks.

Blair Oaks went 0-2 against each of the other three teams.

“It was up and down,” Blair Oaks coach Brandon Moore said. “We came out strong against Helias with a good effort, then we relaxed a bit against Jefferson City.

“Tipton is a very good basketball team, they understand the game really well.”

Moore wasn’t concerned with the scoreboard, it was seeing how his team played.

“Is it the right pace, are we making the right reads, are we getting into the proper sets?” he said. “Those are things we probably do well tonight that we’re going to have to work to improve on. It allows us the chance to sew what we need to improve on in practice.”

Blair Oaks opens the season at home Monday against Camdenton before hosting Helias on Tuesday.

Jefferson City went 0-1-1 against Tipton to start the night. The Lady Jays then split with Helias before sweeping Blair Oaks.

“We saw some bright lights, but there are things we were doing that were the same mistakes we saw at the start of last season,” Foster said. “Turnovers and missed layups, those are things that are fixable, we fixed them last year.

“We need to value the ball, value possessions going forward.”

Jefferson City is scheduled to host Eldon to start the season Tuesday night.

“I’ve got my fix-it list ready to go,” Foster said. “We’ve got some things to work on in the next few days.”