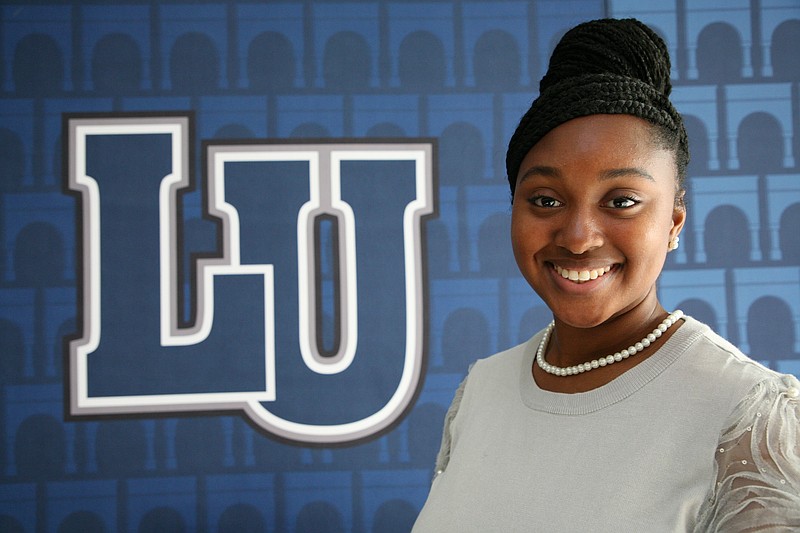 Anna Watson/News Tribune photo: Octavia Ailsworth stood before a Lincoln University emblem in at Scruggs University Center on Friday, Nov. 11, 2022. She serves as the student liaison to the Jefferson City Council.

Ailsworth plans on becoming a doctor, but mentioned Friday at the Scruggs University Center that she may pursue a master's degree in public health before attending medical school.

"I decided on medicine because when I was younger, I was involved in a lot of STEM programs at home," she said.

She currently studies chemistry and minors in mathematics. Her focus is on becoming a nephrologist, which diagnoses or treats conditions of the kidney.

In between senior classes, studying, extracurricular activities and singing in a choir, Ailsworth serves as the Lincoln University student liaison to the Jefferson City Council.

She attends council meetings, which are held every other Monday, and provides information to update council members and the public on university events and activities.

"We would like to encourage everybody to attend the breast cancer awareness Passion for Pink 5K run on Sunday," Octavia shared at an Oct. 17 meeting.

The experience allows her to venture away from campus and experience a different kind of atmosphere, she said.

"I pretty much focus on providing a bridge between the community and Lincoln University," Ailsworth said.

University President John Moseley asked her to serve as liaison, she said, after he heard her speak at the Honors Convocation. Her speech discussed when she decided to attend the university before freshman year.

She said attending a HBCU (historically Black college university) was a top priority, and when learning about the university at a job fair, a weird feeling came over "that maybe this is my school."

She said she doesn't regret her decision. Ailsworth said adjusting to living away from home, Memphis, Tennessee, took time because she is an only child. Memphis is far enough that a weekend trip isn't plausible.

"Here at Lincoln, I immersed myself, I got involved in many clubs and that really helped me thrive, I wasn't so homesick," she said.

Ailsworth said she decided to pursue nephrology while participating in an internship at the Vanderbilt University Medical Center in the lab for nephrology and hypertension.

"After I did more research, I talked with many health professionals there who also studied the kidney, and I became very interested in it," she said.

After setting down, Ailsworth dreams of having several dogs.

"I have been begging my parents to give me a dog my whole life," she said with a laugh. "I do want several ... maybe two."

CORRECTION: This article was edited to correct a mistyped word in a quote.