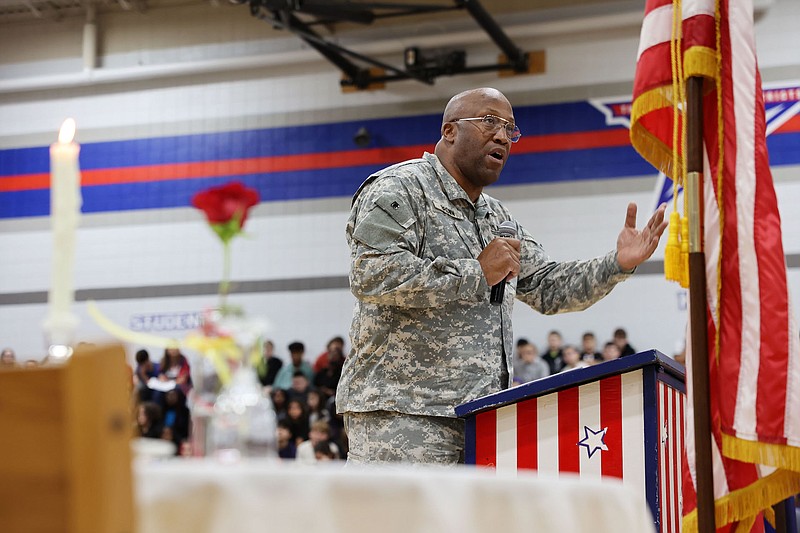 There are all sorts of paths to becoming a teacher, but Eddie Brown might have taken the most unusual one.

Brown, a retiree with nearly 20 years of experience in law enforcement and 30 years in the military, was on a walk one day with a few fellow retirees. The group makes a habit of traversing the West Edgewood trail, and along their way, they pass Thomas Jefferson Middle School.

Brown calls himself a "person of faith" and said he spends a lot of time in prayer. At the time, he had been considering how he could give back to his community.

As Brown and his friends passed the school, they saw students streaming out of its doors. It must be a fire drill, he thought.

"I approached a member of the staff and I said, 'Hey, are you guys still looking for substitute teachers?' And they said, 'Well, of course,'" Brown recounted.

Added Brown: "I've always had a passion for kids and wanted to make an impression on them because honestly, kids are our future."

Brown went on his way that day, but later came back.

TJMS Principal Emily Vallandingham, who had no idea the interaction had occurred between Brown and her staff that day, was outside on bus duty during dismissal about a week later. She got a call over the radio that someone was there to speak to her.

Vallandingham met Brown, who told her he wanted to become a substitute teacher. She brought him into her office and explained the paperwork and process he would have to go through. Those wishing to become substitute teachers must undergo a certification process, provide records of their education, and submit to fingerprinting and a background check.

A little while later, Brown sent Vallandingham an email. He had completed his paperwork and was ready to sub.

"I intended to email him back in the morning and say we were looking forward to him accepting sub jobs at TJMS," she said.

But the next morning, Brown was there. He didn't know how to work the website where he could accept substitute teaching jobs, so he showed up.

A secretary showed him how to work the website for the future, but the school had open positions that day, so they put him to work.

Brown has been subbing for TJMS two to three days a week since then.

Brown sees it as a chance to make a difference.

"It's an opportunity for me to make an impression on a young life and try and help kids," he said.

"He also, in addition to subbing, he will -- whenever he has a break -- he'll go and ask teachers if they need a break," Vallandingham said. "Do you need to run to the restroom? Do you need anything? And so he's just been a really big positive force in our building."

He's happy to fill in where needed, but he said he won't sub anywhere else. He wants to sub in a place where the students know him and the way his classroom runs. He also said he enjoys being on Vallandingham's team.

Vallandingham said he brings joy to the school.

"He's also just got a lot of life experiences, having been in the military and having been a police officer, and so he's got good stories to tell and just kind of has a lot of wisdom that he imparts on the staff and students here," she said.

Brown said he spent time in the National Guard and was deployed to what was then Yugoslavia, Bosnia, Kosovo and Panama before retiring in 2016, having reached the rank of lieutenant colonel.

Brown feels there's a lot that young people can learn from those who served.

Brown brought his three decades of military service to bear as he shared some life lessons with students Thursday at the TJMS Veterans Day Assembly.

Brown's contributions to the school have made it easier on teachers, Vallandingham said.

Although there may not be a significant need for substitutes everyday, the school does often ask teachers to use their plan time to cover classes that don't have a substitute teacher.

"It does add an added responsibility to a teacher's day whenever they don't get what would be their typical plan time because they're covering another class, and so having somebody like Mr. Brown, when he shows up, that basically alleviates all of those teachers that would have to give up their plan period to go cover a class to make sure students are getting instruction. They get that plan time back," Vallandingham said.

Teachers are free to use that time to plan lessons, grade, go to meetings or examine student data.

For his part, Brown is glad to be of service.

"I like the kids, and I'm helping the teachers. That's why I do it," he said.

Some of his friends are surprised to learn that he is now a substitute teacher.

"Back in the day when I was that young, I wanted attention, I wanted people to pay attention to me," Brown said. "And I've got young people that come in and every time they see me they want to hug me. When a child is struggling the most, they need to know that they're loved."

Print Headline: ‘Every child needs to be loved’