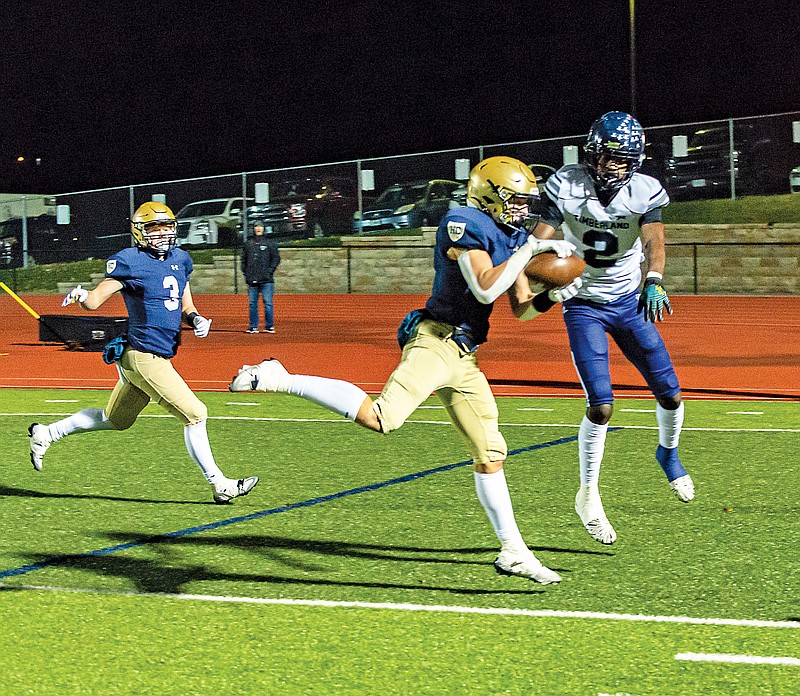 A.J. Raines was as good as advertised.

The Timberland senior quarterback racked up 430 yards of total offense Friday night to lead the fourth-seeded Wolves to a 41-24 victory against the second-seeded Helias Cruasders in the Class 5 District 4 championship game at Ray Hentges Stadium.

“His ability to extend plays really was a deciding factor tonight.”

Helias got on the board first in the game.

After getting a turnover on downs, Helias took over at its own 35. Six plays later, Alex Marberry came in at running back and took the ball 41 yards for a touchdown. Nic Calvaruso kicked the extra point and Helias led 7-0 midway through the opening quarter.

Timberland then drove inside the Helias 20 on its next drive before Maddox Alfultis of Helias intercepted a Raines pass in the end zone.

Timberland’s next drive found the end zone. The Wolves went 67 yards in 10 plays, with the score coming on a 16-yard pass from Raines to Creighton Ervin. Raines booted the extra point and it was tied at seven in the opening minute of the second quarter.

Another Timberland turnover led to Helias’ next score when Myles Gresham of the Crusaders recovered a fumble at the Helias 46.

On the next play, Drew Miller connected with Marberry for a 54-yard touchdown and Calvaruso’s PAT gave Helias a 14-7 lead with 5:39 left before halftime.

But Timberland had a response. Starting at their own 10 after a penalty on the kickoff return, the Wolves went 90 yards in nine plays, with Ervin scoring on a 5-yard run. Raines kicked the extra point and it was tied at 14 with 3:17 left in the second quarter.

Helias drove to the Timberland 10 late in the quarter before Calvaruso came on to kick a 27-yard field goal that gave the Crusaders a 17-14 advantage going into halftime.

“We hit them with a few big plays and that’s why we were up,” Hentges said. “We didn’t really have many sustained drives.”

Timberland finished the first half with 339 total yards -- 130 rushing, 209 passing -- but was hurt by three turnovers.

Helias did not turn the ball over in the first half and finished with 158 total yards.

Helias got the ball first in the third quarter, but was forced to punt. Timberland then took its first lead of the night, going 55 yards in nine plays, with the touchdown coming on a 2-yard pass from Raines to Travis Reeves. Raines’ extra point made it 21-17.

The next three Helias drives ended in turnovers. Timberland turned the second one into points when Raines ran it in from 20 yards out before kicking the extra point to extend the Wolves’ lead to 28-17 with 4:13 left in the third quarter.

Helias cut the deficit to 28-24 on the first play of the fourth quarter on a 7-yard run by Miller and an extra point from Calvaruso.

But Timberland answered on its next drive, going 74 yards on nine plays. Raines scored on a 7-yard run before the extra point was blocked to make it 34-24.

The Wolves’ final touchdown came with 1:10 remaining on a 4-yard run by Tank Billings.

Timberland finished with 249 yards passing and 310 yards rushing. The Wolves had 30 first downs.

Helias ends its season at 9-3.

Timberland (9-3) advances to the quarterfinal round where it will host Francis Howell (11-0).