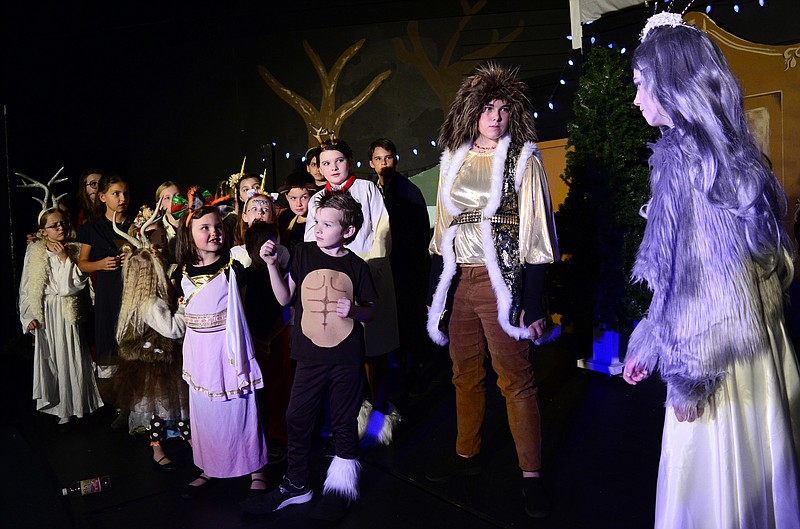 Eileen Wisniowicz/News Tribune photo: Aslan, played by Eden Johnson, stares down the White Witch, played by Haley Kimlinger during a dress rehersal for the Lion, the Witch and the Wardrobe on Tuesday, Nov. 8, 2022 at Itsy Bitsy Theatre in Jefferson City. Opening night for the play is Nov. 10.

"The Lion, The Witch and The Wardrobe" is an epic battle of good and evil. The story, originally authored by C.S. Lewis and dramatized by Joseph Robinette, will be brought to life by Itsy Bitsy Broadway.

Itsy Bitsy Broadway is an organization under the Muse Theatre Company umbrella at the direction of Kira Rutter. It seeks to introduce children of all ages to theater through plays, musicals and other production classes.

The show runs Thursday through Saturday with shows at 6 p.m. and a 2 p.m. matinée Saturday. Performances are at the Capital Mall in Jefferson City in the old Sears wing, across from the interior entrance of Joann Fabrics. Tickets are $5 for adults and $3 for children ages 3 and above.

"We run our shows a little earlier," Rutter quipped. "Some of our participants need to go to bed at a reasonable hour."

Money generated by ticket sales is funneled directly back into the theater. Funds contribute to increasing the caliber of performances, covering license royalties, and the creation and purchase of costumes, set pieces and props. Soon the theater hopes to purchase a projector to incorporate into future productions.

Due to increased interest in "The Lion, The Witch and The Wardrobe," the show will be presented by two different casts. Both sections are cast with a variety of ages and will feature the same play, costumes and technical elements for each event. Each cast will alternate shows and are respectively under the direction of Jennifer Kimlinger and Jessica Cayou.

"It is fun to see multiple casts take a stab at the exact same roles, which is great to see each of their takes. You get to see how much impact an actor has on how a show is communicated," Rutter said.

The production has been a communal effort between the cast, stage parents, directors and technical director, Jon-Michael Rutter, who is Kira's husband. Talent extends behind the scenes, as the show's crew is staffed entirely by children and teens ages 9-15.

Throughout each production cycle at Itsy Bitsy Broadway, there is a heavy focus of meeting each child where they are and advancing the individual's creative expression.

"The kids have put so much work into it. It is really amazing to see what they can pull off when they are given the chance," Kira Rutter said. "We are really proud of them and cannot wait to show the community what they are capable of." 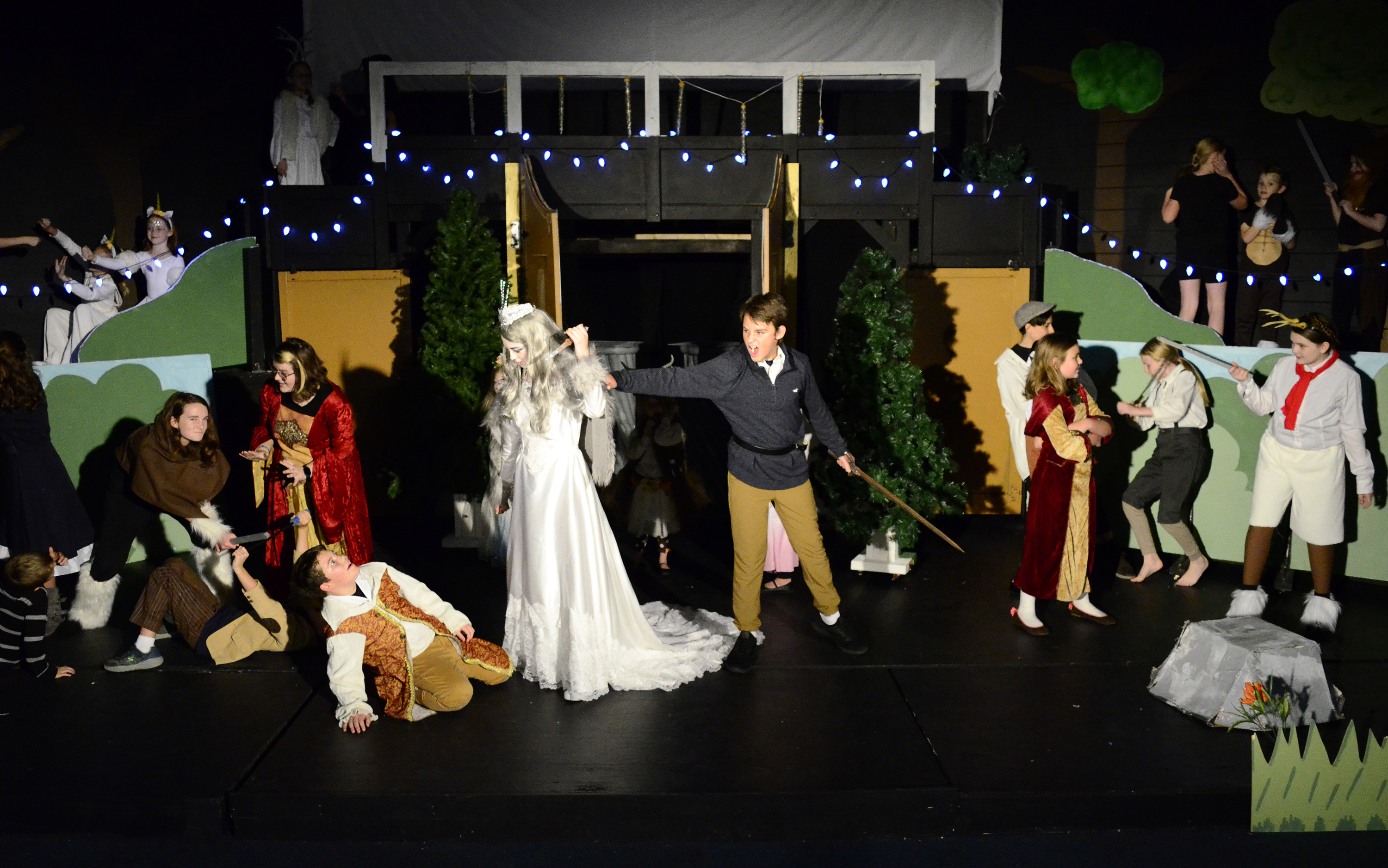 Eileen Wisniowicz/News Tribune photo: Peter, played by Kade Johnson, stops the White Witch, played by Haley Kimlinger, during a dress rehersal on Tuesday, Nov. 8, 2022 at Itsy Bitsy Theatre in Jefferson City. The scene was from the Lion, the Witch, and the Wardrobe which will open on Thursday, Nov. 10. 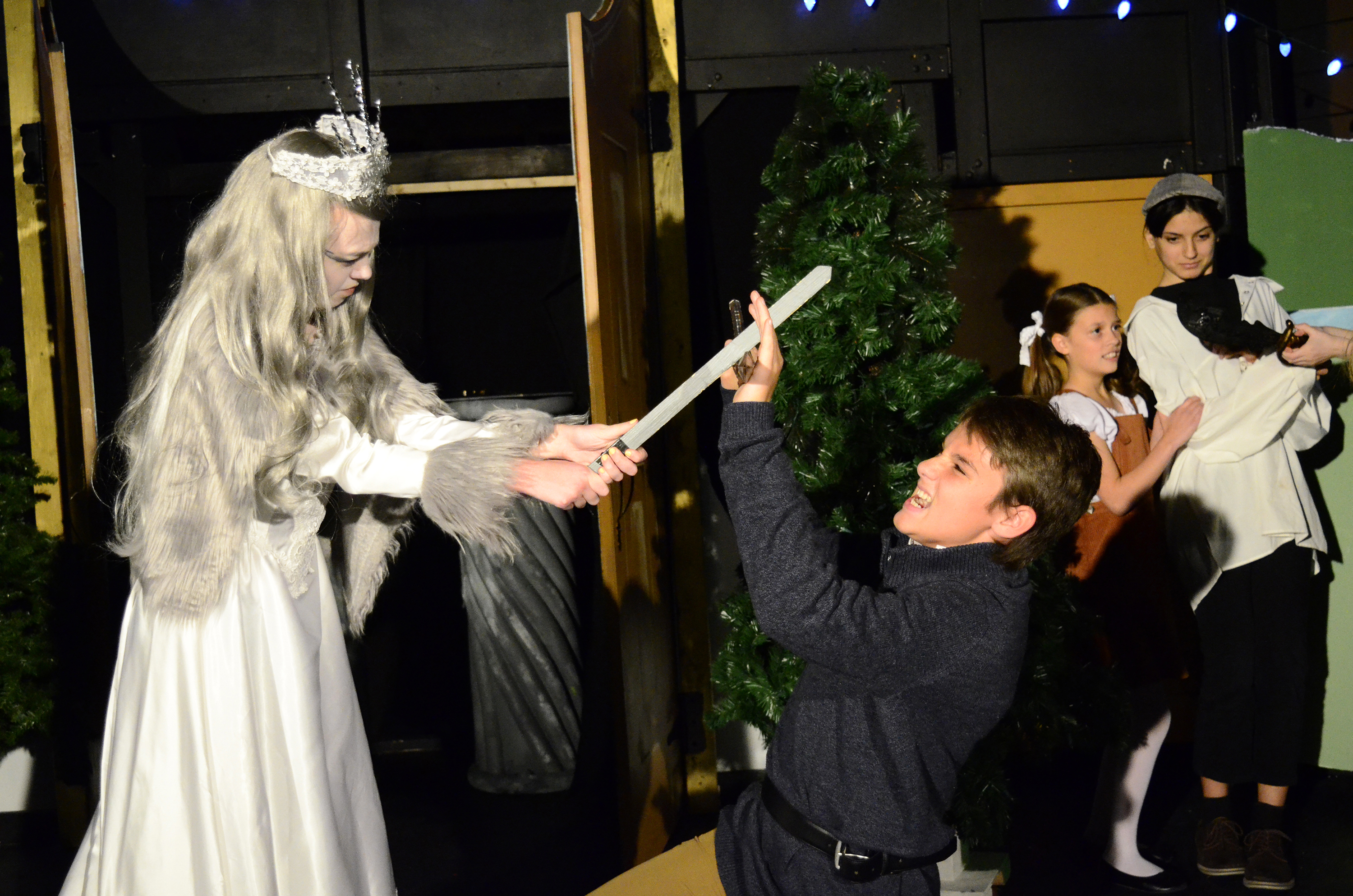 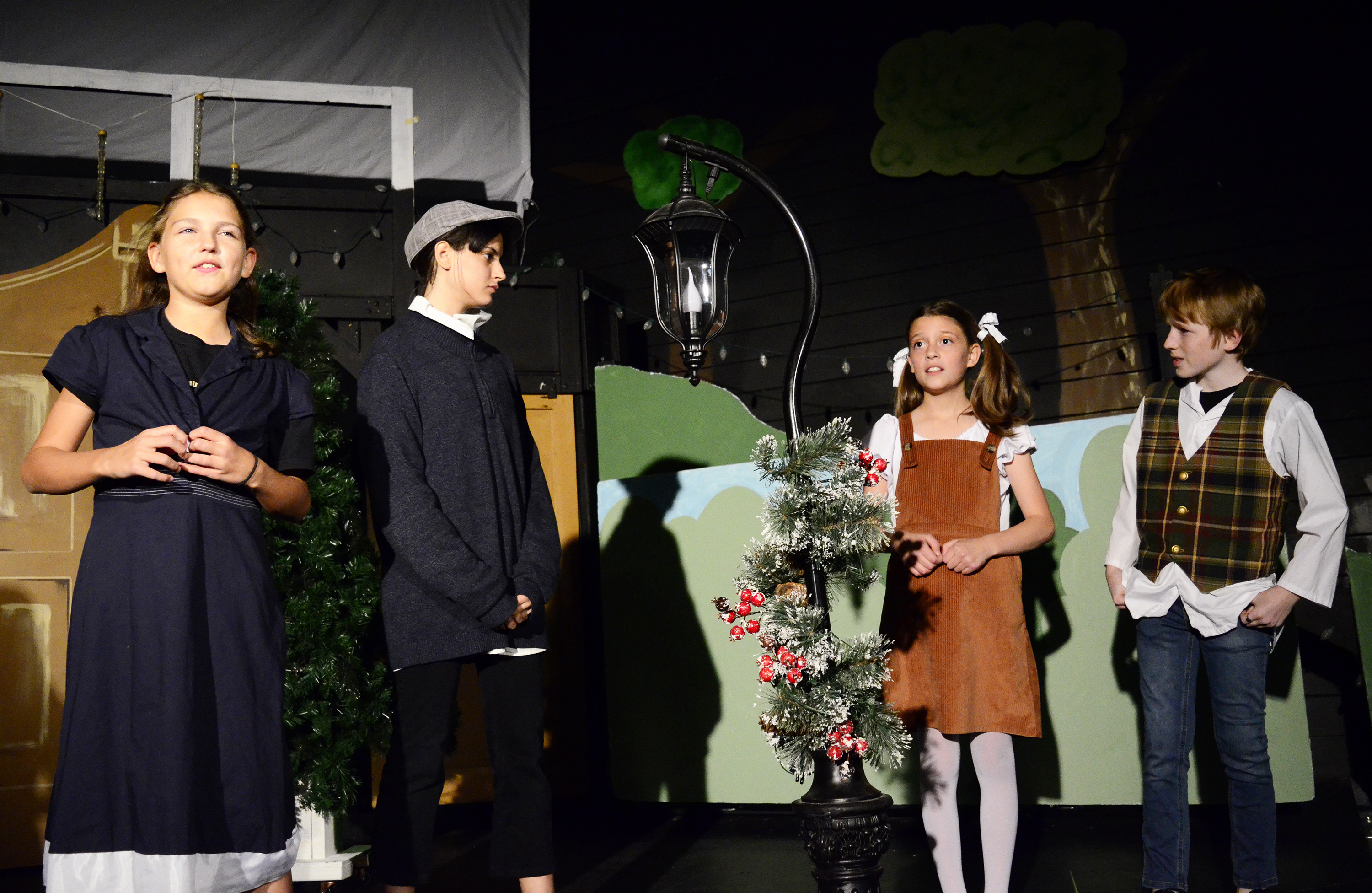 Eileen Wisniowicz/News Tribune photo: From left, Susan played by Norah Coats, Peter played by Emma Damas, Lucy played by Olivia Peters, and Edmond played by Kurt Webb talk around a lamppost during a scene from the Lion, the Witch, and the Wardrobe on Tuesday, Nov. 8, 2022 at Itsy Bitsy Theatre in Jefferson City.