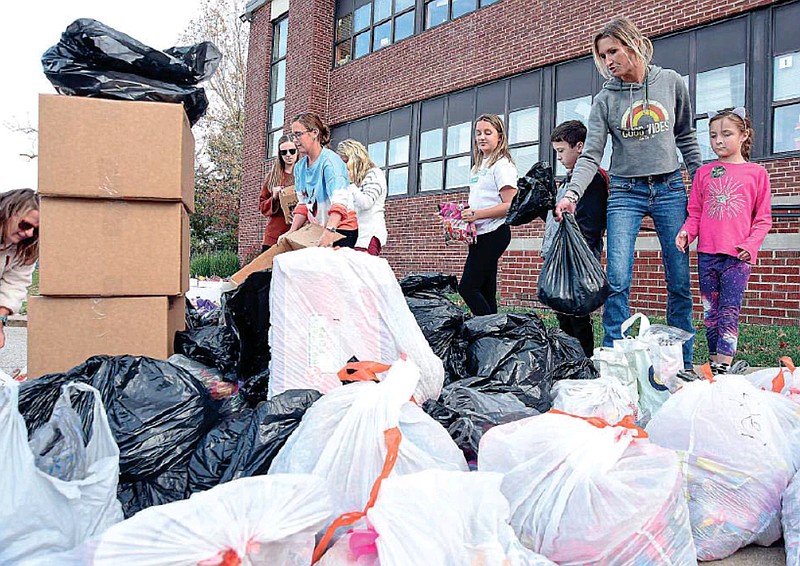 Parents, students, teachers and volunteers stack up boxes and bags of candy totaling nearly one ton that was then given to representatives from the Family Warrior Support Programs and Soldier and Family Readiness Group of the Missouri National Guard. The candy will then be distributed to veterans homes and VA hospitals and to veteran organizations to help distribute. (Julie Smith/News Tribune photo)

Students and their families brought in their leftover Halloween candy to school to be donated to military families. Bags and boxes of candy were loaded into a truck and a van Monday to be shipped off.

Last year, JC Schools sent more than a ton of candy to the Missouri National Guard's family program. This year, it looked to be about the same amount. The candy is distributed all over to National Guard units, VFW posts, veterans homes and other locations.

"As they're donating their leftover Halloween candy, they'll get rewarded with physical activity, so we kind of think that's a win-win," JC Healthy Schools Coordinator Kelsey Chrisman said at the end of last year's competition.

The event is also a friendly competition between classrooms and schools. Top achievers earned extra recess, according to the announcement of the give back event.

Chrisman said next year she hopes to incorporate thank you cards into the bags and boxes of candy that are sent to soldiers at home and abroad.