Parsons recognize military wives with lunch at the mansion 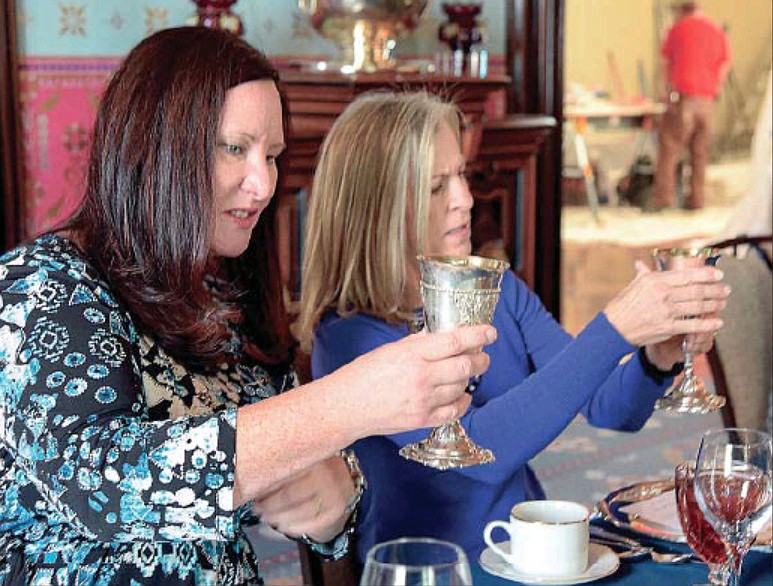 Heather Cluck, left, and Heidi Meyer marvel at the detail on the silver goblets at their table Monday, Nov. 7, 2022. They were among a dozen military wives invited to a luncheon in their honor at the Missouri Governor's Mansion in Jefferson City. (Julie Smith/News Tribune photo)

With Veterans Day on Friday, the first lady said she wanted to host an event recognizing some of the wives tied to the top military posts in the state.

"Of course being a spouse myself, I thought that it was important that the spouses as well be recognized," she said.

Even the plates and cutlery were connected to military service.

The Missouri Governor's Mansion has 317 pieces of silver tableware from the U.S.S. Missouri battleship. The collection is enough for 16 full table settings and includes candelabras, water pitchers and some items that stay on display in the mansion, such as a large punch bowl, tea kettle and coffee urn.

"This is only used for special occasions," Mansion Director Shari Childs said, adding it has been used by the current administration three times before, all for military-oriented events.

Built in 1944, the U.S.S. Missouri was the last battleship commissioned by the U.S. Navy. It served in the Pacific Theater during World War II and was the site where Japan surrendered the war in 1945.

Childs said the state has a memorandum of understanding with the Navy over the 1904 silver, which requires an annual count of the pieces.

"It's really beautiful, and we love every moment that we get to have it out there for anybody to see," Childs said. "You know, it's not something that a lot of people get to see."

The first lady was joined by about 10 other military wives for the lunch. She said more were invited, but action at Whiteman Air Force Base prevented some from attending.

Jennifer Diehl, whose husband commands the 509th Bomb Wing at Whiteman Air Force Base, said it was an exciting invitation to receive.

"It's a lovely home and to be welcomed here by the first lady herself is an incredible opportunity," she said.

"I think it's a very prestigious invite," added Susan Kennish, whose husband serves as the vice wing commander of the 131st Bomb Wing at Whiteman.

Gov. Mike Parson, who served six years in the U.S. Army, gave a few words before departing for a noon meeting.

"I appreciate all of you behind the scenes," he told the lunch guests. "I get the brass being up front, being seen and all the titles, but I'll tell you what, for you to be there at their time of need is what's so important about the military."

Missouri is home to more than 410,000 veterans and 13,000 active duty military members, according to the Missouri Veterans Commission.

Carrie Leonas has been married to the vice wing commander of the 442nd Fighter Wing at Whiteman Air Force Base for the past 32 years.

"It's very sweet to be invited to something like this to appreciate the spouses. It's always nice," she said. "I was really excited."

Leonas said she was shocked when the invitation arrived in the mail. She said military officials usually get the glory and "we get all the work."

"I thought that was amazing they remembered us," she continued. "Our husbands, we are the backbone of what they do so it's nice when people remember that there are other people that help get them where they are."