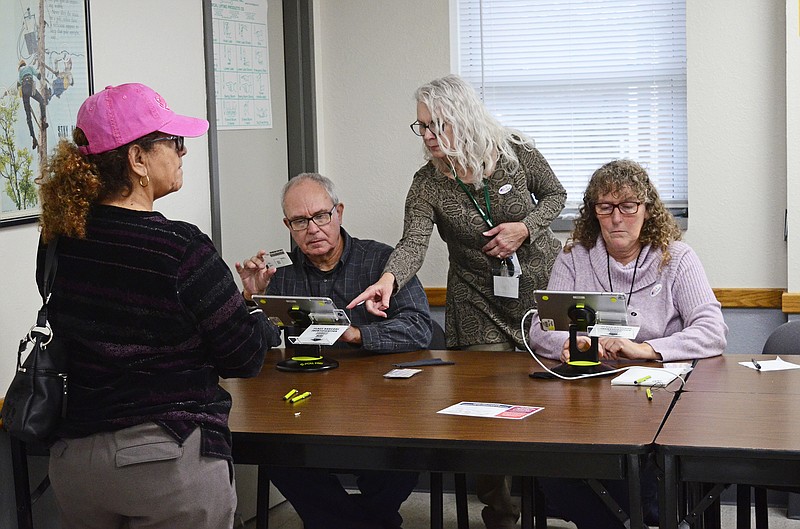 More than 50 percent of Cole County's registered voters went to the polls Tuesday.

The unofficial figures from the Cole County Clerk's Office note 28,788 ballots were cast out of 54,237 registered voters. That's 53.08 percent.

Going into the election, Cole County Clerk Steve Korsmeyer had predicted about a 35 percent turnout, which he said is the average for midterm elections.

After seeing the long lines at the polls Tuesday, he wasn't surprised by the numbers.

"Originally, I didn't expect that much, but I am very happy with the results," he said. "I think people just felt compelled to get out and vote with just the way the state of the country is. There's quite a few amendments on there, so I think a lot of people came out for those, too."

Out of all ballots cast, 5.73 percent were absentee.

"These results are close to what happened in 2018," Korsmeyer said. "Whether it was related to marijuana being on the ballot again or not, I don't know. There were some other issues there, too, so I think people just felt compelled to voice their opinion."

Following the passage of an election reform bill earlier this year, this was also the first election that voters were required to present a photo ID. Voters without an ID could vote with a provisional ballot, which are counted as long as the voter's signature matches the signature on file in the county's voter rolls.

There were a few issues with voting machines throughout the day Tuesday, Korsmeyer said.

The ballot scanning machines were fixed or replaced fairly quickly once Korsmeyer was able to get there.

"I think the worst one was at Cornerstone (Baptist Church) because it had broken down early, and by the time we got it fixed, they'd already voted so many people, we had approximately 250 ballots that we had to put back in to bring it back up to date," he said.

The accessible voting machine took a few hours to replace because the spare machine was also not working.

"We had used that for absentee voting, and it would not reprogram today's election (results)," Korsmeyer said.

The supplier had to drive another machine down from Clinton, he said, and the new machine was there at about 10:30-11 a.m.

Korsmeyer said he talked to poll monitors from the Department of Justice on Tuesday at the County Employees Retirement Fund polling location at 2121 Schotthill Woods Drive.

"They were well out of the 25-feet area, and they were just monitoring things," he said. "I stopped to talk to them briefly. They were very nice. We just had a conversation about the day and the turnout."

On Monday, Korsmeyer said he had declined to allow the DOJ's presence inside polling places.

At first, he was not concerned with the poll monitors being inside the buildings, he said.

"Originally, I interpreted the law differently than our legal team did," he said Tuesday. "When I conferenced with them, they decided that they weren't really allowed to come in."

The DOJ put out a news release Monday morning announcing its intent to monitor compliance with federal voting rights laws in 64 jurisdictions across 24 states Tuesday. Cole County is the only jurisdiction in Missouri being monitored.

"Every time I've been to that polling place, I've noticed there are just a ton of stairs, and there is a ramp kind of over on the left side, but it's not real clear that it's even there," local attorney Chuck Hatfield said. "I have witnessed, over the years, people walking down those stairs who were elderly with canes."

"It looks like that sign is pointing you toward this big, blue door, where you could just literally go right into the building," he said. "It is ground level, there's no ramp, there's no stairs, it looks like a really accessible place. But that door's locked when there's an election going on."

Poll workers at that location said they had not had any accessibility complaints Tuesday, and they did not see poll monitors there.