Chiefs marvel at Mahomes, realize he can’t do it alone 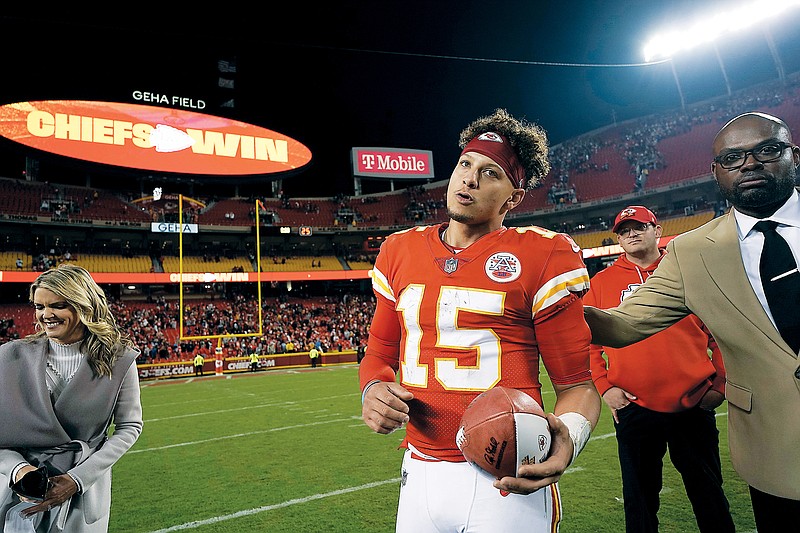 KANSAS CITY -- Nick Bolton is supposed to be thinking about the next defensive series when he’s on the sideline, especially considering the Kansas City Chiefs linebacker is responsible for making sure his guys are lined up properly on the field.

Even for Bolton, though, it is hard to keep his eyes off Patrick Mahomes.

His latest did-you-see-that performance came Sunday night against the Tennessee Titans, when he set franchise records for completions (43) and attempts (68) while throwing for 446 yards with a touchdown and an interception.

But it was his sheer willpower that lifted the Chiefs from a 17-9 deficit to a 20-17 overtime victory.

There was the third-and-17 play that broke down, when Mahomes scrambled seemingly eight different directions before he was wrestled down after a 20-yard gain. The third-and-9 play, when the Chiefs needed a touchdown with just more than four minutes to go, and Mahomes took off to his right and bulldozed his way into the end zone.

And the tying 2-point try, when the Titans knew he’d have the ball in his hands and Mahomes converted anyway.

“We kind of get spoiled watching greatness every week,” Bolton said with a smile. “I was proud of him.”

The Chiefs (6-2) certainly needed him, just as they have all season. Mahomes led them from behind to beat the Chargers, threw three TD passes in a win against Tampa Bay and led a late 75-yard touchdown drive to put away the Raiders.

Even when he’s gotten very little help, Mahomes has been able to make more magic.

It’s been the one constant for Kansas City this season.

“We had like, 90 plays, and at the end of the 90 plays he’s running around like it’s play 3,” Chiefs coach Andy Reid said of Mahomes’ latest starring turn against Tennessee, “and he’s still able to throw the football and control the huddle and do all the things that you’re supposed to do.”

The Chiefs gained 164 yards on their last two scoring drives. Mahomes accounted for 124 through the air and 36 on the ground -- all but 4 of them -- despite relentless pressure from the Tennessee defense.

Yes, Reid was quick to compliment the Kansas City defense, which kept his team in the game long enough for Mahomes to make those late plays. And he knows full well that his quarterback is going to need more help going forward.

Still, the performance Sunday night by Mahomes provided another memorable chapter in another season full of them.

Here are other news and notes as the Chiefs prepare to host the Jaguars on Sunday:

• What's working: The Chiefs defense held the Titans to 38 yards total offense in the second half, and more importantly, shut down Derrick Henry. He rumbled for nearly 100 in the first half, but gained just 22 yards on seven carries after the break.

That’s more like what the Chiefs expect from what had been the league’s No. 3 rush defense this season.

“We talked about the defense that we wanted to be when we first went into training camp and in the first half were not that defense,” Chiefs safety Justin Reid said. “So we came together at halftime, really dug our heels in, talked about coming together. Nobody needed to go out and play any hero ball, we just need to come out and take care of our one-eleventh, trust your teammates to take care of their job next to you and you do your job in front of you.”

• What needs help: The reason Mahomes threw the ball nearly 70 times was that they almost entirely abandoned the run. Mahomes had six carries for 63 yards on scrambles, but the rest of the Chiefs combined to run 13 times for 14 yards.

It was only the latest example of a run game that has been inconsistent this season.

“We can do a little bit better up front,” Reid said. “We can be a little more patient at the running back position, and as coaches we can always dial up different things, you know, and try to figure out something that might fit a little bit better.”

• Stock up: JuJu Smith-Schuster followed up his big game against San Francisco, when he had seven catches for 124 yards and a score, by hauling in 10 catches for 88 yards. He has become Mahomes’ most reliable target besides Travis Kelce this season.

• Stock down: Just about everyone in the Kansas City backfield has struggled at some point this season. And everyone did against the Titans. Isiah Pacheco ran five times for 5 yards, Clyde Edwards-Helaire four times for 5 yards and Jerick McKinnon three times for 4 yards.

• Injuries: The Chiefs dealt with a rash of injuries early in the season, but they are as healthy as they’ve been since camp. Tight end Blake Bell could be back from injured reserve soon, and right tackle Lucas Niang is finally off the PUP list.

• What's next: The Jaguars visit Arrowhead Stadium at noon Sunday after beating the Raiders 27-20 to snap a five-game skid.