Chiefs to lean on McDuffie after trading Fenton to Falcons 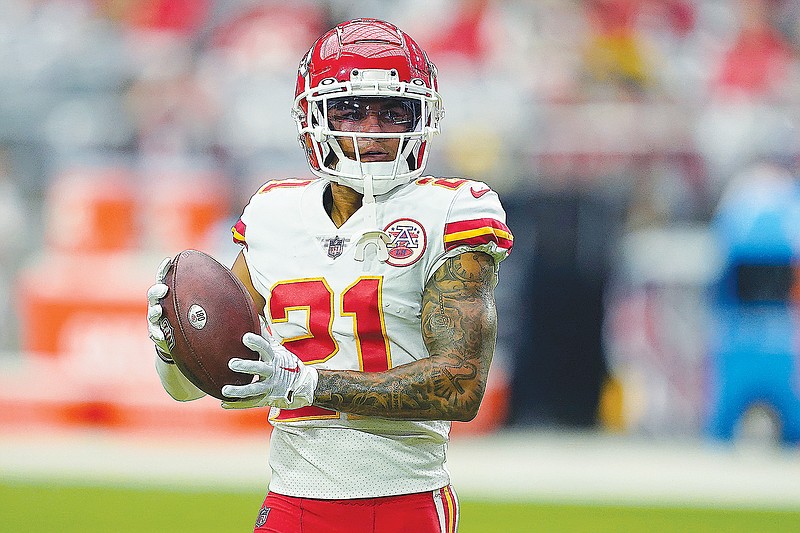 Chiefs cornerback Trent McDuffie warms up before the season opener against the Cardinals in Glendale, Ariz. (Associated Press)

KANSAS CITY -- The Kansas City Chiefs showed overwhelming confidence in their group of rookie cornerbacks this week when they traded Rashad Fenton, one of their few veterans, to the Atlanta Falcons for a conditional draft pick.

The move left them with six cornerbacks on their depth chart, four of whom are rookies.

Yet by this point in the season, the trio of Jaylen Watson, Joshua Williams and Nazeeh Johnson has played enough snaps that calling them rookies is a misnomer. The same can’t be said for first-round pick Trent McDuffie, who hurt his hamstring in the season opener in Arizona and has yet to touch the field for another regular-season game.

That will finally change when he suits up Sunday night against the Tennessee Titans.

“It’s hard to tell (what he’s missed),” Chiefs defensive coordinator Steve Spagnuolo said Thursday. “He’s been out there in this three-week window. He’s been practicing -- some days have gone good, some days haven’t been so good. He had a good day yesterday. We hope he can go out and be the guy we thought he’d be when we got him.”

McDuffie played well enough in training camp to earn the starting job for Week 1. But he had just one tackle while playing 32 snaps against the Cardinals before leaving with a hamstring injury that ultimately landed him on injured reserve.

“That whole window of time, that’s hard to make up. More growing pains,” Spagnuolo said. “The guys that have been out there have been through them. We’ll have to get him out there and see.”

McDuffie was close to returning the past two games, but the Chiefs opted to wait until after their bye week to activate him. It was a sign of just how highly they think of him that they didn’t want to risk his long-term health, but also signaled just how well Watson, Williams and Johnson have played over the past two months.

Watson was the AFC defensive player of the week earlier this season after a 99-yard, go-ahead pick-6 in the fourth quarter of a win against the Chargers. And Williams has lately been tasked with defending the opponent’s No. 1 wide receiver.

The other cornerbacks on the roster aren’t much older than the rookies, either.

L’Jarius Sneed, who typically defends the slot and has wreaked havoc on blitzes, is only in his third season. So is Chris Lammons, whom special teams coordinator Dave Toub called one of his best players on punt and kickoff coverage.

Not a whole lot of experience there. But enough to make the Chiefs comfortable dealing Fenton to the Falcons.

Notes: Toub said rookie WR Skyy Moore would remain in the mix on punt returns, even though he has struggled with fumbles this season. But Toub also acknowledged that newly acquired WR Kadarius Toney could get a chance Sunday. “Coach wants to get a look at him all week and then make a decision on him game time,” Toub said. “That’s literally how far it’s going to go.” … Toney is likely to have a package of plays on offense Sunday, though how extensive it is remains to be seen. “He’s been great for the two or three days he’s been here. He’s picking everything up,” Chiefs wide receivers coach Joe Bleymaier said. “We had heard he’s smart. He’s shown that on the classroom side of it.” … TE Jody Fortson (quad bruise) missed his second consecutive day of practice Thursday.