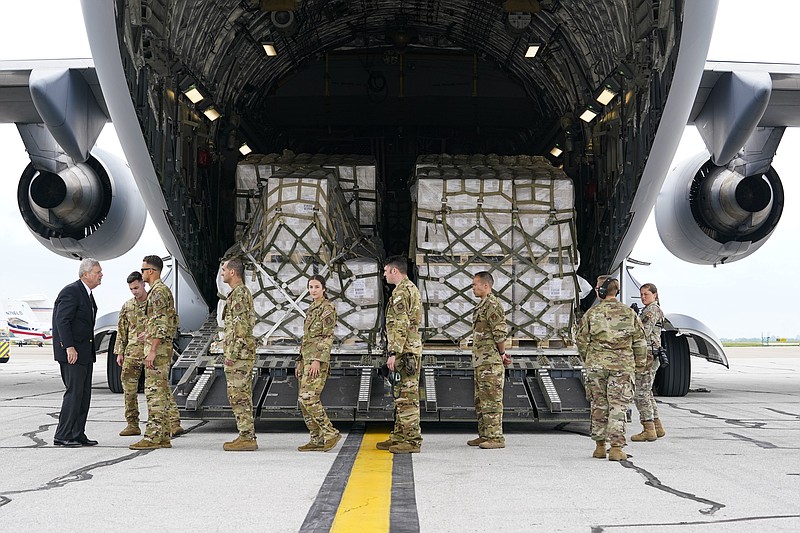 Agriculture Secretary Tom Vilsack, left, greets crew members of a C-17 that delivered a plane load of baby formula at the Indianapolis International Airport in Indianapolis, Sunday, May 22, 2022. The 132 pallets of Nestl&#xe9; Health Science Alfamino Infant and Alfamino Junior formula arrived from Ramstein Air Base in Germany (AP Photo/Michael Conroy)

INDIANAPOLIS (AP) -- A military plane carrying enough specialty infant formula for more than half a million baby bottles arrived Sunday in Indianapolis, the first of several flights expected from Europe aimed at relieving a shortage that has sent parents scrambling to find enough to feed their children.

President Joe Biden authorized the use of Air Force planes for the effort, dubbed "Operation Fly Formula," because no commercial flights were available.

Agriculture Secretary Tom Vilsack was in Indianapolis to greet the arrival of the first shipment.

The flights are intended to provide "some incremental relief in the coming days" as the government works on a more lasting response to the shortage, Brian Deese, director of the White House National Economic Council, said Sunday.

Deese told CNN's "State of the Union" that Sunday's flight brought 15% of the specialty medical grade formula needed in the U.S., and because of various actions by the government, people should see "more formula in stores starting as early as this week."

Longer term, he said, the U.S. needs more formula providers "so that no individual company has this much control over supply chains."

The Biden administration has struggled to address the nationwide shortage of formula, particularly hypoallergenic varieties. The crisis follows the closure of the nation's largest domestic manufacturing plant in Michigan in February due to safety issues.

The White House has said 132 pallets of Nestle Health Science Alfamino Infant and Alfamino Junior formula was to leave Ramstein Air Base in Germany for the U.S. Another 114 pallets of Gerber Good Start Extensive HA formula were expected to arrive in the coming days. Altogether, about 1.5 million 8-ounce bottles of the three formulas, which are hypoallergenic for children with cow's milk protein allergies, are expected to arrive this week.

Indianapolis was chosen because it is a Nestle distribution hub. The formula will be offloaded into FedEx semitractor-trailers and taken to a Nestle distribution center about a mile away where the company will do a standard quality control check before distributing the supplies to hospitals, pharmacies and doctor's offices, according to an administration official on site.

In a statement Sunday, the White House said a Pentagon-sourced FedEx Express flight of Nestlé S.A. formula from Ramstein Air Base would be bound for a Nestle facility in Pennsylvania.

Nestle said that over the past few months it has worked "around the clock" to address the formula shortage and help meet demand.

"We have significantly increased the amount of our formulas available to consumers by ramping up production and accelerating general product availability to retailers and online, as well as through hospitals and home health care for those most vulnerable," the company said in a release.

"At Nestle we are absolutely committed to doing everything we can to get parents and caregivers the formula they need so their children can thrive," it added. "We prioritized these products because they serve a critical medical purpose as they are for children with cow's milk protein allergies."

Under "Operation Fly Formula," the Department of Agriculture and the Department of Health and Human Services are authorized to request Department of Defense support to pick up overseas infant formula that meets U.S. health and safety standards, so it can get to store shelves faster, according to the USDA.

Alfamino is primarily available through hospitals and home health care companies that serve patients at home.

U.S. regulators and the manufacturer, Abbott Nutrition, hope to have its Michigan plant reopened next week, but it will take about two months before product is ready for delivery. The Food and Drug Administration this week eased importation requirements for baby formula to try to ease the supply crunch, which has left store shelves void of some brands and some retailers rationing supply for parents nervous about feeding their children. 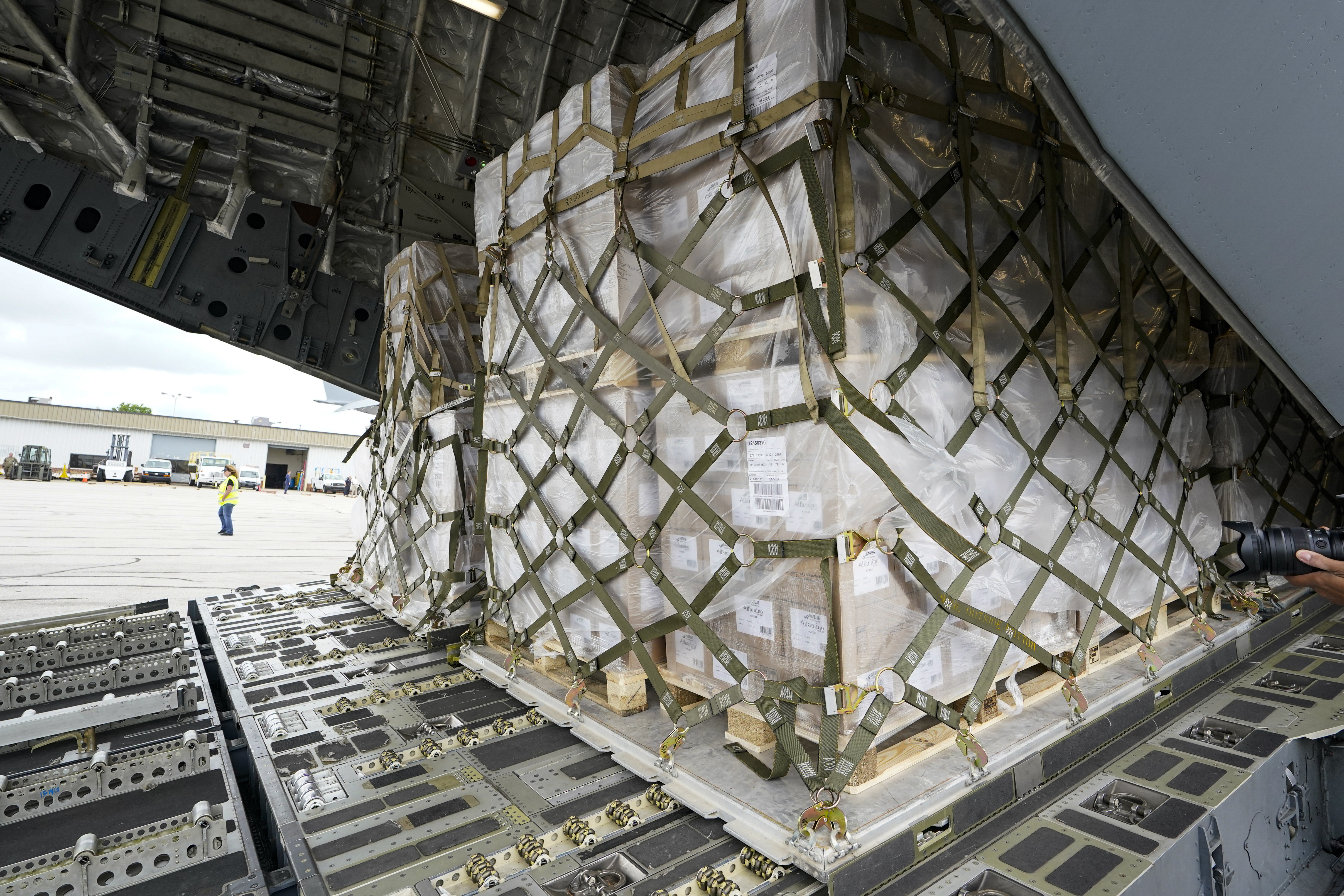 The 132 pallets of Nestlé Health Science Alfamino Infant and Alfamino Junior formula are shown in the cargo hold of a C-17 plane at the Indianapolis International Airport in Indianapolis, Sunday, May 22, 2022. (AP Photo/Michael Conroy) 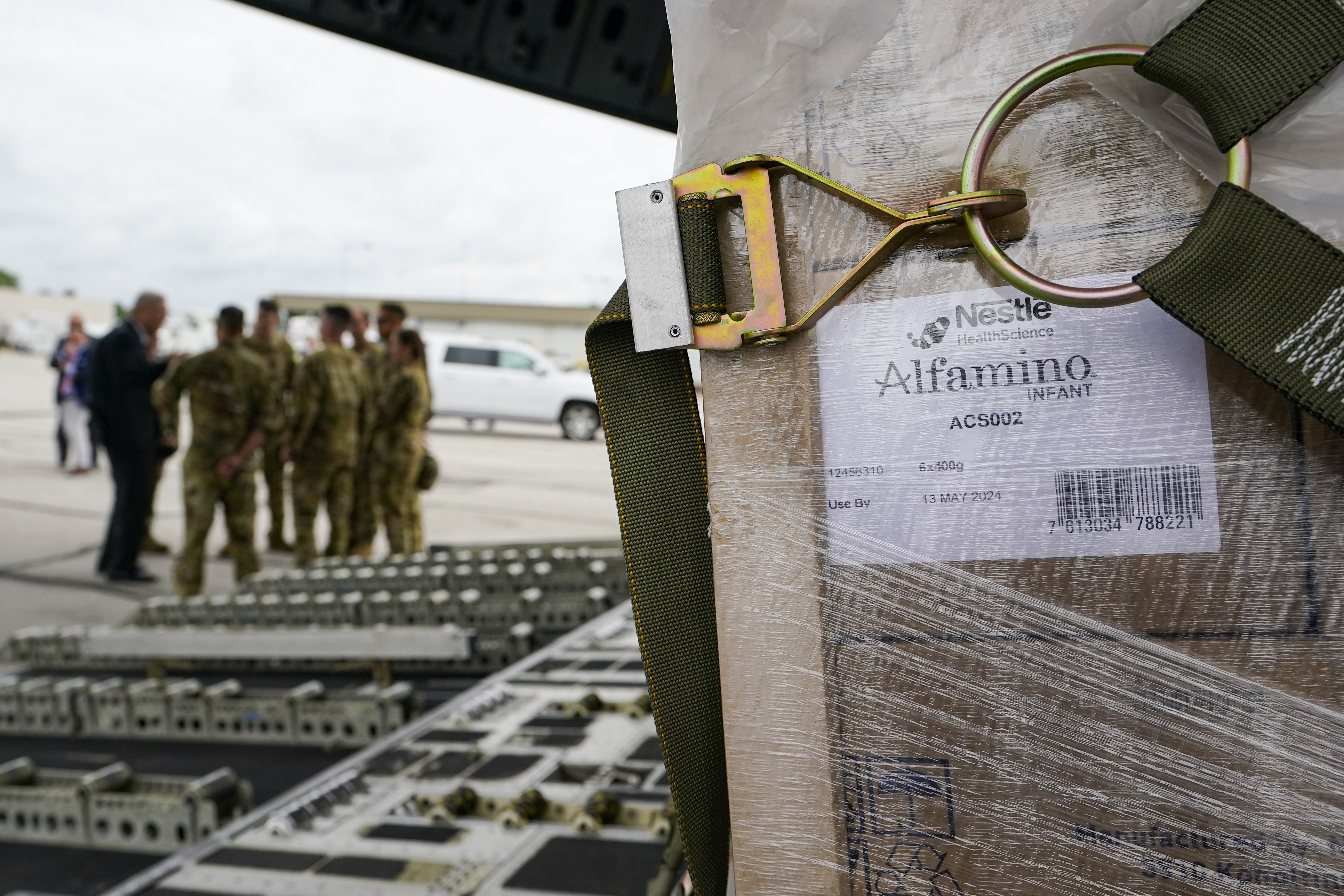 Agriculture Secretary Tom Vilsack, left, greets crew members of a C-17 that delivered a plane load of baby formula at the Indianapolis International Airport in Indianapolis, Sunday, May 22, 2022. The 132 pallets of Nestlé Health Science Alfamino Infant and Alfamino Junior formula arrived from Ramstein Air Base in Germany (AP Photo/Michael Conroy) 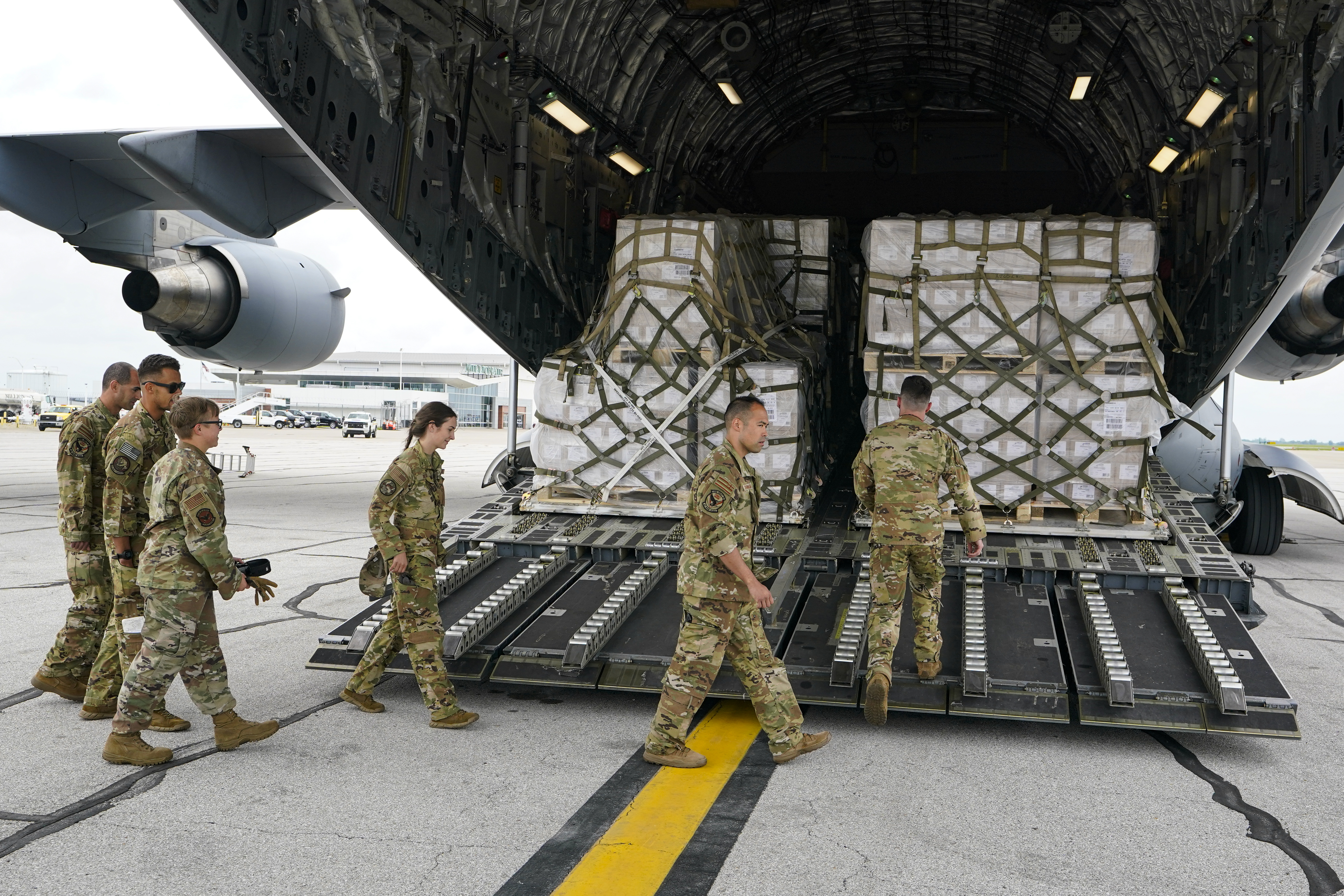 Crew members of a C-17 begins to unload a plane load of baby formula at the Indianapolis International Airport in Indianapolis, Sunday, May 22, 2022. The 132 pallets of Nestlé Health Science Alfamino Infant and Alfamino Junior formula arrived from Ramstein Air Base in Germany (AP Photo/Michael Conroy)

Print Headline: 78,000 pounds of infant formula arrives in US