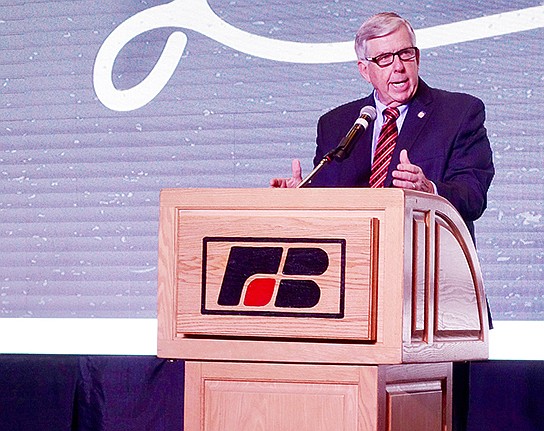 As the dust clears from a raucous few months at the Capitol, the Missouri Farm Bureau is praising legislative victories for the state's largest industry.

The group, which works closely with lawmakers throughout the year to advance bills that benefit Missouri farmers and agricultural businesses, saw a handful of longtime priorities make it to the governor's desk. Lawmakers passed investments in broadband expansion, revived expired tax incentives for farmers and budgeted $500,000 for a cost-share program benefiting agritourism businesses, which MOFB said was the fastest-growing segment of the ag industry. That's on top of a priority bill concerning landowner rights and eminent domain.

"Our members have worked tirelessly for years on a number of issues that finally saw results this session," MOFB President Garrett Hawkins said in a statement Thursday. "From supporting property rights to developing rural communities and expanding broadband internet to all Missourians, this year will be remembered as a banner year for rural Missouri. I am proud of our members' grassroots advocacy and appreciate the hard work the legislature took on to make meaningful change for our state a reality."

Among the economic priorities for the year was the re-authorization of several tax credits, which are given sunsets in statute and allowed to expire if lawmakers do not extend them. An agricultural package brought back the New Generation Cooperative Incentive, Meat Processing Facility Investment and Agricultural Production Utilization tax credits, all of which had expired last year after the General Assembly failed to extend them.

New Generation Cooperative Tax Credits induce investments into new processing groups, allowing up to 50 percent of the ag producer's cash investment into the operation or $15,000. Meat Processing Facility Investment Tax Credits support meat facilities' modernization projects, crediting up to 25 percent or $75,000 of the project. The Agricultural Production Utilization Tax Credits cover up to 100 percent of an individual or business' contribution to the Missouri Agricultural and Small Business Development Authority (MASBDA), the entity which oversees all of these tax credit programs.

The $500,000 investment in a cost-share assistance program for agritourism businesses would allow them to purchase and place signs on highway right-of-ways, according to MOFB. The group said the funds, included in this year's budget package, would allow the sector to advertise its businesses and opportunities to tourists traveling Missouri roads.

The group maintains a database of agritourism locations across the state, with more than 580 orchards, markets, wineries and zoos scattered across Missouri. MOFB touts the sector as an opportunity to bring in additional revenue for the ag industry while increasing public awareness and engagement with the ag industry.

Rural broadband, another longtime focus of the ag community and the state as a whole, also received a boost through the budget. Lawmakers earmarked $372 million for internet infrastructure, with $250 million set aside for grants to build out infrastructure interconnecting networks between data centers and connections between internet providers and users. A lack of connectivity has been identified as a major detriment to Missourians as remote work and schooling became the norm amid the COVID-19 pandemic, but advancements in the farming industry -- such as the use of precision ag, which uses new technology to grow more crop without using as many resources -- largely rely on the internet as well.

The budget also includes line items for the Missouri State Fair, the state's largest agricultural showcase. Funds were approved for equipment upgrades and the acquisition of new land to expand the Sedalia fairgrounds, with plans in the works to construct a new event area and additional campsites.

Finally, the Legislature passed eminent domain reform after around a decade of commitments from state executives and legislative leaders. Under a new bill, electrical transmission line projects would be required to provide half or more of their electrical load to Missouri consumers to be considered a public service and allowed to condemn property for eminent domain. The language also set a floor of 150 percent of fair market value for properties to be taken by eminent domain, along with various other property protections.

The bill was a response to a multi-state transmission line project that has seen pushback from property owners for its use of eminent domain -- the ability of the government to take private property for public use following fair compensation to landowners -- to take and use their land, a practice MOFB has been at the forefront of opposition to over the past several years.

All of these measures are awaiting Gov. Mike Parson's signature to be codified in law.

Another victory the group claims is the failure of another proposal to make it across the finish line. The state Senate cut a line item that would have put almost $70 million in federal recovery funds toward the development of the Rock Island Trail, a cross-state trail along the former railroad corridor that would cross through several Mid-Missouri communities, including Jefferson City, Eugene and Eldon. MOFB said there were landowners along the trail that also opposed the proposed trail.

Agriculture is the state's largest industry, employing around 460,000 Missourians and bringing in a projected $4.3 billion in revenues last year, a record for the state. Missouri ranks second for the number of farms, according to the Department of Agriculture.