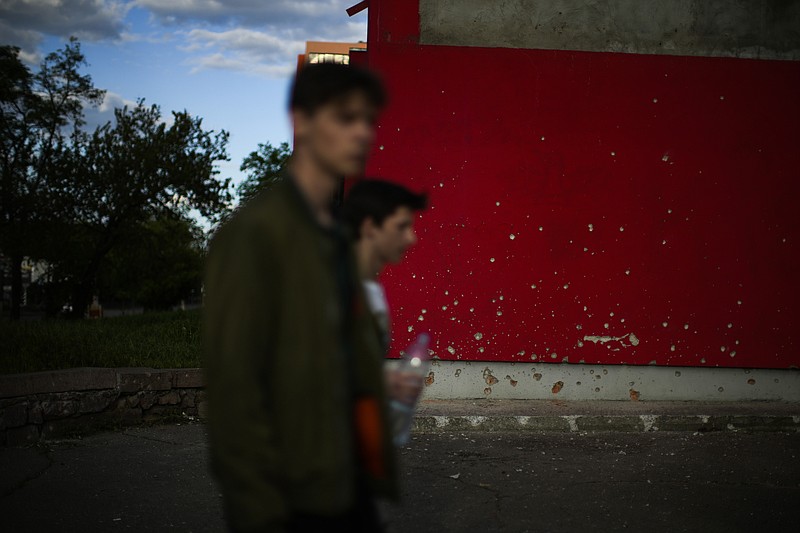 Youngsters walk past a wall scarred by shrapnel after a bombing earlier in the day in Mykolaiv, Ukraine, Monday, May 16, 2022. (AP Photo/Francisco Seco)

KYIV, Ukraine (AP) -- Moscow suffered another diplomatic setback Monday in its war with Ukraine, with Sweden joining Finland in deciding to seek NATO membership, while Ukraine's president congratulated his soldiers who reportedly pushed back Russian forces near the border.

Russian forces pounded targets in the industrial heartland of eastern Ukraine known as the Donbas and the death toll, already many thousands, continued to climb with the war set to enter its 12th week on Wednesday.

The eastern city of Sievierdonetsk came under heavy shelling, with at least 10 people killed, said Serhiy Haidai, the governor of the Luhansk region. In the Donetsk region, Gov. Pavlo Kyrylenko said on Facebook that nine civilians were killed in shelling there.

But Ukrainian troops also advanced as Russian forces pulled back from around the northeastern city of Kharkiv in recent days. Ukrainian President Volodymyr Zelenskyy thanked his forces who reportedly pushed all the way to the Russian border in the Kharkiv region in a symbolic gain.

Video showed Ukrainian soldiers carrying a post that resembled a Ukrainian blue-and-yellow-striped border marker. Then they placed it on the ground while a dozen of the soldiers posed next to it, including one with belts of bullets draped over a shoulder.

The Ukrainian border service said the video was from the border "in the Kharkiv region," but would not elaborate, citing security reasons. It was not immediately possible to verify the exact location.

Ukrainian border guards said they also stopped a Russian attempt to send sabotage and reconnaissance troops into the Sumy region, some 90 miles northwest of Kharkiv.

Russia has been plagued by setbacks in the war, most glaringly in its failure early on to take the capital of Kyiv. Much of the fighting has shifted to the Donbas but also has turned into a slog, with both sides fighting village-by-village.

Howitzers from the U.S. and other countries have helped Kyiv hold off or gain ground against Russia, a senior U.S. defense official said. The official, who spoke on condition of anonymity to discuss the U.S. military assessment, said Ukraine has pushed Russian forces to within a half-mile to 2.5 miles of Russia's border but could not confirm if it was all the way to the frontier.

The official said Russian long-range strikes also appeared to target a Ukrainian military training center in Yavoriv, near the Polish border. There were no immediate reports of casualties.

A glimmer of hope emerged for wounded Ukrainian troops trapped in the remains of a giant steel plant, the last stronghold of resistance in the shattered port city of Mariupol. The Russian Defense Ministry announced an agreement for the wounded to leave the steelworks for treatment in a town held by pro-Moscow separatists.

There was no immediate confirmation from the Ukrainian side, and there was no word on whether the wounded would be considered prisoners of war.

The international response to the Russian invasion picked up pace.

Sweden said it will seek NATO membership, following a similar decision from its neighbor Finland in a historic shift for the counties, which were nonaligned for generations.

Swedish Prime Minister Magdalena Andersson said her country would be in a "vulnerable position" during the application period and urged her fellow citizens to brace themselves.

"Russia has said that that it will take countermeasures if we join NATO," she said. "We cannot rule out that Sweden will be exposed to, for instance, disinformation and attempts to intimidate and divide us."

But President Recep Tayyip Erdogan of Turkey, a NATO member, ratcheted up his objection to their joining. He accused the countries of failing to take a "clear" stance against Kurdish militants and other groups that Ankara considers to as terrorists, and of imposing military sanctions on Turkey.

He said Swedish and Finnish officials who are expected in Turkey next week should not bother to come if they intend to try to convince Turkey of dropping its objection.

"How can we trust them?" Erdogan asked at a joint news conference with the visiting Algerian president.

All 30 current NATO members must agree to let the Nordic neighbors join.

Russian President Vladimir Putin said Moscow "does not have a problem" with Sweden or Finland as they apply for NATO membership, but that "the expansion of military infrastructure onto this territory will of course give rise to our reaction in response."

Putin launched the invasion on Feb. 24 in what he said was an effort to check NATO's expansion but has seen that strategy backfire, NATO Secretary-General Jens Stoltenberg has said the membership process for both could be quick.

Europe is also working to choke off funding for the Kremlin's war by reducing the billions of dollars it spends on imports of Russian energy. A proposed EU embargo faces opposition from some countries dependent on Russian imports, including Hungary, the Czech Republic and Slovakia. Bulgaria also has reservations.

"We will do our best in order to deblock the situation," EU foreign policy chief Josep Borrell said. "I cannot ensure that it is going to happen because positions are quite strong."

Also Monday, McDonald's said it has started selling its business in Russia, ending a relationship that has lasted more than three decades. It cited the humanitarian crisis caused by the war, noting that staying in Russia "is no longer tenable, nor is it consistent with McDonald's values." The company was the first fast-food restaurant to open in the Soviet Union. 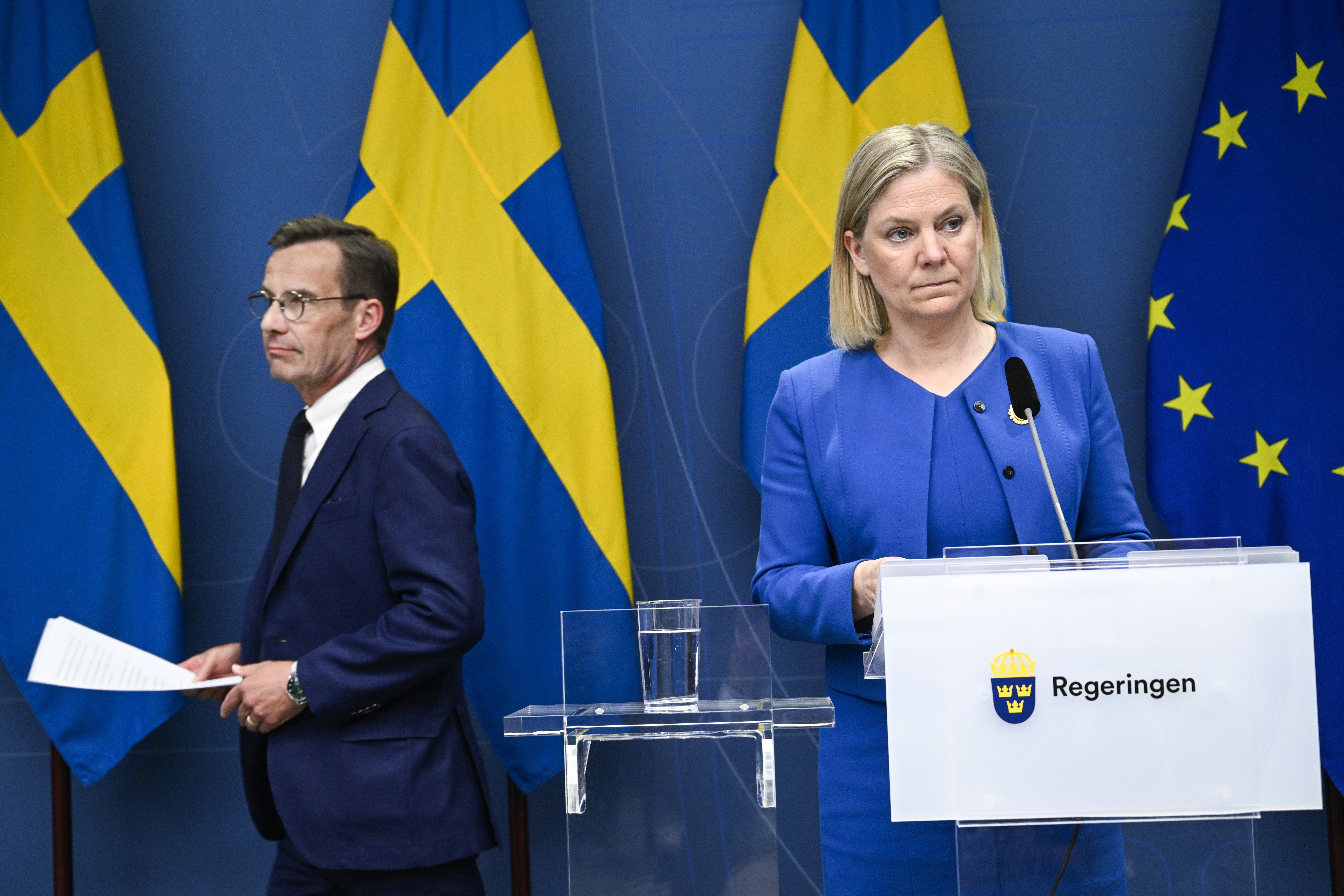 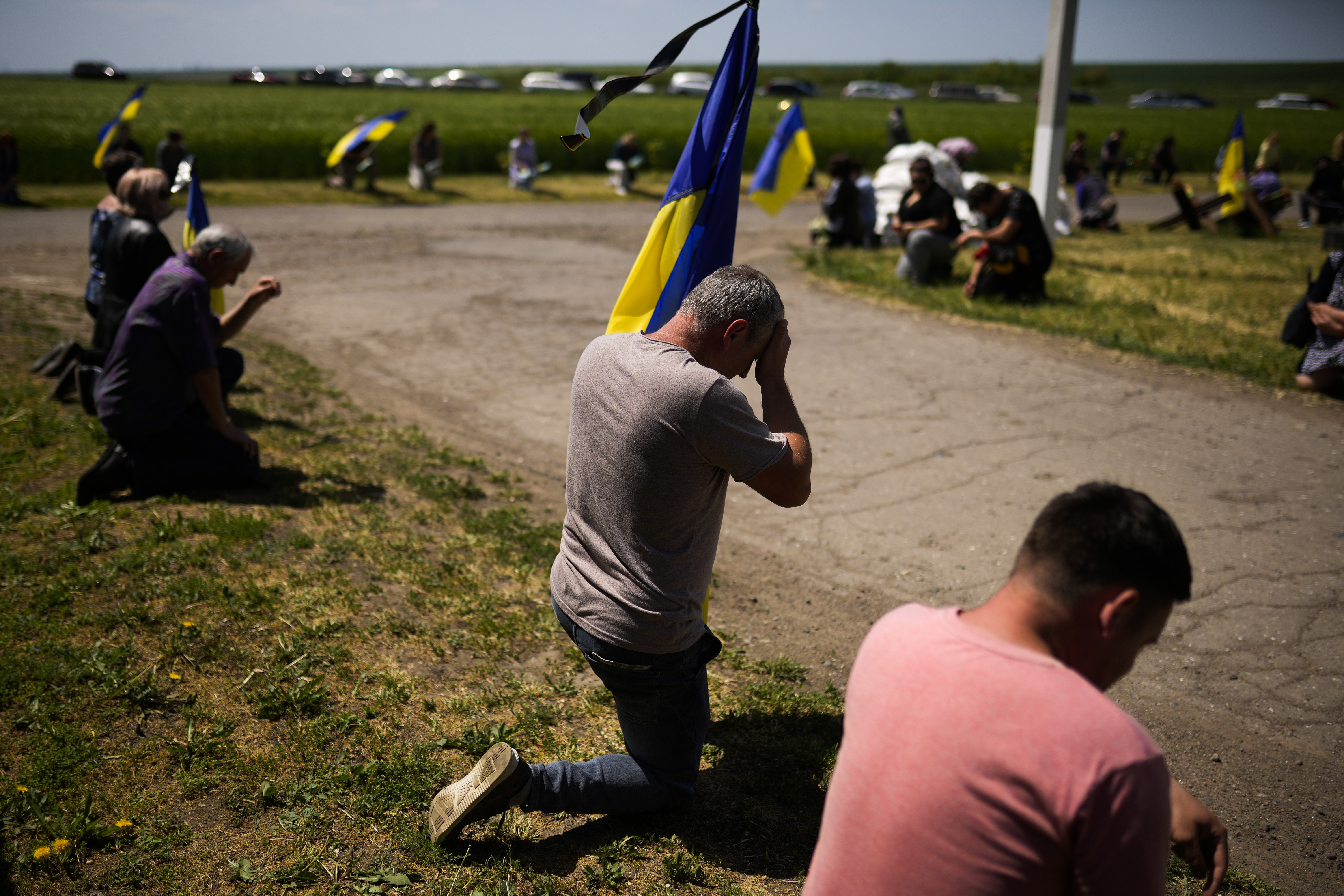 Mourners kneel as they await the coffin of Volodymyr Losev, 38, to pass by during his funeral in Zorya Truda, Odesa region, Ukraine, Monday, May 16, 2022. Volodymyr Losev, a Ukrainian volunteer soldier, was killed May 7 when the military vehicle he was driving ran over a mine in eastern Ukraine. (AP Photo/Francisco Seco) 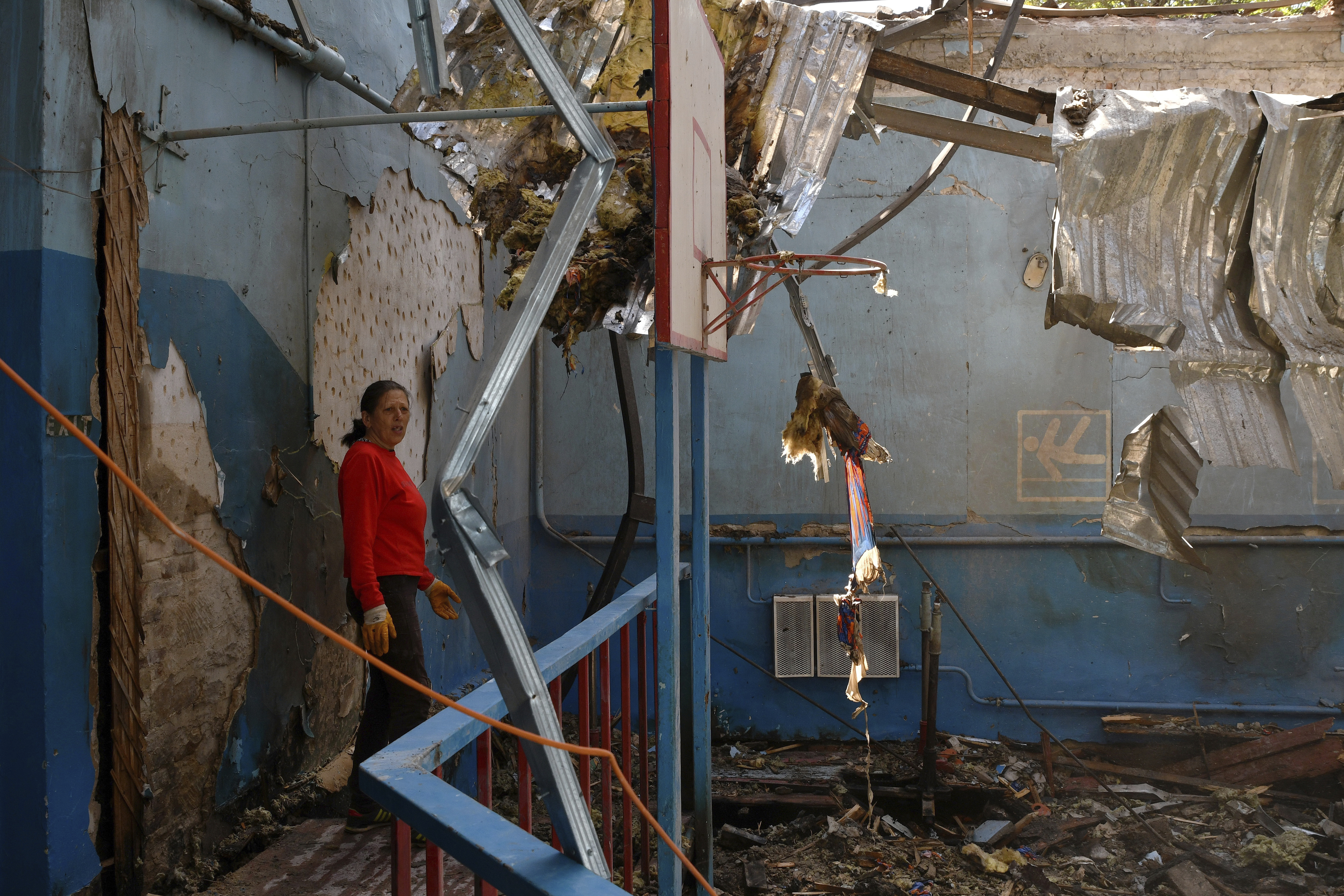 A sports teacher stands in a destroyed gymnasium of a school after Russian shelling in the village of Druzhkivka, Donetsk region, Ukraine, Monday, May 16, 2022. (AP Photo/Andriy Andriyenko) 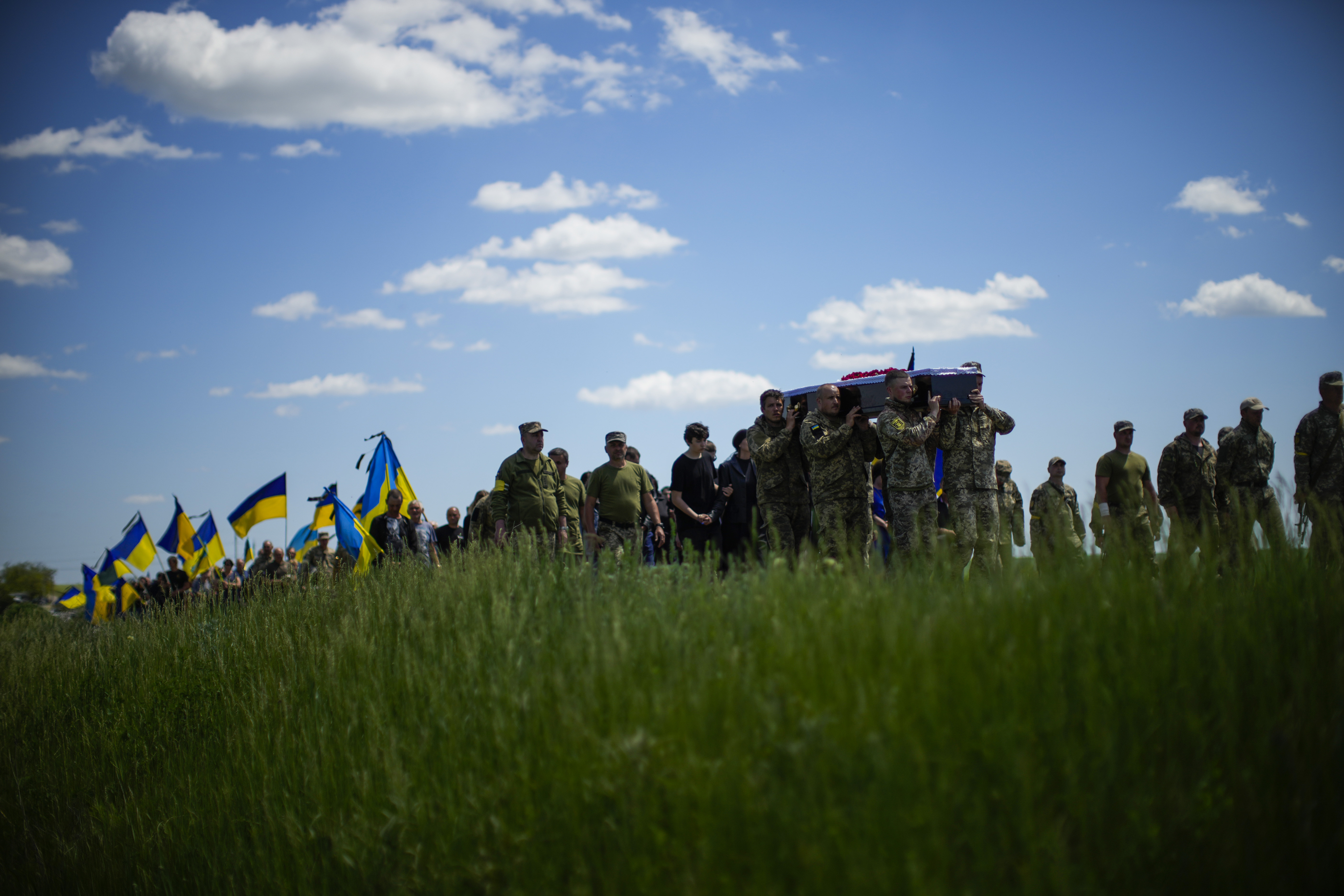 Ukrainian soldiers carry the coffin of Volodymyr Losev, 38, during his funeral in Zorya Truda, Odesa region, Ukraine, Monday, May 16, 2022. Volodymyr Losev, a Ukrainian volunteer soldier, was killed May 7 when the military vehicle he was driving ran over a mine in eastern Ukraine. (AP Photo/Francisco Seco) 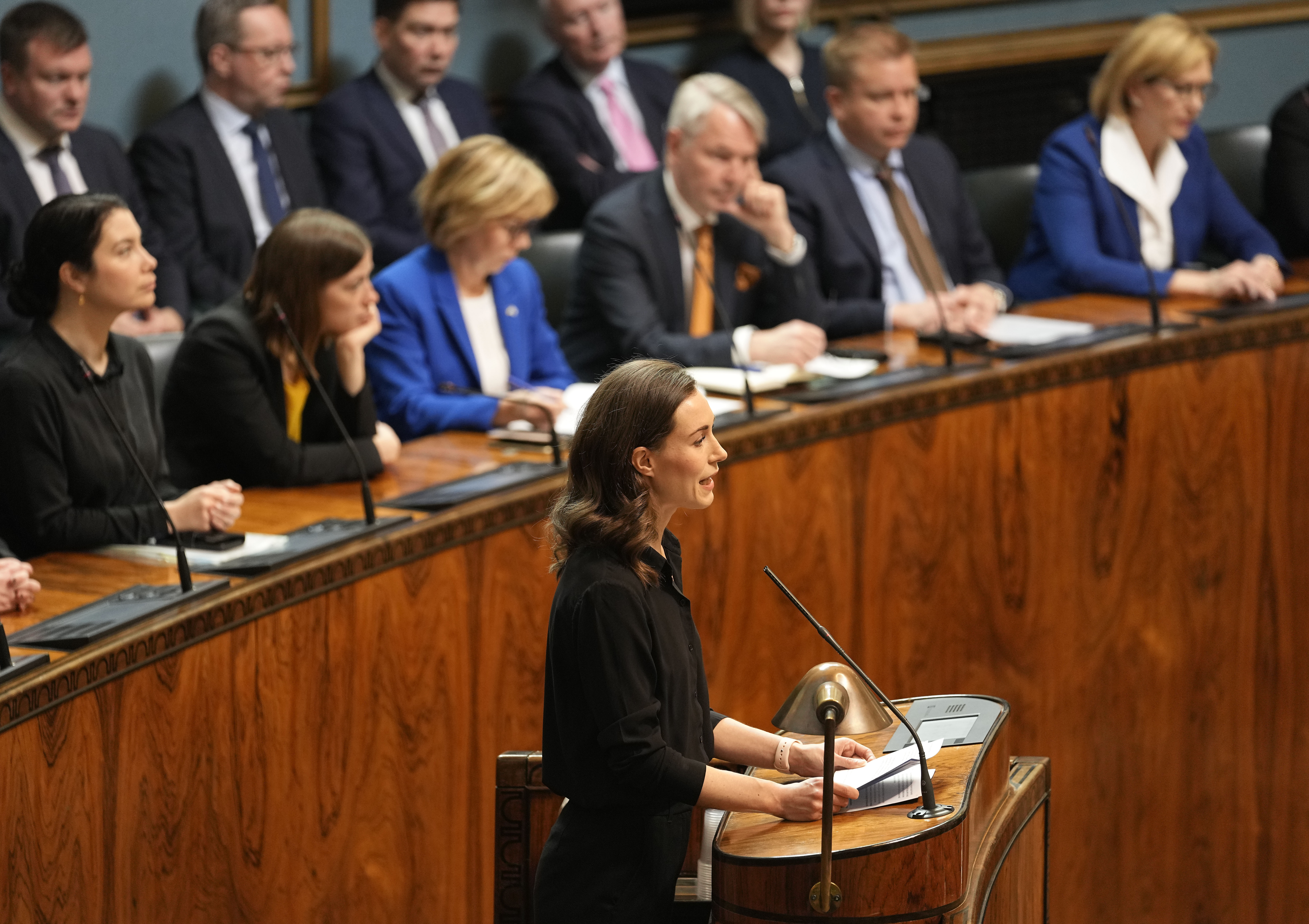 Prime Minister of Finland Sanna Marin talks in front of government members at the Finnish Parliament in Helsinki, Finland, Monday, May 16, 2022. Finland's lawmakers debate about rapidly applying for NATO membership, paving the way for a historic expansion of the alliance that could deal a serious blow to Russia as its military struggles with its war in Ukraine. (AP Photo/Martin Meissner) 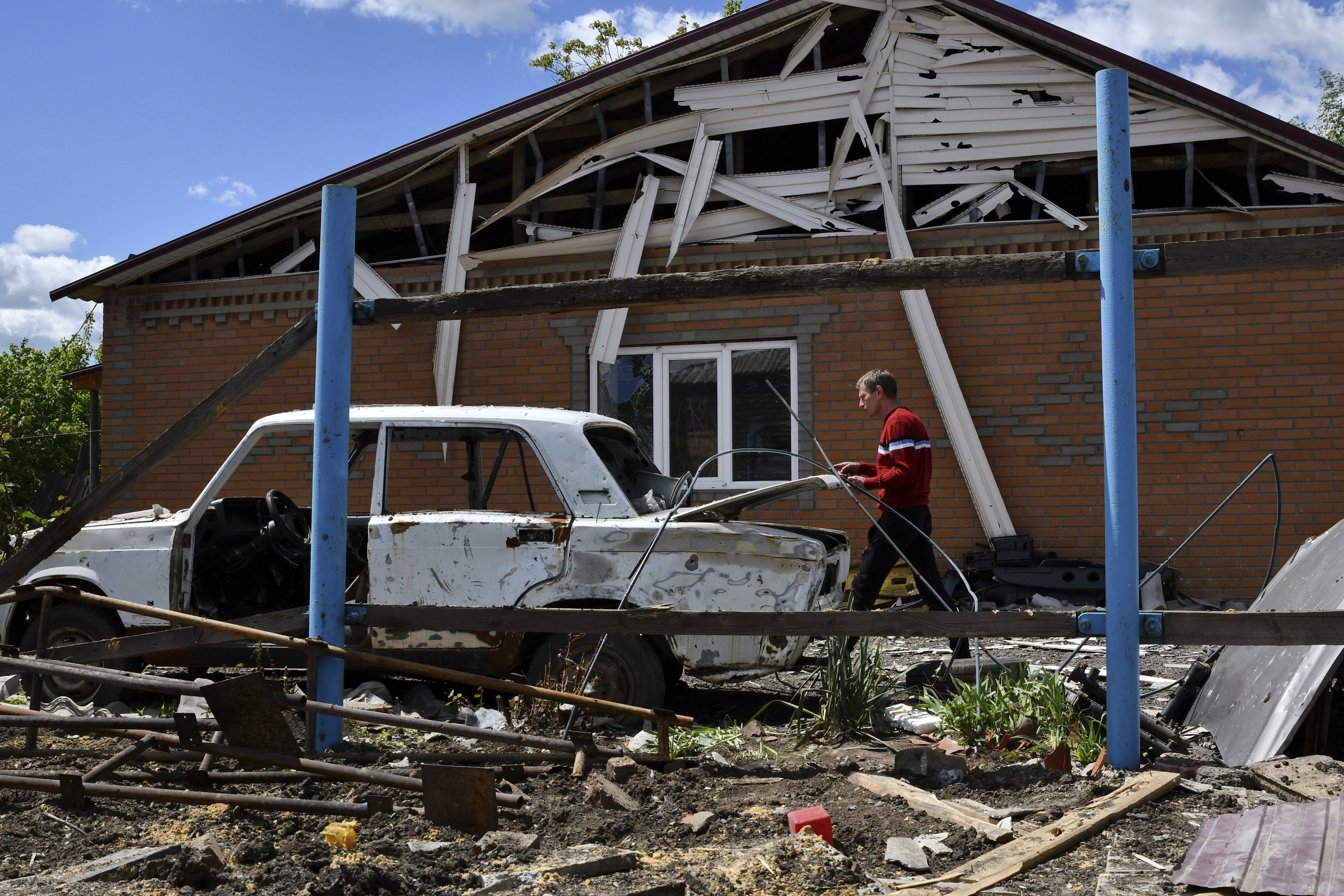 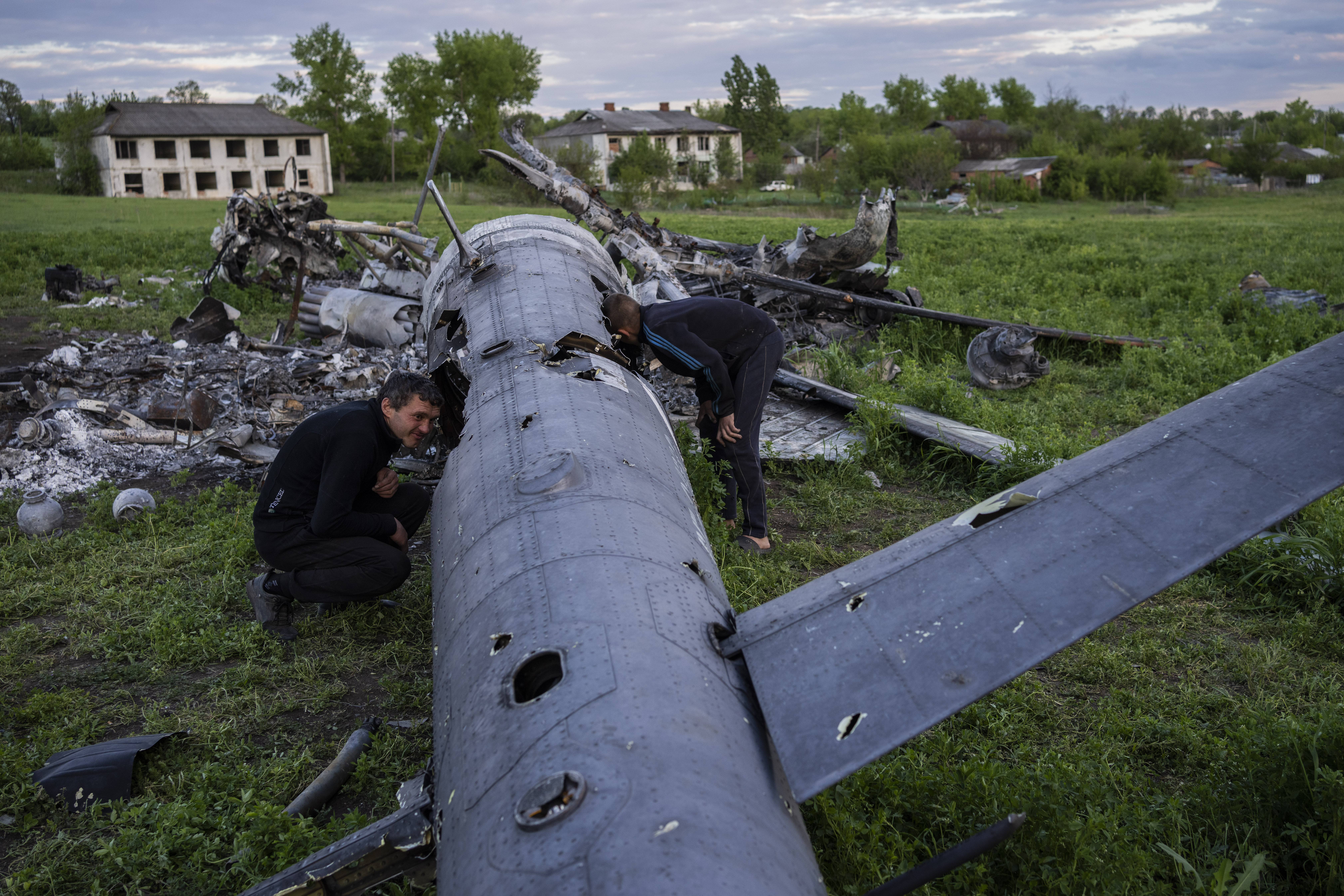 Oleksiy Polyakov, right, and Roman Voitko check the remains of a destroyed Russian helicopter lie in a field in the village of Malaya Rohan, Kharkiv region, Ukraine, Monday, May 16, 2022. (AP Photo/Bernat Armangue) 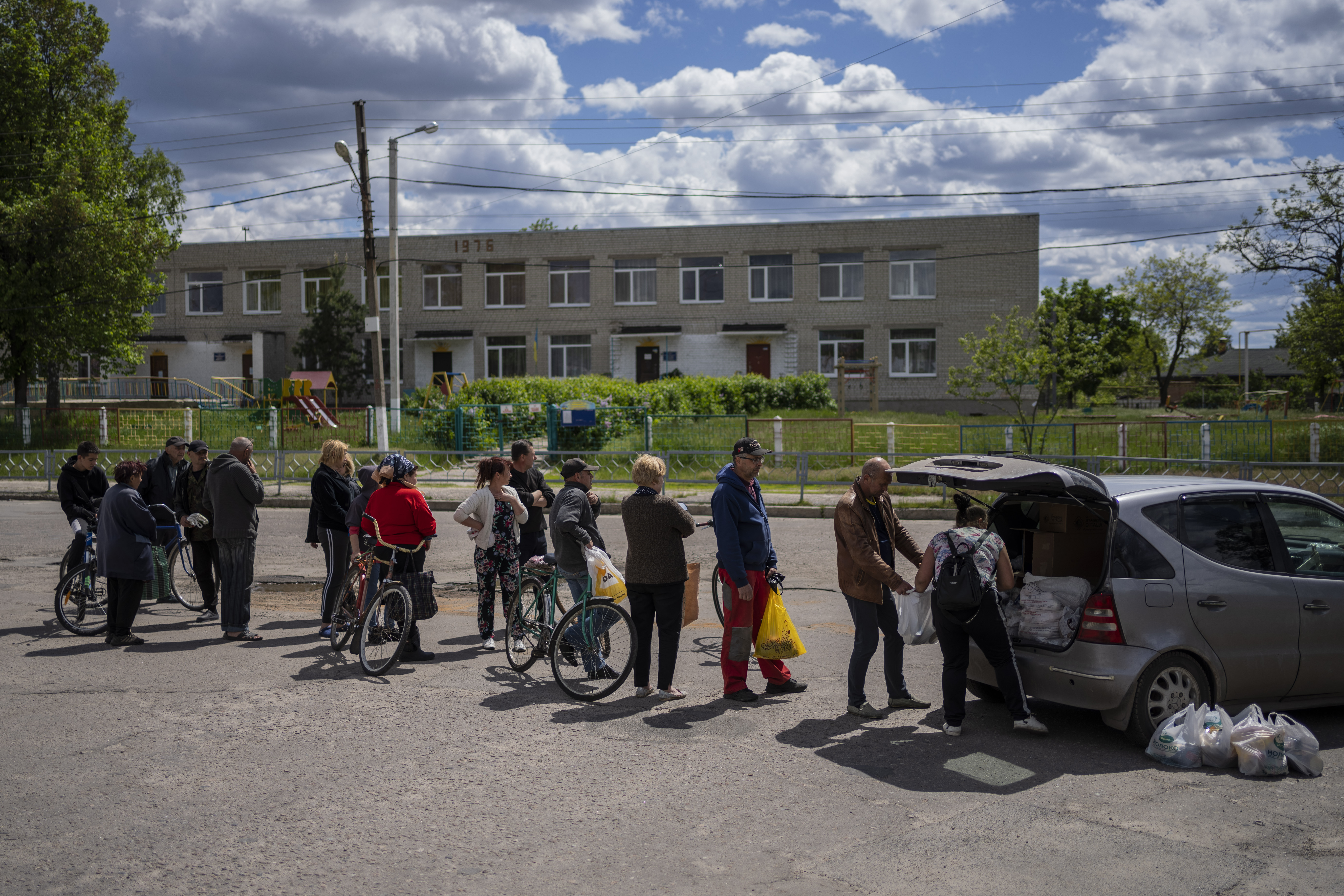 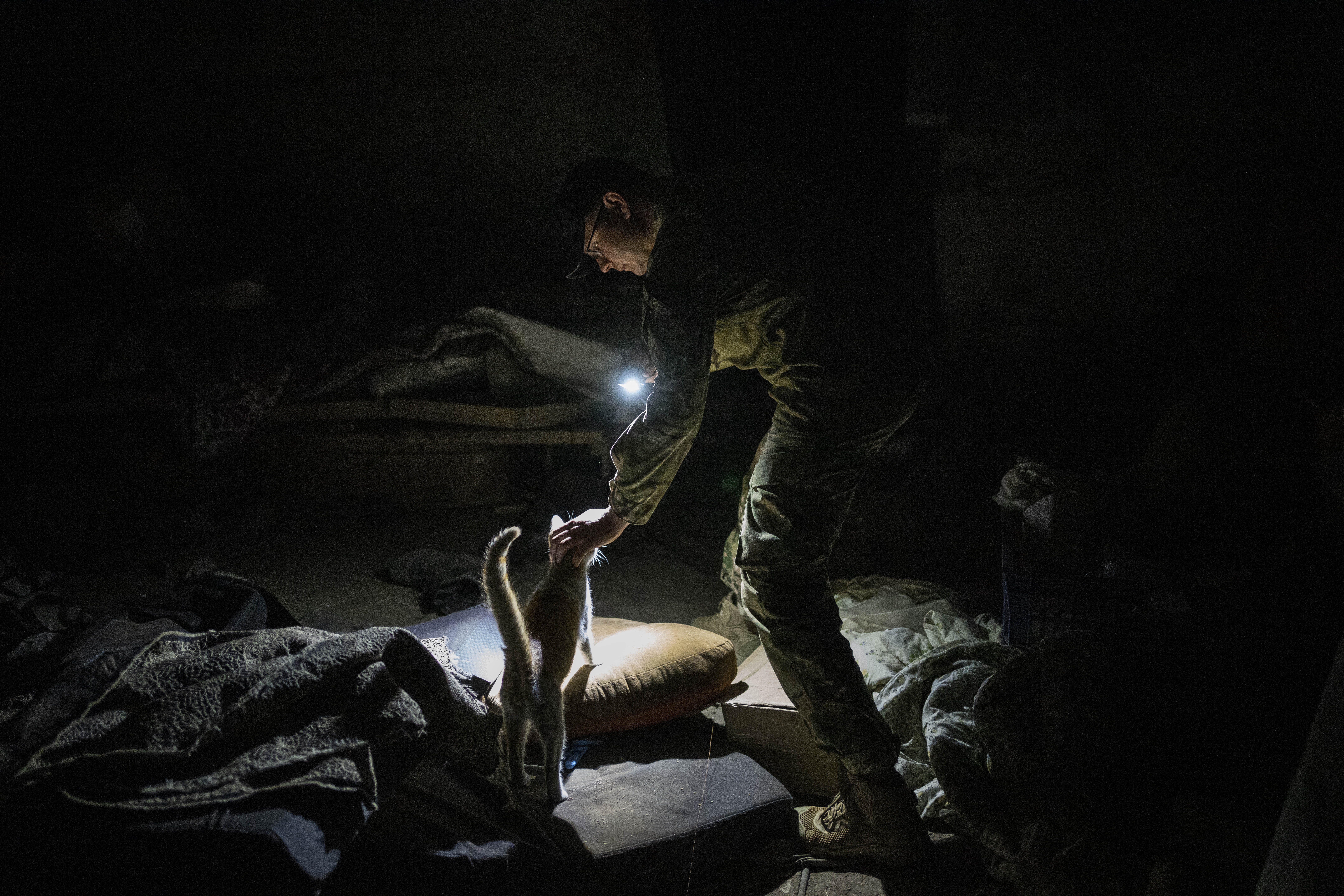 Ukrainian serviceman Anton pets a cat in a basement previously used by Russian soldiers as a temporary base in the village of Malaya Rohan, Kharkiv region, east Ukraine, Monday, May 16, 2022. (AP Photo/Bernat Armangue)