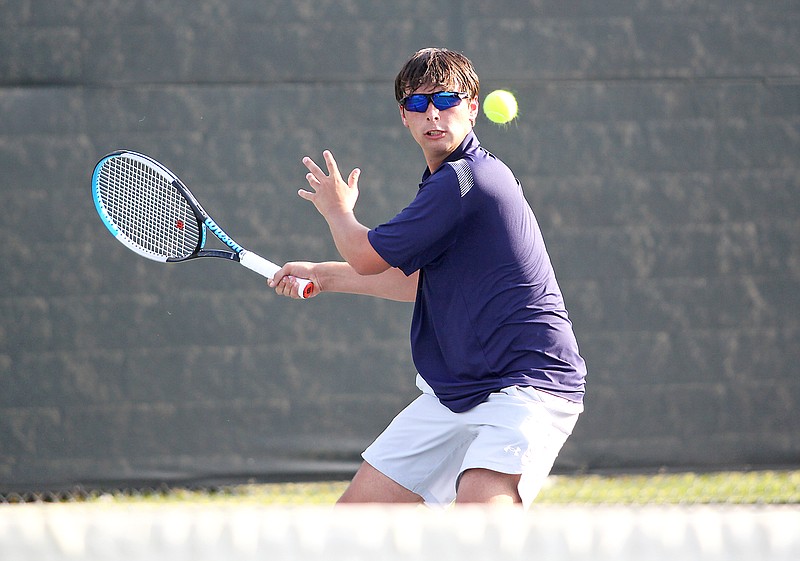 Caleb Mueller of Helias watches the ball before hitting a shot during his singles match against Capital City in the Class 2 District 5 Tournament championship dual last Wednesday at the Crusader Athletic Complex. (Greg Jackson/News Tribune)

The Crusaders travel to Kansas City to play Barstow in the Class 2 team state quarterfinals. The dual is slated to start at 4 p.m.

Helias (17-2) won the District 5 Tournament to advance to the state tournament. The Crusaders picked up a 5-0 semifinal win last Tuesday against Jefferson City, then topped Capital City 5-1 in Wednesday’s title dual, both at the Crusader Athletic Complex.

The winner of today’s dual advances to the Class 2 Final Four, where it awaits a semifinal matchup against either Cape Girardeau Central (9-6) or Priory (11-0) on May 27 at the Cooper Tennis Complex in Springfield.

After today’s dual, Helias’ tennis season continues Thursday in Springfield for the Class 2 individual state championships. Ethan Foucheaux will be one of 16 players vying for a state singles title, while Andrew Dowden and Caleb Mueller will compete in the state doubles tournament for the Crusaders.