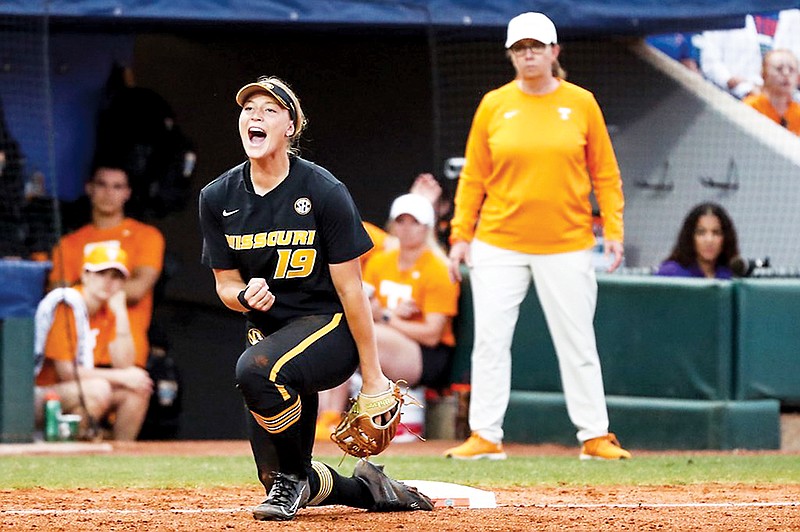 Kara Daly of Missouri starts to celebrate after throwing to first for the final out in Friday's win against Tennessee in the semifinals of the SEC Softball Tournament in Gainesville, Fla. (Hunter Dyke/Mizzou Athletics)

GAINESVILLE, Fla. -- The roll continues for the Missouri Tigers.

Jordan Weber pitched her second shutout in the SEC Softball Tournament on Friday, leading Missouri to a 3-0 victory in the semifinals against Tennessee.

Missouri got on the board in the top of the fourth inning on an opposite field solo home run by Kimberly Wert. The Tigers doubled their advantage in the fifth on a home run by Hatti Moore.

Before the fifth inning ended, the game was delayed by weather for two hours and 33 minutes.

Kara Daly (Jefferson City High School) added an insurance run with a long home run to left in the seventh inning. It was her 12th home run of the season.

Weber, who blanked Auburn 1-0 in Wednesday’s tournament opener, allowed six hits and no walks while striking out one.

This is Missouri’s second trip to the SEC Tournament title game. The Tigers finished second in 2013.

Arkansas advanced to the title game with a 4-1 victory against Florida in Friday’s second semifinal.