US inflation dips from 4-decade high but still causing pain 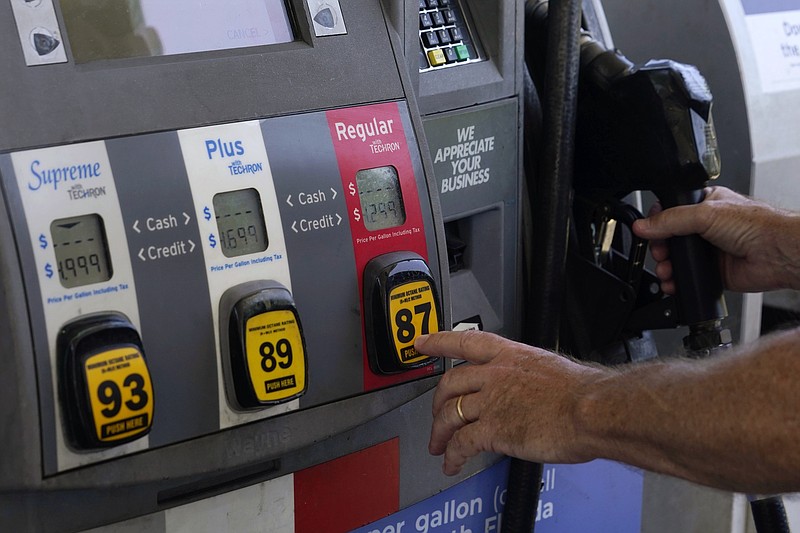 A customer pumps gas at an Exxon gas station, Tuesday, May 10, 2022, in Miami. U.S consumers have so far defied higher prices for gas, food, and rent and have been spending more in 2022, providing crucial support to the economy. How long that can continue will be one of the key factors affecting the economy and inflation this year. (AP Photo/Marta Lavandier)

WASHINGTON (AP) -- Inflation eased slightly in April after months of relentless increases but remained near a four-decade high, making it hard for millions of American households to keep up with surging prices.

Consumer prices jumped 8.3 percent last month from a year ago, the government said Wednesday. That was below the 8.5 percent year-over-year surge in March, which was the highest since 1981. On a monthly basis, prices rose 0.3 percent from March to April, the smallest rise in eight months.

Still, Wednesday's report contained some cautionary signs that inflation may be becoming more entrenched. Excluding the volatile food and energy categories, so-called core prices jumped twice as much from March to April as they did the previous month. The increases were fueled by spiking prices for airline tickets, hotel rooms and new cars. Apartment rental costs also kept rising.

Those price jumps "make clear that there is still a long way to go before inflation returns to more acceptable levels," said Eric Winograd, U.S. economist at asset manager AB.

Even if it moderates, inflation will likely remain high well into 2023, economists said, leaving many Americans burdened by price increases that have outpaced pay raises. Especially hurt are lower- income and Black and Hispanic families, who on average spend a greater proportion of their incomes on gas, food and rent.

Wednesday's report also underscored the challenges for the Federal Reserve and White House in their struggles to tame inflation.

In April, a fallback in gas prices helped slow overall inflation. Nationally, average prices for a gallon of gas fell to as low as $4.10 in April, according to AAA, after having spiked to $4.32 in March. But since then, gas prices have surged to a record $4.40 a gallon.

Grocery prices, too, are still soaring, in part because Russia's invasion of Ukraine has heightened the cost of wheat and other grains. Food prices rose 1 percent from March to April and nearly 11 percent from a year ago. That year-over-year increase is the biggest since 1980.

Such rapid inflation has led many Americans to cut back on spending. Among them is Patty Blackmon, who said she's been driving to fewer of her grandchildren's sports events since gas spiked to $5.89 in Las Vegas, where she lives.

To save money, Blackmon, 68, also hasn't visited her hairdresser in 18 months. And she's reconsidering her plan to drive this summer to visit relatives in Arkansas. She was shocked recently, she said, to see a half-gallon of organic milk reach $6.

"Holy cow!" she thought. "How do parents give their kids milk?"

Blackmon has cut back on meat, and "a steak is almost out of the question," she said. Instead, she is eating more salads and canned soups.

Likewise, David Irby, of Halifax, Virginia, said he's been cutting back on food and other higher- cost expenses. A veteran who retired on disability in 2015, Irby, 57, said he has switched to chicken from beef and quit buying bacon or junk food, like his favorite treat, Cheetos.

Turmoil overseas could potentially accelerate inflation in the coming months. If the European Union, for example, decides to bar imports of Russian oil, world oil prices could rise. So could U.S. gas prices. And China's COVID-19 lockdowns could worsen supply chain snarls.

In April, airfares soared a record 18.6 percent, the largest monthly increase since record-keeping began in 1963. And hotel prices jumped 1.7 percent from March to April.

Southwest Airlines said last month that it foresees much higher revenue and profits this year as Americans flood airports after having postponed travel for two years. Southwest said its average fare soared 32 percent in the first three months of the year from the same period last year.

There are, though, signs supply chains are improving for some goods. Wednesday's report showed prices for appliances and clothing both fell 0.8 percent, while the cost of used cars dropped 0.4 percent, the third straight decline. Used cars and other goods drove much of the initial inflation spike last year as Americans stepped up spending after vaccines became widespread.

On Tuesday, Biden sought to take the initiative and declared inflation "the No. 1 problem facing families today" and "my top domestic priority."

Previous signs U.S. inflation might be peaking didn't last. Price increases decelerated last August and September, suggesting at the time that higher inflation might be temporary, as many economists -- and officials at the Fed -- had suggested. But prices shot up again in October, prompting Fed Chair Jerome Powell to start shifting policy toward higher rates.

Wednesday's figures will keep the Fed on track to implement what may become its fastest series of interest rate increases in 33 years, economists said. Last week, the central bank raised its benchmark short-term rate by a half-point, its steepest increase in two decades. And Powell signaled that more such sharp rate hikes are coming.

The Powell Fed is seeking to pull off the notoriously difficult -- and risky -- task of cooling the economy enough to slow inflation without causing a recession. Economists say such an outcome is possible but unlikely with inflation this high.

One of the Fed's concerns is that Americans might start to expect chronically high inflation, which can make rising prices harder to bring under control because such expectations can be self-fulfilling. If Americans expect costs to rise, they will likely demand higher pay. Those higher labor costs, in turn, can force companies to charge more, thereby heightening inflation.

So far, measures of longer-term inflation expectations have stayed largely in check even as prices have soared. Still, some people are starting to push for higher wages as prices rise.

"We haven't had raises yet based on inflation, and we think we should because now inflation is so high," Rochelle Guillou, 26, said, referring to her and her friend Hannah Lerman, who work at a startup in Boston.

Lerman, 25, said she thinks the cost of everything from food to online delivery services to clothes is on the way up.

"Rent is a huge issue," she said. "They're actually trying to sell my building right now, so we know our rent is going to go up. We don't even know how much but yeah, rent is going crazy." 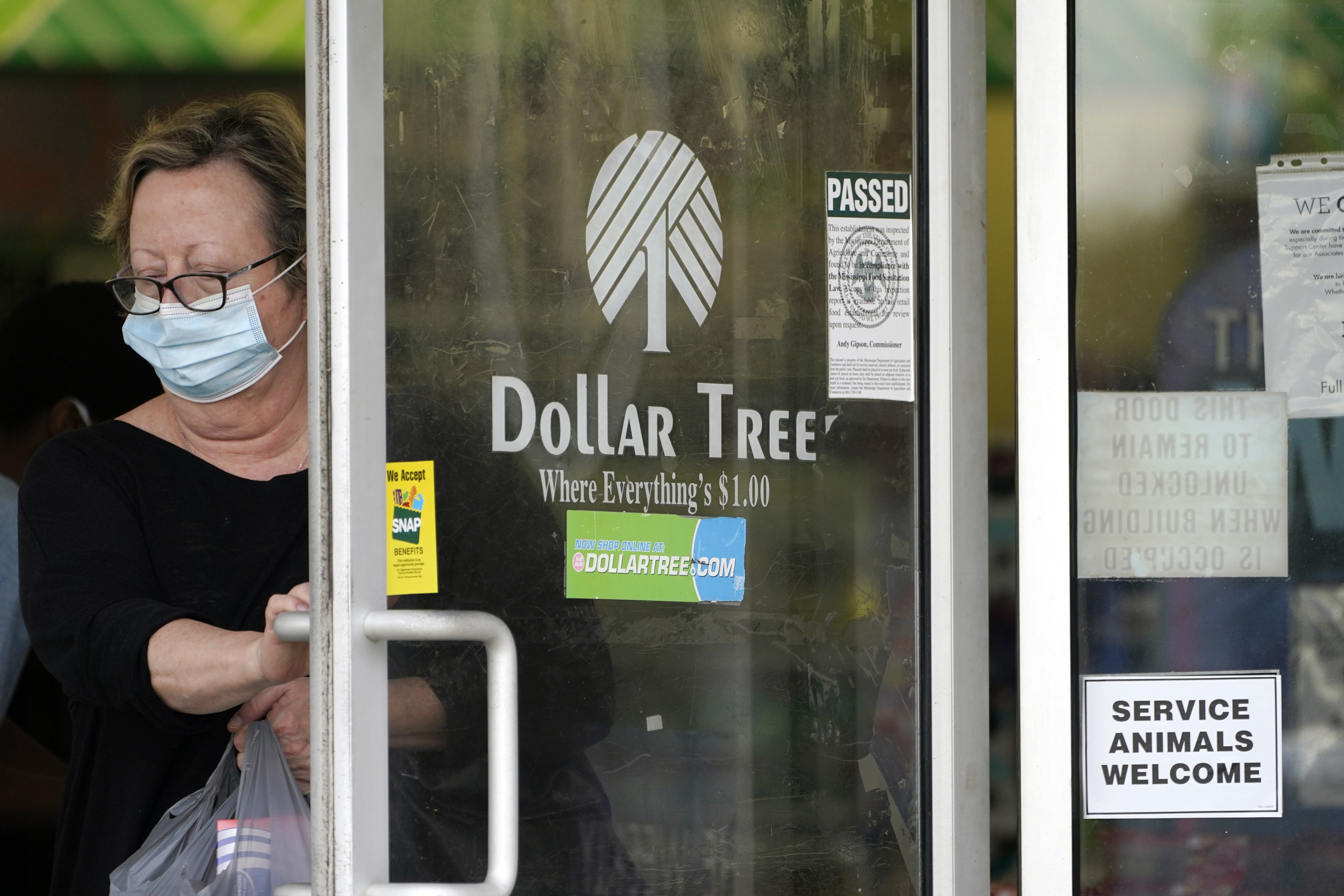 A customer exits a Dollar Tree store that touts everything in the store is for $1, Thursday, Feb. 25, 2021, in Jackson, Miss. U.S consumers have so far defied higher prices for gas, food, and rent and have been spending more in 2022, providing crucial support to the economy. How long that can continue will be one of the key factors affecting the economy and inflation this year. (AP Photo/Rogelio V. Solis) 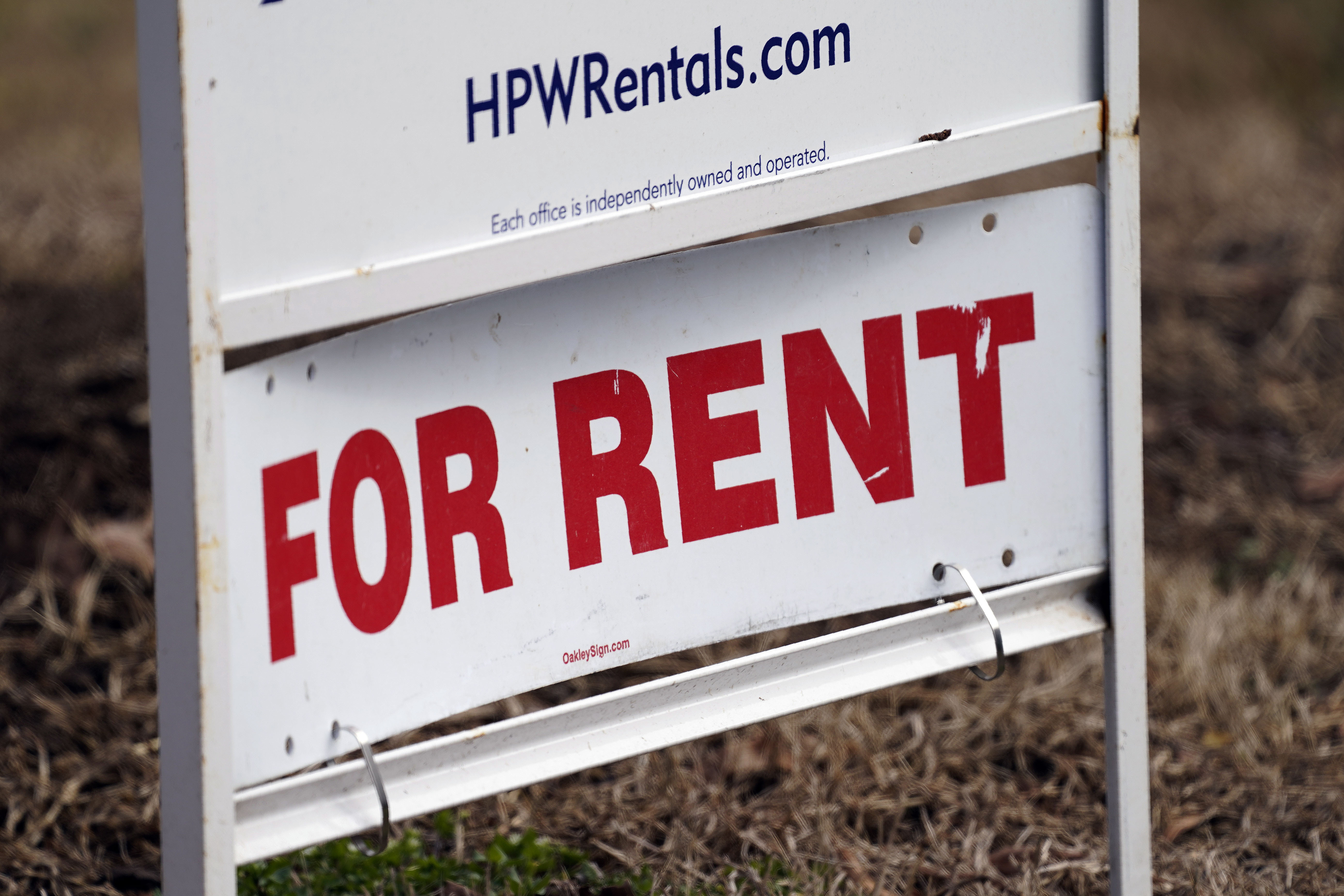 A "For Rent" sign is displayed along a neighborhood street in Mebane, N.C., Wednesday, Feb. 10, 2021. U.S consumers have so far defied higher prices for gas, food, and rent and have been spending more in 2022, providing crucial support to the economy. How long that can continue will be one of the key factors affecting the economy and inflation this year. (AP Photo/Gerry Broome) 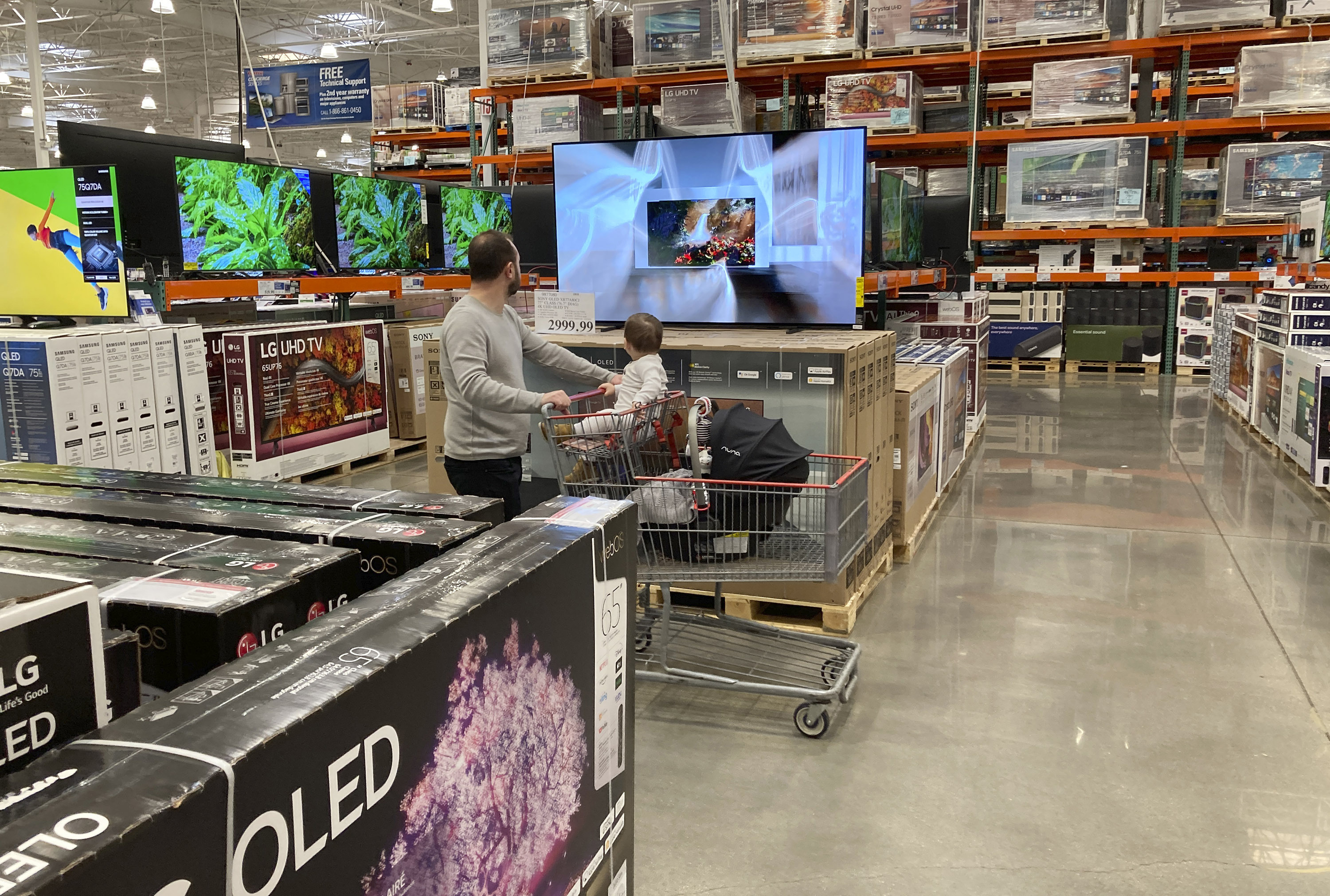 A shopper pushes a child in a cart while browsing big-screen televisions on display in the electronics section of a Costco warehouse, Tuesday, March 29, 2022, in Lone Tree, Colo. U.S consumers have so far defied higher prices for gas, food, and rent and have been spending more in 2022, providing crucial support to the economy. How long that can continue will be one of the key factors affecting the economy and inflation this year. (AP Photo/David Zalubowski)