Faithful gather for comfort, direction on National Day of Prayer 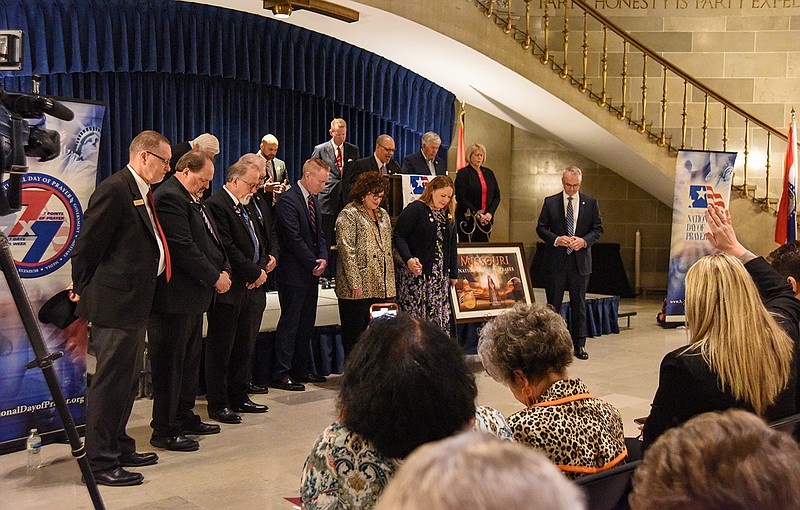 Julie Smith/News Tribune National Day of Prayer coordinator Keith Belton, says a prayer over Gov. Mike Parson and other elected officials in attendance Thursday during a prayer service in the Capitol Rotunda.

Rep. Sara Walsh stood at the back of a small crowd in the Capitol Rotunda, praying and singing with them early Thursday afternoon.

She's been a regular there, during the National Day of Prayer, held the first Thursday of May each year.

This year, prayer was especially meaningful for her.

"My mom was a prayer warrior," Walsh said. "And she posted Bible verses up throughout our house."

For every difficult time in her life, Walsh said, whether it was drama from day-to-day living, going through a factory layoff at the Maytag plant, working long hours going to school full time and maintaining a job, the loss of a brother to suicide, or last year's loss of her husband to COVID-19, she was able to turn to Jesus.

"By being able to lean on my faith, by leaning on Jesus, it has given me strength," she said. "The Bible says he'll give us the peace that surpasses all understanding.

"I never really experienced that fully until last year, with the loss of my spouse."

She prayed for Steve, but knew God's will will be done.

"Faith is so important -- where you're going to be after this life," Walsh said. "My faith is in my lord and savior, Jesus Christ. My husband Steve's was as well. Having that knowledge of knowing I'm going to get to go see him one day makes all the difference in the world."

In the Legislature, she continued, no one can have the wisdom needed to bear the burdens of the people they serve and listen to their concerns -- to have wisdom to solve the bigger problems they face -- without leaning on a higher power.

"He had a life of sorrows. He said many times he'd been driven to his knees by the realization there was no other place to go," she said. "The worries around him, and the wisdom around him was not sufficient. He knew he had to reach out to the Lord in prayer. That's what I have found in every job, but especially as a public servant. Seeking God to try to make the wisest decisions and the most Godly decisions, that would be a blessing to the people."

Bob Vanden Bosch, of Fulton, from Concerned Christian Ministries, who prayed for churches during the event, focused on three things.

"First of all, we have strong churches when we pray. Secondly, just as the walls are coming down in Ukraine, the devil wants to break down the walls of the church," Vanden Bosch said. "Third, don't despair, Jesus said, 'I will build my church, and the gates of hell shall not prevail against it.'"

He prayed that those gathered would thank God for his love and forgiveness. He thanked God for the assurance of eternal life through Jesus Christ.

He prayed members of churches would turn their hearts to him, that they respond to the working of the Holy Spirit.

He thanked God for sending the "comforter" to us -- "to strengthen us, to lead us, to guide us and direct us through our lives."

Parson said he could not imagine being the governor of the state of Missouri without having faith.

"I cannot believe you could do this job without a foundation of right and wrong," Parson said.

If you stacked the bills people have proposed in the Legislature beside him, they'd be as high as he is tall, he said.

"If we all lived by the Bible, you wouldn't need all these big ol' stacks of man-made papers," he said. "So a lot of things to be praying about right now ... what's going on in the Supreme Court of the United States. How about we get that changed? It's been over 50 years."

He said all of those people in leadership positions should be fighting for children and to assure others get the privileges they've had.

The country is divided, he said. The only thing that could pull it back together is prayer.

Do not give up, he told listeners. He told them they need to wear on their sleeves what they believe in.

The past couple years, the governor said he has tried to figure out how to balance decisions.

"So many times, you have to make decisions that were uncharted waters to almost a certain degree. You had to do it. There was nobody else to get guidance from," Parson said. "There was no internet to look on and get answers from. You had to go back to those fundamental beliefs -- the values you learned in church and what it was between right and wrong."

So many times, Parson said, as he had to make decisions, people approached him and told him they were praying for him.

"They were at times I had to make decisions for the people of this state," Parson said, "and I couldn't do it without people praying for me and her, and for the job we had to do."