Dozens of coots Monday called Binder Lake home, where they spent time bobbing up and down on the water's surface as the gusty winds caused considerable wave action on the lake. Many people mistake them for ducks. However, they are only distantly related to the more common waterfowl. (Julie Smith/News Tribune)

The Missouri Department of Conservation finalized 2022 hunting seasons for a variety of Missouri game last week, including bear, elk, migratory birds and waterfowl.

The state agency also expanded the season for furbearer hunting and trapping, taking note of stakeholder requests for enhanced opportunities.

After an inaugural season with 12 black bears killed, MDC is offering another 400 permits to hunt black bears in southern Missouri from Oct. 17-26.

Although 400 hunters can get a permit, a maximum of 40 bears can be hunted this fall. At least 10 percent of the permits are reserved for qualified landowners.

Hunters applying for a permit are required to select one of the state's three Black Bear Management Zones (BMZ). The permits are valid for public and private property in the BMZ.

In addition to the statewide quotas, each BMZ has its own permit and harvest quotas. Once the BMZ quota is reached, bear hunting in that zone concludes for the season.

BMZ 1, located in the southwest corner of the state south of Joplin, Springfield and West Plains, has the largest quotas with permits capped at 200 and harvest limited to 20 bears.

BMZ 2, located in the southeastern corner of the state and extending north past St. Louis, has a permit limit of 150 and harvest limited to 15 bears.

BMZ 3, located on the western edge and extending into central parts of the state, has capped permits at 50 and harvest to five bears.

Hunters must call MDC before each hunting day to determine if the BMZ they are permitted to hunt in is closed. Hunting hours are a half-hour before sunrise to a half-hour after sunset.

Permits allow hunters to harvest a maximum of one bear and only lone black bears can be taken, meaning hunters cannot hunt bears known to be in the presence of other bears such as female black bears with cubs. Bears cannot be disturbed, pushed, harassed or taken from dens.

MDC allows hunters chasing bears to use the same methods they would when hunting deer and elk, including firearms and archery. Bear hunters cannot use an atlatl, bait or dogs.

Missouri hunters at least 11 years old by the first day of hunt can begin applying for permits in May at mdc.mo.gov/buypermits. The application period is May 1-31 and permits are assigned by random drawing.

MDC is issuing five bull elk hunting permits with one reserved for qualifying land owners. The five permits are valid for both the archery and firearms portions.

Missouri hunters at least 11 years old by the first day of hunt can begin applying for permits in May at mdc.mo.gov/buypermits. The application period is open through May and permits are assigned by random drawing.

Hunters are required to pay an application fee of $10 and, if selected, buy the permit for $50.

All elk-hunting permits can be used in Carter, Reynolds and Shannon counties, except the refuge portion of Peck Ranch Conservation Area.

Hunters are allowed to use the same hunting methods as for deer hunting and permits allow for one bull elk with at least one 6-inch antler.

Many furbearers, which are mammals that have traditionally been trapped and hunted for their fur, are experiencing long-term population growth, according to the department.

MDC's hunting season for various migratory game birds largely begins in September, with hunting permitted half an hour before sunrise through sunset.

The hunting season for mourning doves, Eurasian collared doves and white-winged doves runs Sept. 1 through Nov. 29. Hunters can collect 15 birds a day for a season total of up to 45 birds across the three species.

The season for sora and virginia rails hunting is slightly shorter, running from Sept. 1 through Nov. 9. Hunters are capped at 25 birds per day and 75 total for harvesting the two species.

Missouri's season for wilson's (common) snipe also begins Sept. 1, but runs through Dec. 16. Hunters can harvest up to eight snipes a day for a maximum of 24 throughout the season.

The American woodcock season starts later, running Oct. 15 through Nov. 28. Hunters are limited to harvesting three woodcocks per day for a total of nine throughout the season.

MDC's hunting season for teal begins at sunrise Sept. 10 and goes through sunset Sept. 25. Hunters can bag up to six teals a day for a total of 18 birds during the season.

The hunting season for blue and white snow geese and Ross's geese runs Nov. 11 through Feb. 6, 2023. Hunters are limited to 20 blue, snow or Ross's geese per day with no total limit. Hunting can begin a half-hour before sunrise and continue until sunset. Hunters can use shotguns capable of holding more than three shells and recorded or amplified bird calls.

The U.S. Fish and Wildlife Service requires shells used to hunt waterfowl and coots to be nontoxic. MDC has 14 approved nontoxic shell types listed on its website.

White-fronted geese season also runs Nov. 11 through Feb. 6, 2023, but hunters are limited to harvesting two per day and having six in possession.

MDC's light goose conservation order runs Feb. 7, 2023, through April 30, 2023. It begins a half-hour before sunrise and continues until a half-hour after sunset. There are no daily or possession limits.

Missouri's duck season is divided between the state's north, middle and south zones. Hunting can occur half-hour before sunrise and continue until sunset.

Hunters are limited to six ducks per day with some harvest restrictions on species, including up to:

Coots follow the same season dates and zones as ducks. Hunters are limited to 15 coots per day and a total of 45 throughout the season.

Youth hunting is available for Missourians 15 years or younger. The youth hunting waterfowl season is Oct. 22-23 for the north and middle zones and Nov. 19-20 for the south zone.

Harvest limits and hunting hours for youth hunting are the same as the regular waterfowl season. Youth won't need a permit if they are under the supervision of an adult at least 18 years old. If youth are not certified in hunter education, their accompanying adult is required to carry a permit and proof of hunter education. Adults cannot hunt ducks but may participate in other seasons open on youth hunting days.

MDC's falconry season for doves runs Sept. 1 through Dec. 16. Beginning a half-hour before sunrise, hunters can bag up to three doves a day and have up to nine in possession. Hunting ends at sunset.

Hunters are limited to three birds per day and can have up to nine in possession during the regular duck-hunting seasons and the extended falconry seasons. 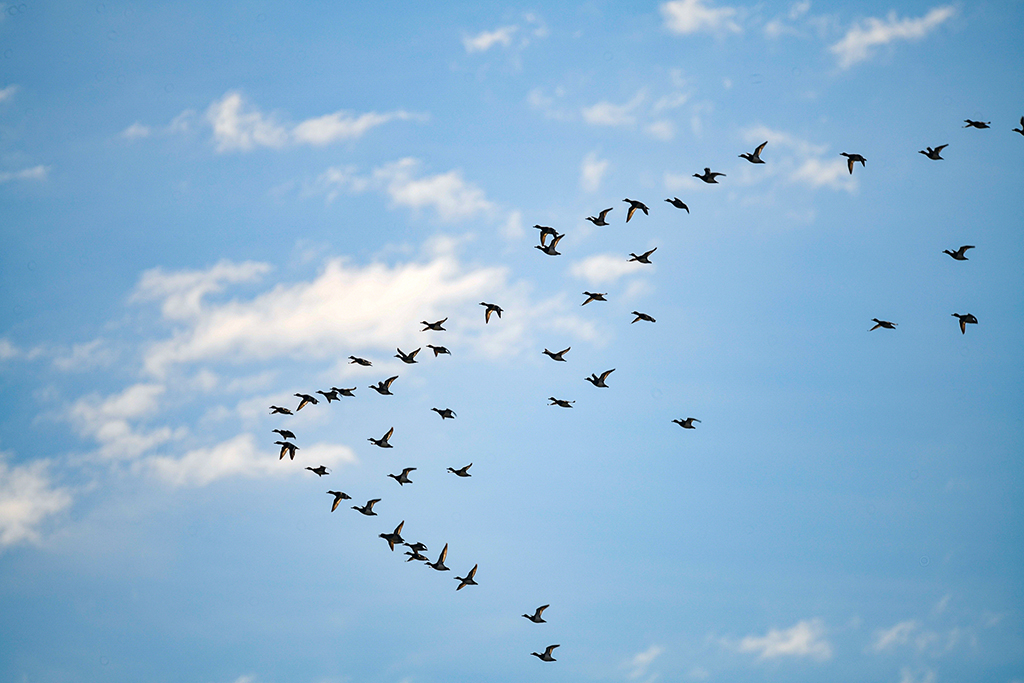