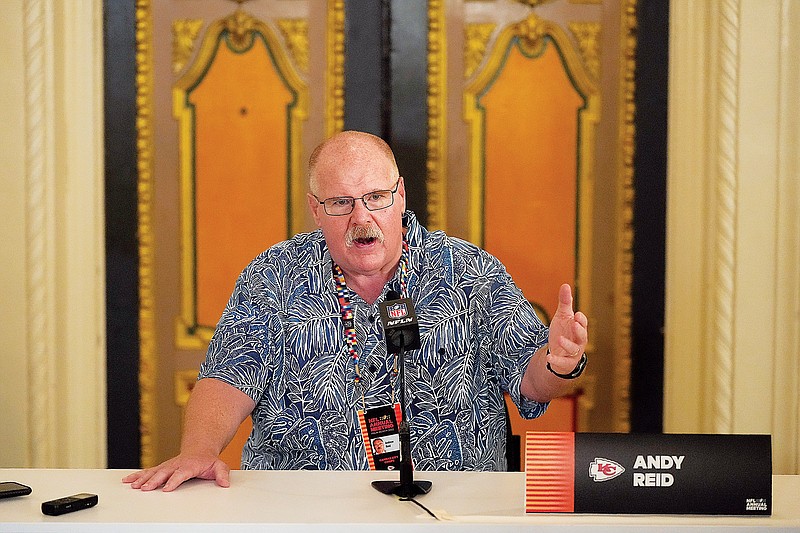 KANSAS CITY -- The Kansas City Chiefs were supposed to be quiet during free agency, given the perennial AFC West champions had most of their big names tied up in long-term contracts and they already were bumping up against the salary cap.

Brett Veach had other ideas.

The uber-aggressive Chiefs general manager instead made a splash by signing former Texans safety Justin Reid and former Steelers wide receiver JuJu Smith-Schuster, then turned the NFL on its head by swinging a blockbuster trade that sent three-time All-Pro wide receiver Tyreek Hill to the Dolphins for a package of draft picks.

All of a sudden, the Chiefs have become one of the league’s busiest teams in the run-up to April’s draft.

It all makes the Chiefs something of an anomaly in the NFL: a team that contended for a championship last season but was willing to remake a major part of its roster for a chance at winning another one this season.

“For me, it came down to (several) teams,” Jones said Sunday, “and at the end, I just wanted to be in a situation where I have the best chance to compete for that second (Super Bowl) ring and make my mark on the game.”

That’s what the Chiefs want from him, too.

For one thing, the Chiefs still have cash available, and they have been linked to veteran cornerback Stephon Gilmore as they try to replace the departed Charvarius Ward. For another, they have two selections in each of the first four rounds of the draft and 12 in all, giving them the freedom to do just about anything they want when it begins April 28.

They could still use a game-changing wide receiver to replace Hill, though his departure and subsequent record-breaking contract extension in Miami is one of the big reasons that Valdes-Scantling signed on in Kansas City.

“It was a huge decision,” he said. “I think that with the departure of (Hill), it gave me a really good opportunity to be in a position to come in and be an immediate impact right away. So, I think that was a huge factor into it.”

The close-knit locker room in Kansas City already has welcomed the influx of new players, often with tweets -- Mahomes has been particularly active -- and other social media posts. But in some cases, there are bonds already in place that should help to grease the transition from last year’s team that lost in the AFC title game to this year’s bunch.

Jones and Smith-Schuster played together at Southern California, for example. Reid and Christian both came from Houston. And in just about every other case, the newcomers have played against the Chiefs plenty of times through the years.

“We respect each other’s games,” Smith-Schuster said, “so now it’s time to put it all together.”

They’d better do it quickly. The AFC West, a division the Chiefs have dominated, has become arguably the toughest in the NFL. Russell Wilson is now slinging passes in Denver, where Randy Gregory was brought in to bring down opposing QBs; the Raiders brought in their own pass rusher in Chandler Jones while adding Valdes-Scantling’s former teammate, Davante Adams; and the Chargers landed one of the league’s top cornerbacks, J.C. Jackson.

The Chiefs still have Mahomes, though. They still have Kelce in the passing game, Clark and Jones getting after the other quarterback, and they still have Andy Reid’s offensive genius standing on the sideline.

In fact, Reid has played a big part in landing some of the big free agents suddenly calling Kansas City home.

“It’s one thing for a head coach who just won the Lombardi Trophy -- for them to text me personally, it means a lot,” Smith-Schuster said. “And going into this year’s process, K.C. has been on me for the past two years. Obviously, I feel welcome here and appreciated. So, coming here and having the opportunity to play here for him is a great experience.”